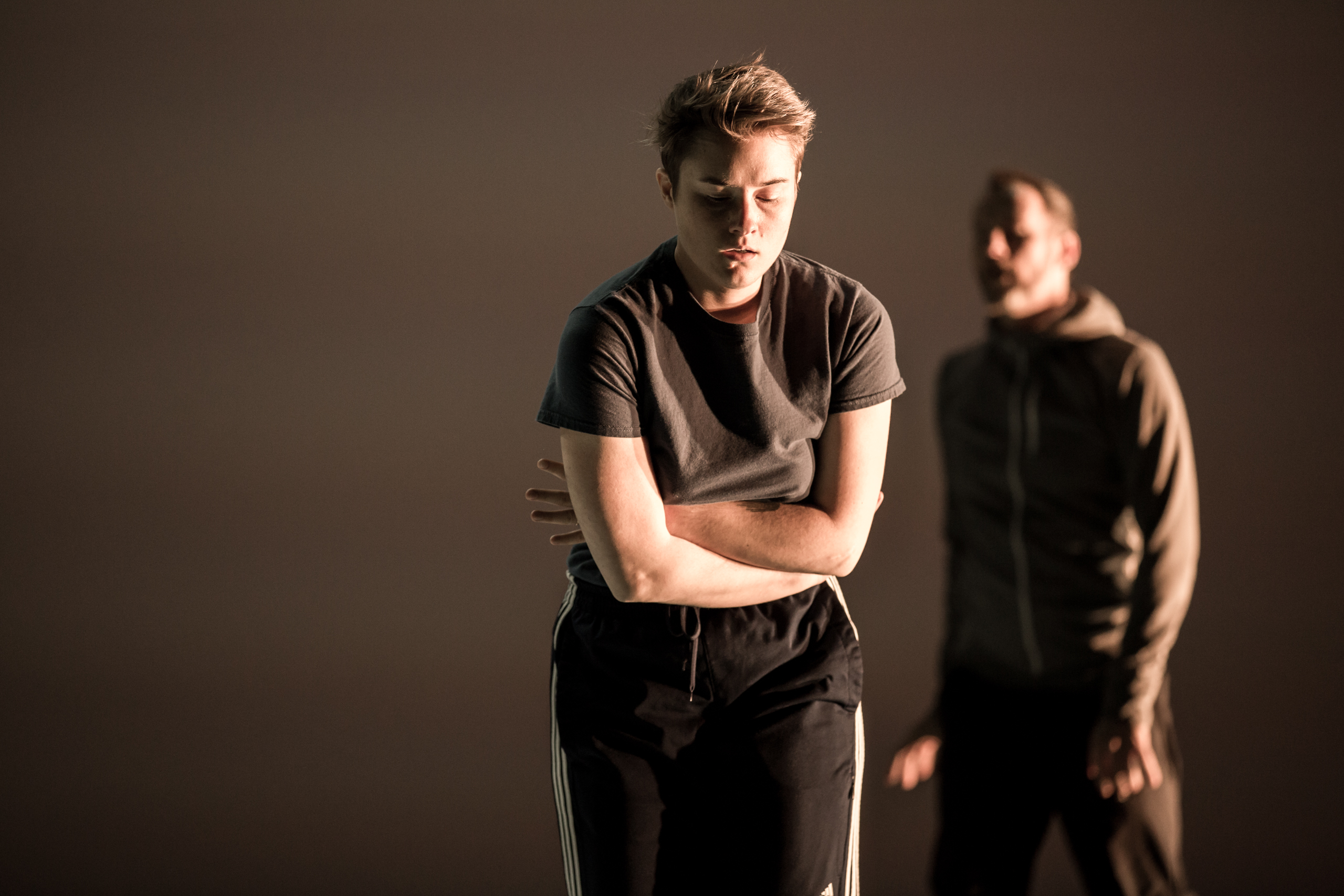 For years, Molly Shanahan, independently and through her company Mad Shak, has meticulously examined the alchemy that occurs between performer and audience. Not just what happens to the performer on stage—the gaze of an audience cloaked in darkness is a fearsome, intoxicating force any performing artist can attest to—but what happens to the observer through the act of watching, and the energetic space between all involved.

“Of Whales…,” Shanahan’s latest experiment, at Dovetail Studios, reveals a longtime research in presence and awareness that has reached subatomic levels. In the course of fifty minutes, Shanahan and her four fellow dancers transform customary expectations of the audience-performer relationship. Don’t get me wrong; none of the dancers walk into the audience—which is comprised of a single row of chairs at the far end of the Dovetail Studio floor—no attendees are pulled from their seats or asked to move, call back, clap or “do” anything, at least externally. But the invitation to complete attentiveness, to be as deeply curious about the movements and the shared moment as the dancers are themselves is powerful, unstoppable even, yet achieved through gentleness, vulnerability and honesty that can best be described as rigorous.

The disarming of the audience happens somatically; a few minutes into the piece the Mad Shak dancers fall into coordinated breath—not forced timing of inhales and exhales, but a harmonious pacing, much the same way the unison sections prioritize individual authenticity over perfect synchronicity—and the vital signs of the audience follow suit; one can feel the pulse and breath of everyone in the room slow, and their muscles relax into a receptive physical state. “Of Whales…” unfolds as a performance not just to be seen and heard, but inhaled and felt in the blood, perceived with deep, subconscious centers of the brain. Shanahan is obsessive about understanding and dismantling the posturing, self-watching, judging armor put on in performance and, by continually pointing out and weeding out these habits in herself, compelling the audience to do the same. Which, as a critic, I tell you, is equal parts scary and liberating. Judgment is power and, as such, provides a safe wall behind which the viewer becomes voyeur. It also can (and often does) separate the professional critic and casual viewer alike from having a complete experience. In the classic Myers-Briggs model, judging stands in opposition to perceiving; when we are busy asking ourselves what we think about a thing that just happened, we are no longer experiencing what is happening now, but instead engaging ourselves in some internal dialogue that winds up being more wrapped up in our accumulated experiences, biases and categorical means of trying to make sense of things than in perceiving the reality of the moment.

Shanahan and her dancers coax everyone in the room away from this overused churning, judging brain toward deeper perception in large part through the attentiveness they give each other; sometimes standing still and watching a solo, sometimes through cascading movements transmitted via breath, sometimes through touch—soft touch always, the back of a hand or a cheek laid on a back. Through years of this work Shanahan and her longtime collaborators Kristina Fluty and Jeff Hancock vibrate on the same plane; it’s like they stepped through the same wormhole into a dimension with additional modes of non-verbal communication. The younger company members, Megan Klein—a powerful, compelling performer—and Detroit-based Maria DiMarzio, the newest addition to Mad Shak, show great promise, but the sensitivity and subtlety of Shanahan, Fluty and Hancock is of a quality that can be cultivated only over decades. I would pay the $18 to watch Hancock eat breakfast cereal for a half hour; his seeming complete confidence and ease with this way of being under the lights stands in fascinating contrast to Shanahan, who visibly grapples with her demons, with her complex relationship between her “real” and her “fake” which provide the thesis for the show and which ultimately are exposed as one and the same. (Sharon Hoyer)