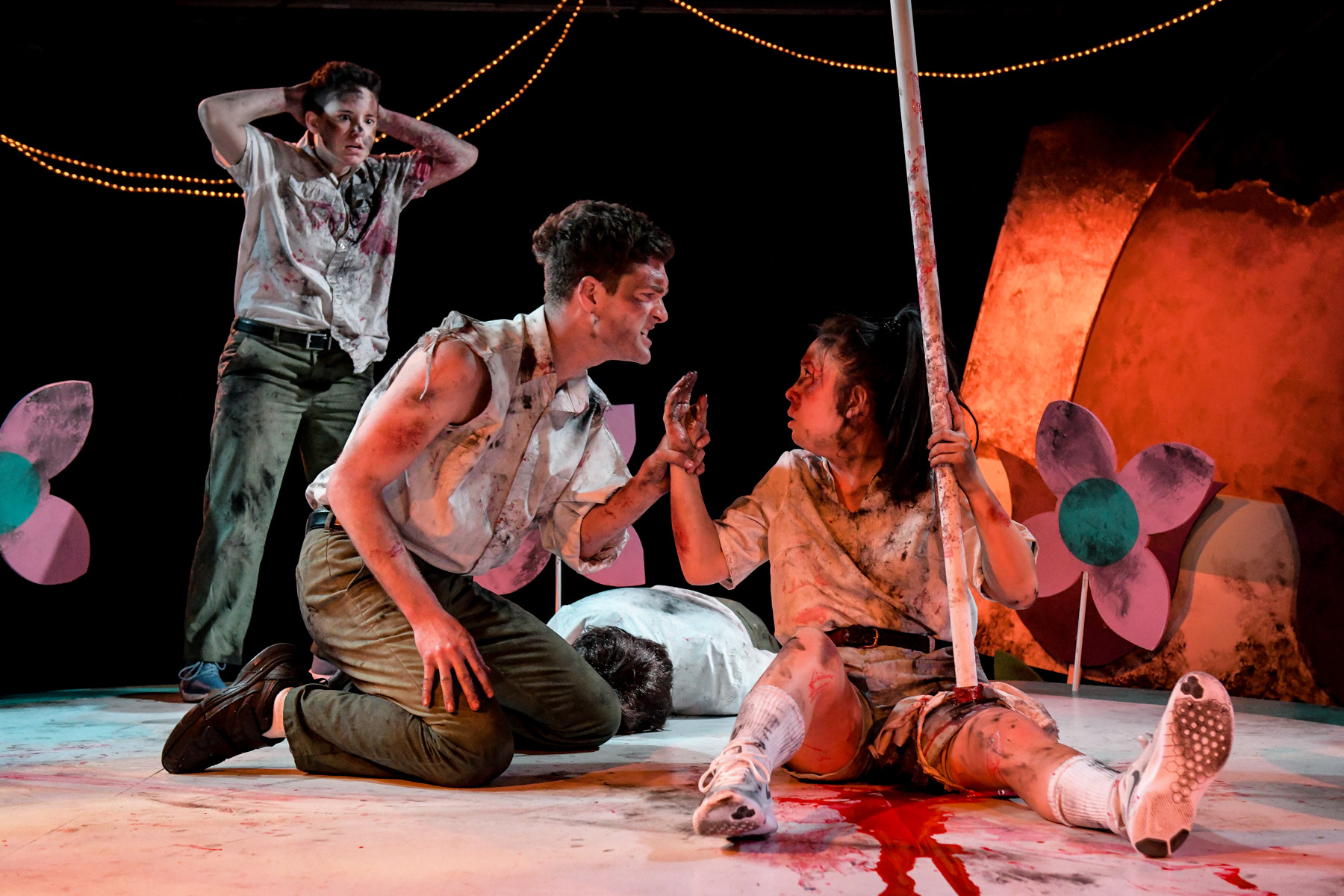 “Small World,” the acidly funny, semi-gross-out comedy having its world premiere at The New Colony, is animated by a modern-day vision of hell that outstrips in pure horror the imaginings of Dante or Hieronymus Bosch. This one-act play, which takes place in eighty-five bleak real-time minutes, portrays the End of Days (maybe) as it might play out in Disney World. As a trio of surviving Disney workers, trapped inside the title ride, contemplate the possible cosmic catastrophe around them and their own dire situation, the over-familiar Disney theme song plays over and over, adding Muzak to the terrors of the apocalypse.

Located somewhere between Sartre’s “No Exit,” the Rapture-themed “Left Behind” series and “South Park,” Jillian Leff and Joe Lino’s play is simultaneously sardonic, philosophical and surprisingly open-hearted. Under Andrew Hobgood’s go-for-broke direction, the show generates a rich range of feeling out of its blackly farcical premise. While the story doesn’t quite come together in the end, and there are occasional dead spots and one flat character, the play has a significant narrative arc, one that carries us from the smiley-face banality of the Disney fun factory to somewhere both sadder and stranger.

The comically gifted Stephanie Shum is Kim, the more-than-gung-ho employee whose absolute loyalty to the Disney way is rooted in an emotionally deprived childhood, when cartoon princesses were her only friends. The fact that a pole is protruding from her bleeding thigh doesn’t affect the attitude of this true believer, who finds comfort in her personal bible, the company’s employee handbook. Her opposite number is Donny, played with crazed aplomb by Patriac Coakley. Like Kim, Donny once identified with Disney as a child. But now he’s disillusioned, and his hatred of Mickey and Donald (his namesake) has swollen to terrorist dimensions. Mediating between the princess and villain is Becca (Jackie Seijo), a depressed Everyworker too immersed in her own bad conscience to notice much or to care.

Kudos to set designer Sotirios Livaditis, who—assisted by Alon Stotter’s murky lighting and Erik Siegling’s pointedly repetitive soundtrack—gives form to this shattered corporate paradise. It’s the perfect setting for this meditation on the nature of belief in a post-religious society, where pop culture is the binding myth, HR guidelines are the only shared morality and death is viewed as something bad for the brand.

When Kim is center stage, exuding an alternately droll and moving blend of conformity and vulnerability, the show is vibrant and alive. When she’s not, it loses focus, and the play’s flaws become more apparent. These include Becca’s vibe-killing cynicism, which doesn’t mesh with the play’s overall kookiness or the culty obsessiveness of the two more active and interesting characters. Also, we never find out the nature of the disaster that occurred in the real world outside the Magic Kingdom, meaning we don’t know if we’re witnessing the Mouse-exterminating conspiracy of Donny’s lunatic pals or the Book of Revelation in action.

But maybe it doesn’t matter. The characters are so detached from any larger context or actual social bonds that the idea of a “real world” beyond the park walls seems moot. The media universe and its commodified images are all they have. At the end, a forlorn employee breaks into the loathed “Small World” refrain, whose absence has become unbearable. It’s a complex and melancholy theatrical moment, as the chirpy melody becomes a minor-key elegy to the collapse of human connection. It’s a small world after all and a lonely one. (Hugh Iglarsh)