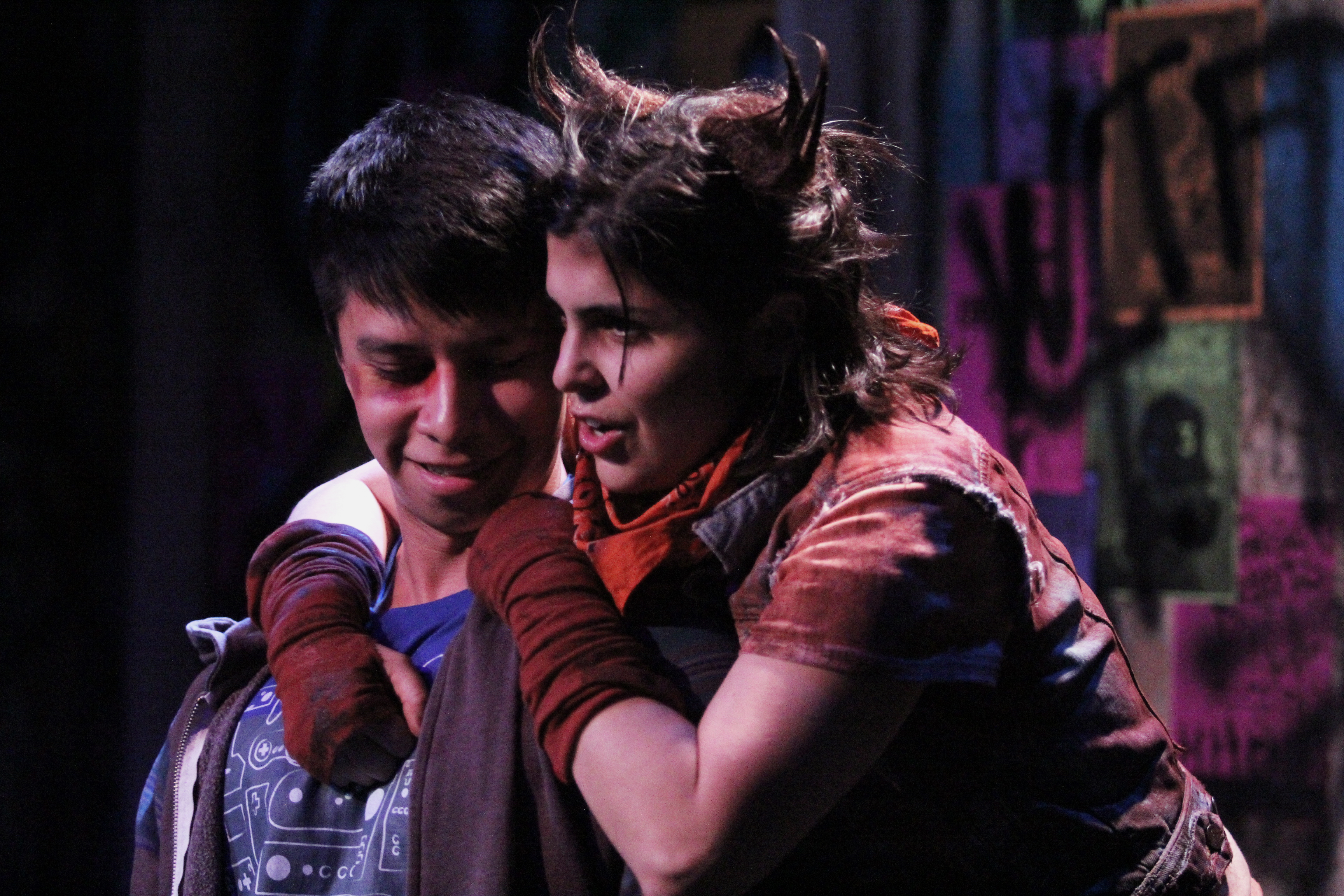 During a pivotal moment of Rita Kalnejais’ anthropo/zoo-morphic love story, in its long-awaited Midwest premiere at Steep Theatre, the song “Strong in the Real Way” from Cartoon Network’s hit series “Steven Universe” pawed its way into my head. And while the respective contexts between Kalnejais’ play and Rebecca Sugar’s show are certainly different, the parallels of punishment as protection (and vice versa) in parenting are prevalent in both as are themes of family, friendship and their fraught boundaries. Where the latter concerns an ageless young boy and his super guardians who aspire to “win the fight and then go out for pizza” (it’s more complicated than it sounds), the former traces a familiar narrative arc (think “Romeo + Juliet” meets “Princess Mononoke”), connecting two lost souls across the oldest kingdom there is.

The emotional and sensorial perception of strength and weakness figure highly in “First Love,” as two families fight for survival, socially and sexually. On the one side there is Redca (Isa Arciniegas), her sister (Jin Park), brother (Curtis Edward Jackson) and mother (Lucy Carapetyan), the latter doing her best to raise her children, alternatingly needy and impetuous, in the absence of a father figure. A mirror of this unbalanced family unit is found in Basti (Jordan Arredondo), his father (Jose Nateras) and their upstairs neighbor (Destini Huston). In both clans, tension over unspoken trauma reigns as parents attempt to instill (or inflict) their own inherited values in their offspring. Violence preempts more violence as the so-called nature of man and beast alike foments into destiny.

The actors here are not so much heart-on-sleeve as heart-in-teeth, in a physical and demanding display of their multitudinous abilities and tireless dedication. As her performances in “The Wolves” and “We’re Gonna Die” exemplified, Isa Arciniegas has a deft and compelling ability to maneuver between vulnerability and authority, every ounce of which is used in this production. Curtis Edward Jackson is an actor of some deep, almost mythological talent who is also capable of being seriously hilarious, delivering lines like “I didn’t fuck that cat!” with all the intention and specificity that great comedy (and drama) demands. Steep ensemble members Alex Gillmor and Lucy Carapetyan are by turns nurturing presences and comic relief and I would happily stream their chicken-themed spinoff series.

As Basti, Jordan Arredondo’s performance is a case study in the formation of fragile masculinity. At fourteen, Basti is already weaponizing generosity and exhibiting troublingly possessive traits that are modeled, unsurprisingly, by his in-all-likelihood alcoholic father. In their ensuing romantic entanglement, Redca and Basti exemplify the essential differences between vulnerability and insecurity, which are often intentionally misrepresented in cultures, such as our own, that value dominance over all else. In a binary world, existing in the in-between can be liberating but it can also be dangerous, as the ensuing bloodbath, which gives even “Game of Thrones” a run for its money, lays tragically bare.

These deaths, staged with precision and inspiration by Devon de Mayo—with a bevy of brilliant designers in tow including Arnel Sancianco (set), Heather Sparling (lights), Jeffrey Levin (sound and original music), Mieka van der Ploeg (costumes), and Emma Cullimore (props)—form their own kind of binary with a nurturing physicality that places the talents of intimacy director and company member Sasha Smith and violence directors Rachel Flesher and Zach Payne at the forefront of this production. There are several discomforting moments in “First Love” but they are handled with tact and grace to an end always greater than they might have been. On paper, so much of this play seems primed for going sideways, but this production steers adroitly toward poignancy and pathos while delivering on the latent comedy of its premise.

As a company, Steep has an understated knack for blending realism with the fantastic. And while this penchant tends to manifest in productions that draw the lunacy out of the everyday (“Birdland,” “Earthquakes in London,” “Hinter,” “Bobbie Clearly,” “Posh”), the company also executes the reverse expertly, finding the mundane in the incredible, often to startling results, as in “Brilliant Adventures” and “Hookman.”

“First Love” is an entry into this second category and is, frankly, a welcome one. Not that Kalnejais doesn’t have plenty to teach us about human and animal nature. (Begin by asking yourself, “What’s the difference?”) Yet, in filtering these values and reflections through a conceit that is unapologetically curious, even child-like (a term that gets a bad rap in our play-pretend grownup world), she can be instructive without descending into didacticism. This play and its production are open, gracious and unexpected, like when you’ve slipped and had the wind knocked out of you only to discover what a breathtaking shade of blue the sky is from your position on the ground. Which, incidentally, could also describe the feeling of falling in love for the first time. Both are worth remembering and both can be found, if you too are curious and open, within this production’s fleeting run. (Kevin Greene)