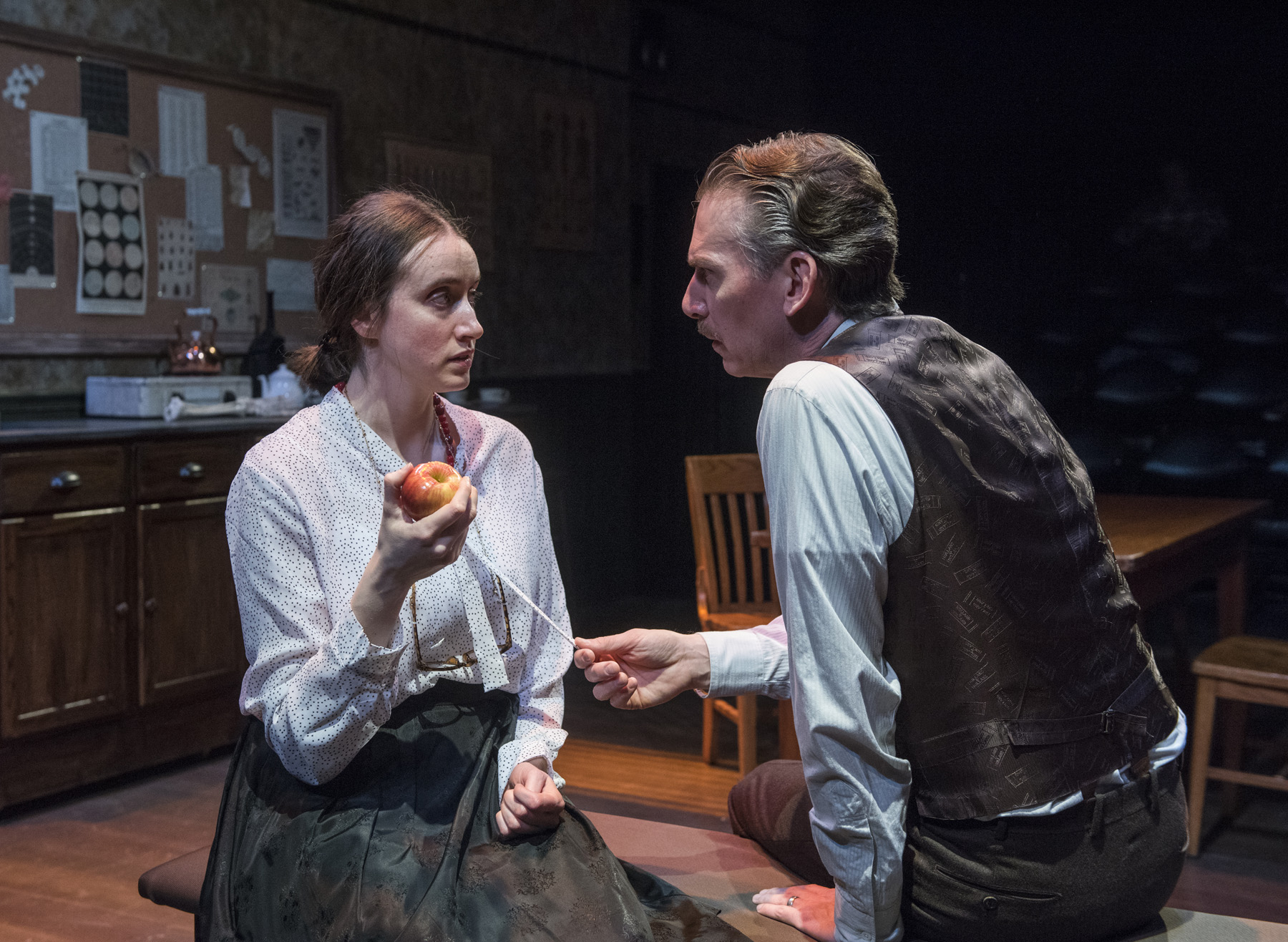 There’s a potent theatrical moment toward the end of Kate Fodor’s “Hannah and Martin,” the 2003 play now being revived at Shattered Globe about the fraught relationship between Nazi-tainted German philosopher Martin Heidegger and Hannah Arendt, his German-Jewish student and one-time lover. It’s 1946, and Heidegger has been banned from teaching by the Allied occupation forces as part of postwar de-Nazification. In a climactic scene, he remonstrates with Arendt, asking her to intercede for him. She rebuffs her old mentor, demanding to know how one of Europe’s foremost thinkers could become Hitler’s useful idiot. In response, he puts on a recording of a Wagner overture. As the florid music swells and becomes implausibly loud, Heidegger’s face beams with orgasmic delight. “Can you feel it?” he asks, in a kind of trance. We realize we’ve entered Heidegger’s mind, in which reality is an aesthetic experience, an internalized opera with himself as Wagnerian hero.

It’s all you need to know about the politics and personhood of this dramatized version of Heidegger and it’s conveyed with few words and great skill.

Would that the rest of this talky, equivocal play had just a touch of that tableau’s clarity and economy. A play about philosophers—not just Arendt and Heidegger but also Arendt’s second teacher Karl Jaspers (Doug McDade) and first husband Gunther Stern (Steve Peebles)—can be forgiven a certain verbosity. But under Louis Contey’s direction, the production never moves from ivory tower to real world. Maintaining a safe neutrality, the play seems to suggest that there are, if not very fine people on both sides, then at least forgivably naïve ones. The show is nicely staged, with Nick Mozak’s tripartite set design featuring domestic spaces encompassed within outer schoolroom walls. But like Heidegger’s writings, Fodor’s script often seems willfully opaque, ending on a note of ambivalence that’s more baffling than provocative.

A major part of the problem is the weakly drawn portrait of Hannah Arendt, who would go on years later to write “Eichmann in Jerusalem,” her study in what she famously termed “the banality of evil.” She’s characterized here as anxious, indecisive and more than a little passive. Fully twenty-two years pass between the first and second acts, yet Arendt—played stiffly by Christina Gorman—still seems a sheltered ingénue at age forty, despite having narrowly escaped deportation to Auschwitz while interned in occupied France. And she appears to remain at least partly under the dark spell of the lover who long ago dumped her to placate his jealous wife (Cortney McKenna, who is subtly sinister) and keep scandal away from his career path.

There’s little Heidegger wouldn’t do to advance his rise to power and influence in 1930s Germany, including joining the Nazi Party and attempting to make the University of Freiburg, of which he became rector in 1933, a model of fascist pedagogy, declaring that “the Führer is Germany’s only reality and law.” For him, anti-Semitism is a regrettable side issue of the party he embraces, one that he manages to ignore, no easy task. Lawrence Grimm is scary-good as Heidegger, giving a layered performance that captures his charisma—as when the thirty-five-year-old professor seduces his gifted but insecure eighteen-year-old student—as well as his narcissism and self-pity. Asked by Arendt why he’s never renounced his past actions and beliefs, Heidegger snaps, “I will apologize to the world when Hitler comes down to apologize to me!” How do you forgive someone who feels no remorse? Caught in the past, aware of her debt to Heidegger, Arendt wavers. Jaspers is less charitable: “He has shown with his life that his thinking is flawed.”

The play’s strength is its literate and sophisticated dialogue. However, the script is too often articulate without being dramatically purposeful or psychologically revealing. The question driving the work is whether Arendt will write a letter of support for Heidegger, a man whom she concedes has blood on his hands. This central plot point is not resolved cleanly, producing a note of anticlimax and confusion around Arendt and her young and idealistic assistant, Alice (Jazzma Pryor).

In general, the second act seems like a muddled replay of the first. There’s little sense that the world in 1946 was a different place than in 1924, in the wake of death camps and atom bombs and total war. The play’s failure to convey that difference shows that it’s more about celebrity than history. Arendt’s most famous book plumbs the banality of evil; “Hannah and Martin” does the opposite, demonstrating the evil of banality at a time when fascism is once again on the rise. (Hugh Iglarsh)