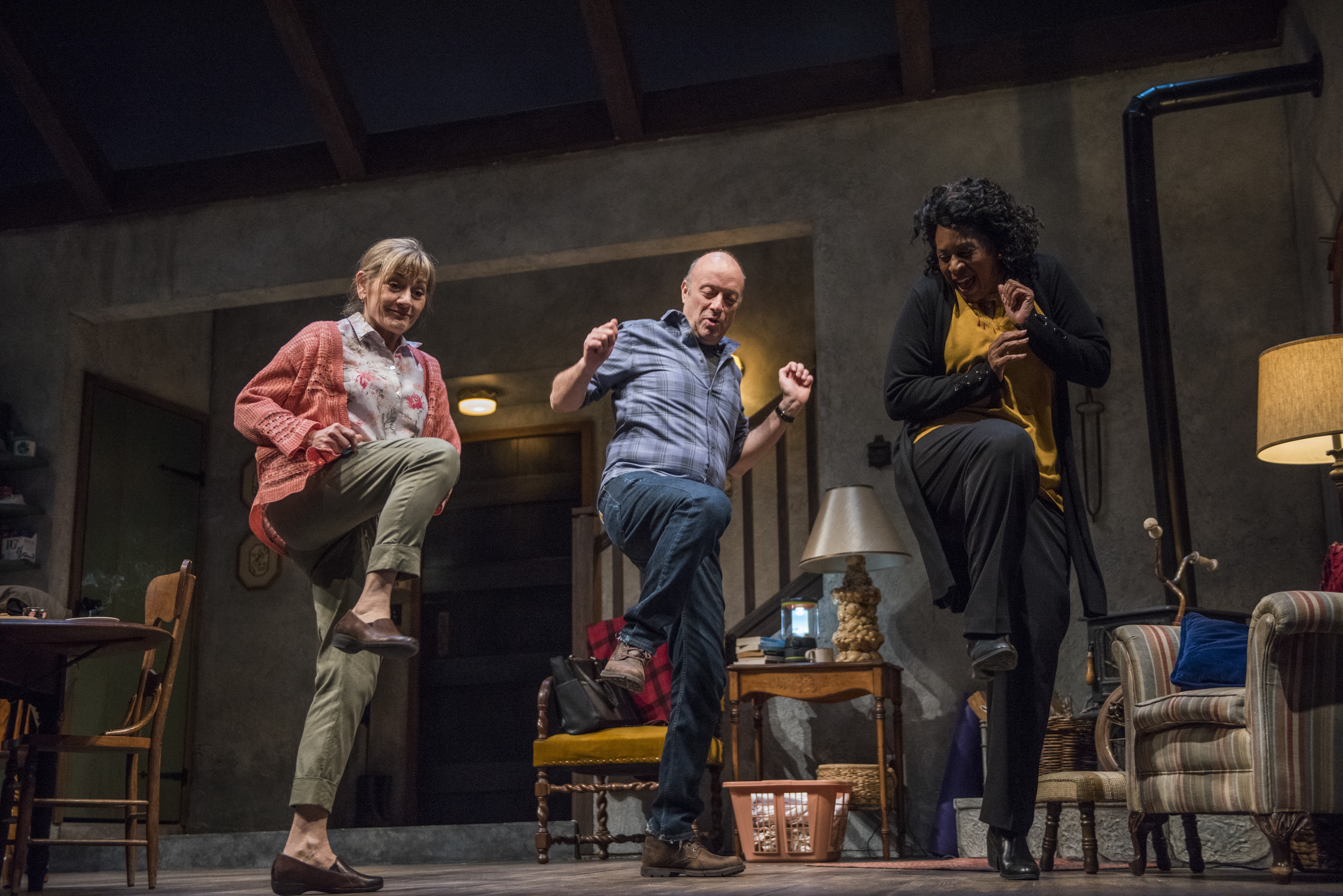 The way I see it, a play should contain the following:

Lucy Kirkwood’s “The Children,” receiving its local premiere at Steppenwolf under the mature direction of Jonathan Berry, has all of these things and so is, by this definition, a play.

Another definition I’m partial to is “two or more people, with secrets, getting drunk together.” Call it the SteppenTest™. Kirkwood’s play passes this one, too.

The play-ness of this play took me some time to get past. Perhaps it was due to my semi-regular diet of the up-close-and-personal brand of storefront strangeness our city is rightfully known for. Or maybe, having missed the last few productions in the company’s Downstairs Theatre, I had suffered some amnesia in regards to the grandeur (and the distance) these productions entail. Or more likely still: the literal chasm between the audience and the cottage that serves as the set. Seldom have I felt so far away in the fourth row.

Whatever the reasons were, I could feel myself counting beats, ticking off dramatic moments like theatrical bingo. Strong opening image? B. Amusing, if discursive, dialogue? I. The establishment of personal philosophy via metaphor? N. The slow revelation of latent hostilities passing as acerbic wit? G. Secrets, secrets, secrets?

It’s not that I wasn’t swept up. It’s nigh impossible not to be. The individual talents and chemistry between Ora Jones, Janet Ulrich Brooks and Yasen Peyankov allow this play to move through its one-hundred intermission-less minutes at a contemplative trot, pausing here and there for dramatic vistas and philosophic waxing on the nature of nature, personal agency, social responsibility and the value of life. The play concerns three nuclear engineers, a collapsed power plant and a sense of ecological dread that should be instantly recognizable to anyone who’s attempted to watch a nature documentary in the last ten years.

Being a millennial in a crowd of predominantly boomers, Kirkwood’s play permitted me a sense of warmth toward the familiar internal logic of a generation I can sometimes feel personally at odds with. In her mid-sixties, Hazel (Ulrich Brooks) represents the first generation of women presented with the confounding gift of “having it all.” She has successfully raised a family and pursued a career and thus feels entitled to living out the rest of her days in peace, subsisting on a diet of salad, yoga and mantras. “If you’re not going to grow, don’t live,” she tells Rose (Jones), straight-faced. A paradigm of English repression, Hazel is dying to live. In contrast, her husband, Robin (Peyankov), is living in order to die. At one point he refers to the human body as “rented meat,” which is the grossest and most memorable two-word phrase I’ve had the pleasure of hearing in some time.

The play is replete with references to animals and their byproducts, extending the definition of the former to include humans and the latter to their offspring. This literary inclination is occasionally a bit on-the-nose—I counted three references to eggs within the first ten minutes—although it is also regularly poignant, too. “The Children” contains discussions about parties and Kirkwood’s play itself possesses the tone of conversations you might have at social gatherings, straining past awkward explanations of work and life while waltzing around the landmines of etiquette and desire. It’s a lovely bit of choreography and I found myself enjoying the play most when it seemed to be going nowhere. Case in point: I could listen to Ora Jones describe watching someone smoke a cigarette for hours and never tire.

But, alas, there is a story to tell.

The drama turns on the question of one generation’s responsibility to the next, although not in the direction we are accustomed to hearing about. The youth are more a psychic than physical presence, made manifest in the anxieties of the characters on stage, each keenly aware of their increasingly liminal state. And while the childless Rose becomes, for a span of time in the play’s back half, an audience to the compounded conflicts and fermented frustrations between the long-married couple she has intruded on, whose oldest child is nearly forty and still in desperate need of her parents’ emotional support, she is also something like an angel of death, albeit an endearingly self-defeating one. In one of the play’s most compelling moments, she monologues about all the ways she had hoped to one day “grow up,” including “knowing when I’ve had enough,” a reference both to Robin’s homemade wine as well as to deeper, more insatiable desires that have guided her away from the so-called straight and narrow, a path she sees Hazel following in lockstep. Because this is a drama, the two women eventually learn that they are mistaken in their perceptions (and projections) of the other. It’s all—as the kids of the Cold War era might say—neat.

With “The Children,” Kirkwood does what her male peers seem so unfailingly incapable of: centering a story on women even in the presence of a loud, opinionated and self-anointed mediocre man. For his part, Robin is more nuanced than the antiheroes who’ve pouted about the boards at Steppenwolf in recent years, and Payenkov’s performance is sweet and subtle. But this play is designed for Jones and Ulrich Brooks: the former demonstrating an emotional range beyond her established comedic chops; the latter being a Chicago treasure that deserved every deafening decibel of our applause on opening night.

“The Children” is unlikely to be one of the most talked-about shows of this season. And that’s fine. As we’ve established: it’s a play. But there is pleasure in seeing a thing executed effectively, with specificity and skill. And not for nothing: if you reach across the precarious chasm, it will meet you. (Kevin Greene)