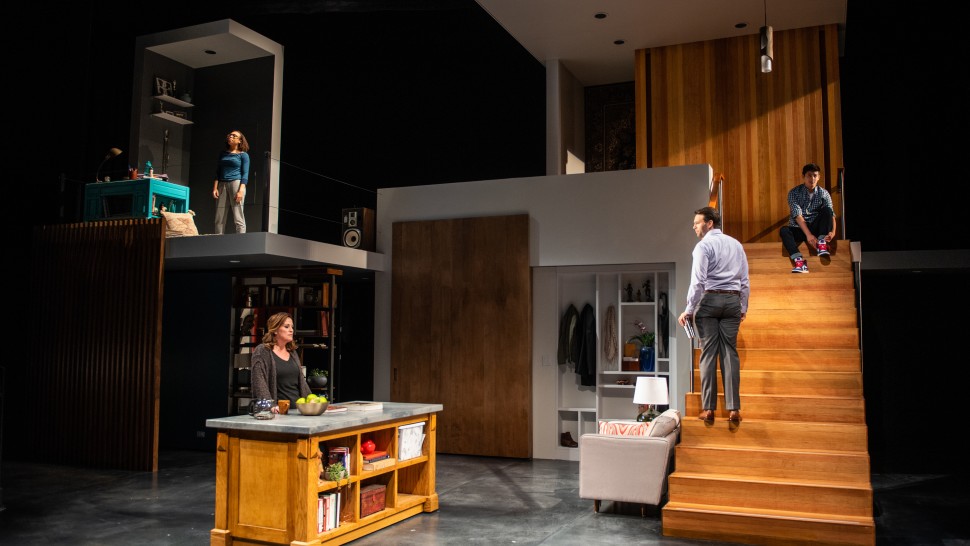 “Next To Normal” gives the musical theater treatment to a story with such gut-wrenchingly contemporary themes as bipolar disorder, pharmaceutical mayhem and doctoral malpractice. It explores the struggles of a more “normal” American family than some might expect and even more might be unwilling to admit recognizing all too well. It is no mean feat to tell such a story in this format, but since Sondheim popped priests into pies, all bets are off. Tom Kitt’s rock score, set to the lyrics of Brian Yorkey, give Yorkey’s book a believability that power ballads and patter songs might not support.

Director David Cromer’s cast brings the characters to life fearlessly and, for the most part, handles the challenges of the music with aplomb. David Schlumpf is heartbreaking as the father who struggles silently with his own depression and denial, burying it all in order to care for his wife, who was diagnosed with a serious illness after failing to recover from the grief of their lost son. As the “invisible” daughter, Kyrie Courter gets it just right, creating a character that looks to have it all together but, due to her outside circumstances, is only a hopscotch jump from a precipice. Liam Oh is terrific as the son who, although suffering death as an infant, continues to grow to near-adulthood in his mother’s disoriented mind; he belts insistently and shifts seamlessly from rock to dialogue. This young artist is one to watch.

As the daughter’s boyfriend, Alex Levy presents an amalgam of goofy and loving that is the thing we all hope our children will bring home to dinner, warts and all. As the doctor, Gabriel Ruiz gives his usual strong performances and confidently tackles moments of comedy that must shift immediately into something else. I was unable to discern whether the vocal stylings of Keely Vasquez, as the emotionally and mentally scarred mother, were conscious choices or connected to vocal disquiet.

The true star of the show is Cromer, who returns to Writers after winning the Tony Award for Best Director with Broadway’s “The Band’s Visit.” This production is slick and shiny, while the movement of set-pieces and actors show as jagged against that backdrop. His “Normal” is an inside-out, outside-in exercise, examining the family’s plight from the perspective of the guests (the audience) and from deep inside the residents of this house of cards, giving the story every opportunity to sing.

Late in the second act, the mother suggests, with newfound clarity, that perhaps her troubles were never in her brain or in her blood but were lodged in her soul. Are we all capable of mental and emotional slippage, given the just-right trigger, as some say we are all capable of violence or even murder? Don’t miss the opportunity to consider this conundrum in the theater. Thinking it over on your couch is not the same as feeling the questioning tingles from the rest of the audience. (Aaron Hunt)