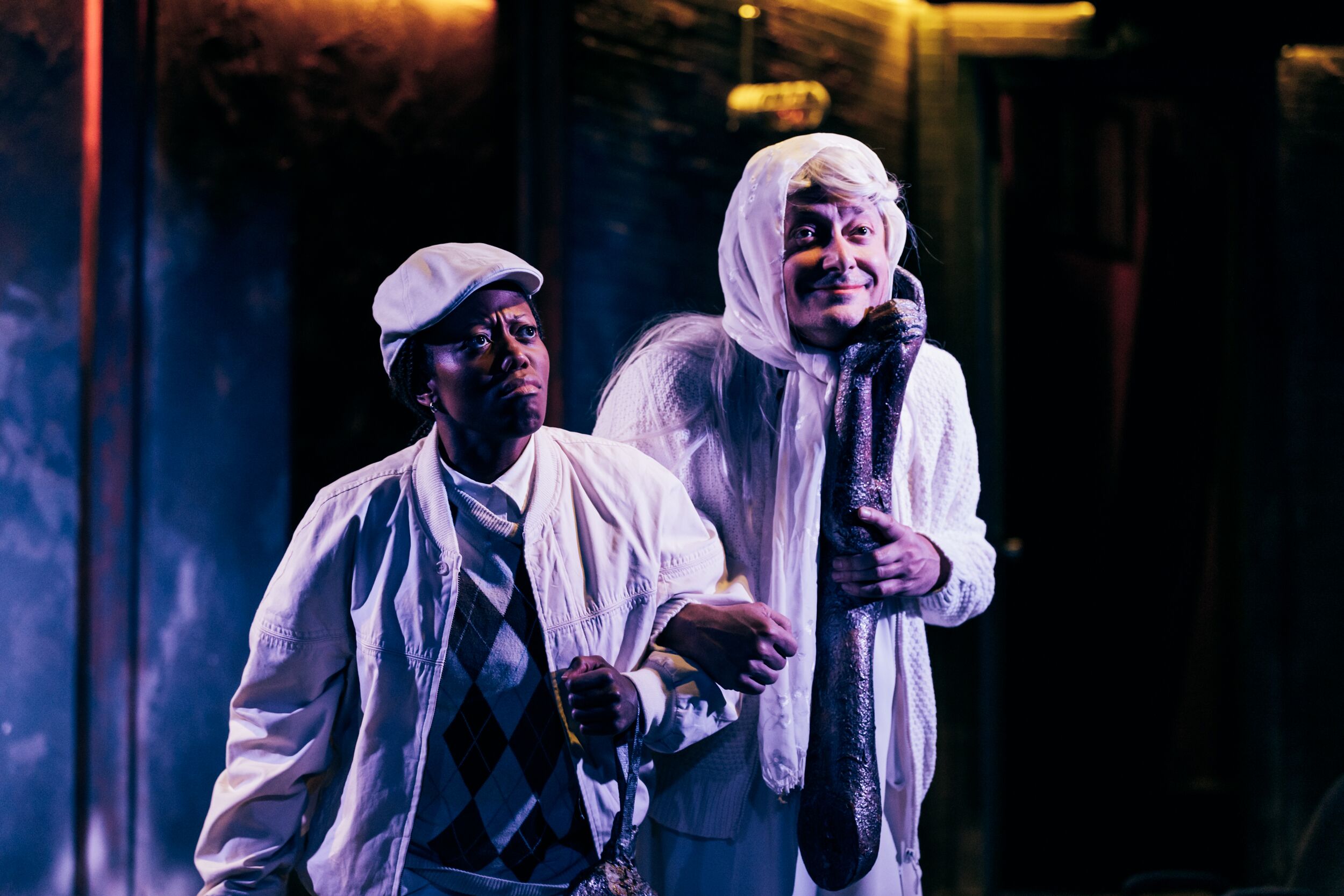 Back in 1958, the British critic Kenneth Tynan expressed the fear that the absurdist vision of playwright Eugene Ionesco would become “a gateway to the theatre of the future, that bleak new world from which the humanist heresies of faith in logic and belief in man will forever be banished.” Ionesco defended himself ably, contending that his anti-theater served the necessary function of “attacking clichés, empty formulas and slogans” of dead language and restoring theater to its “violently comic, violently dramatic” origins.

Twenty-five years after Ionesco’s death, the debate continues. A Red Orchid’s lively and artful if ultimately unsatisfying production of “Killing Game,” as directed by Dado, illustrates both sides of the argument. First produced in 1970, “Killing Game” is a later work by the Franco-Romanian author that has never achieved the popularity of “The Bald Soprano,” “The Chairs” and “Rhinoceros,” and with good reason. While the play has its share of classic Ionesco moments of inspired lunacy and cockeyed intellectual satire, there’s a sour, overkill quality to the script as a whole. As the death toll mounts to apocalyptic levels, and the stick-figure characters are engulfed in a shared doom without dignity or meaning, the question arises as to what exactly is irritating Ionesco: is it human folly or human existence itself?

There’s no real plot here, only a mysterious plague—an “epidemic that allows no hope”—that hits an unnamed city, wiping out thousands every week in every neighborhood, upscale and down-market alike. It begins on a typical Ionesco note, as interchangeable people exchange idiotic banter. (One conversation in this Apollo-era play is about the possibility of using horses to fly to the moon: “They can get horses to do anything these days.”) Suddenly, two babies in a carriage are found dead, and the corpses—and accusations—begin to pile up. Men and women, carrying sculpted body parts apparently symbolizing their mortality, die quickly and grotesquely, while a silent, hooded and just plain scary figure of Death (perfectly kitted out by costume designer Kotryna Hilko) stalks the stage.

The play is a progression of short, macabre scenes, some purely grim and others darkly funny, like a Monty Python version of Poe’s “Masque of the Red Death.” The wave of inexplicable suffering creates both terror and political dissension as the townsfolk blame the rich, the poor, the city council (personified by A Red Orchid celebrity ensemble member Michael Shannon in a video cameo) and each other. The progress-minded scientists studying the epidemic pompously declare that “death is a temptation of reactionaries”; it follows that “those who die are bad citizens.” The idea that it’s silly to make death a partisan issue is well taken, but the point is made so often in so many ways that the play’s anti-dogmatism comes off as dogmatic. The one break in the monotony is a gently paced, philosophical dialogue between a life-focused, spiritually enlightened old woman (played in drag by Lance Baker) and her equally-aged spouse (Angela Alise), a pessimist by temperament. Their honest, loving and thoughtful conversation is the polar opposite of the rage-fueled blame game and wishful denial that characterize most of the other snippets. Unfortunately, the scene’s humanity only serves to underscore the coldness and thinness of the rest of the play.

Director Dado, who last helmed Erik Satie’s rarely staged oddity “The Ruse of Medusa,” is specializing these days in vintage surrealism with a disco beat. Here she trots out fifty-seven varieties of dramatic technique, from quasi-realism to sung speech to dance numbers to a skillfully executed simultaneous dialogue, eliciting a mixed bag of performances from her thirteen heavily taxed performers. (The cast includes fifth-grader Katherine Mallen Kupferer, who is a talented child but a child nonetheless, and in this critic’s opinion too young for a play about, among other things, cannibalism.) The extreme theatricalization of this production goes against the grain of Ionesco’s language, which works best when delivered deadpan (so to speak) and also suggests a distrust of both audience and material.

Actually, there is much to distrust in this play, which lacks the energy, sly humor and underlying sanity of Ionesco’s better-known works. Death is indeed a fact and presence that defies and transcends ideology. However, Ionesco goes too far here, not merely pointing out the futility of managing or minimizing our mortality, but portraying the Grim Reaper as the answer to modern hubris and triviality. By siding with death, he reduces life to a cruel joke. (Hugh Iglarsh)