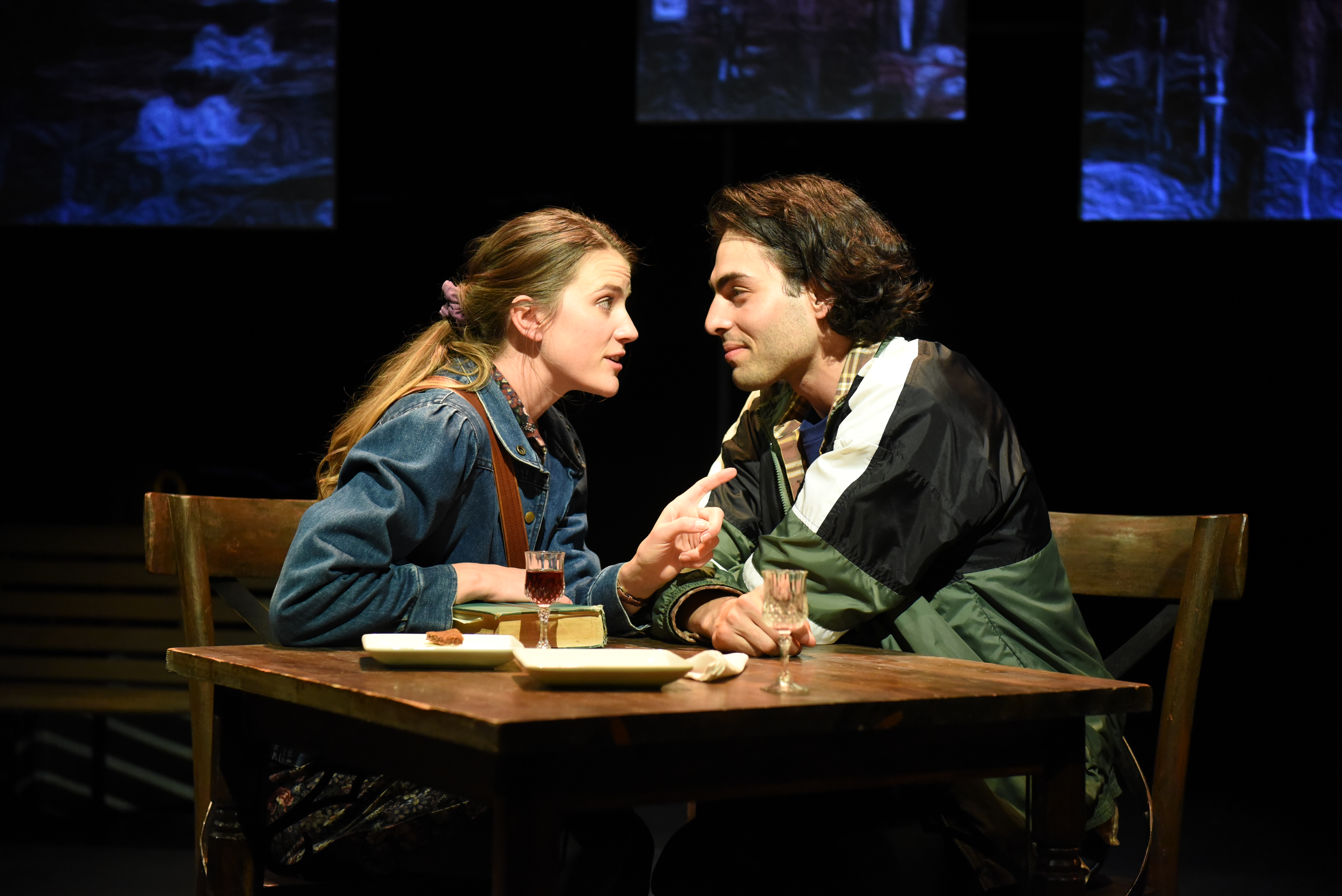 It was William Faulkner who famously said, “The past is never really dead. It isn’t even past.” That philosophy drives “Bloomsday,” a bittersweet little Möbius strip of a play by the talented and prolific Steven Dietz (whose “Mad Beat Hip & Gone” is playing concurrently at Promethean Theatre Ensemble). First produced in 2015, “Bloomsday” has been lovingly revived by director J. R. Sullivan, who gives us an evening of theater that’s as rich and smooth as a Guinness stout.

It’s a play of omission rather than action, portraying lives defined by an important event that didn’t happen thirty-five years ago. That’s when Robbie, a young American backpacker in Dublin, had his brief encounter with pretty but erratic Caithleen, who leads James Joyce-themed tourist walks. After a promising start, the green and timid Robbie is freaked out by Caithleen’s oddness and air of hungry intensity. He bolts, to his eternal regret and, to a somewhat lesser extent, hers. We know this because the play introduces us to the middle-aged Robert, the divorced, burned-out English professor that Robbie has become in the interim, as well as Cait, the scarred but resilient older version of Caithleen. Robbie/Robert, who in the interim has memorized “Ulysses,” a novel he doesn’t even like, has come back to Dublin in the present to see Cait/Caithleen, the living woman and her remembered younger self.

The two epochs of their lives meet and meld against the backdrop of “Bloomsday,” the June 16 festival where Joyce-loving folks in Dublin dress up in Edwardian duds and retrace the increasingly drunken path taken that day in 1904 by Leopold Bloom, the everyman hero of Joyce’s epic. In the novel, it’s a day that brings together all days, all situations, into one universal human moment.

If this description sounds confusing, it’s no less so on stage. “Bloomsday” is about atmosphere, of which it has plenty, and not narrative lucidity. Indeed, the whole point of the play is to pull us into Caithleen’s experience of time as a chord of simultaneity rather than a sequence of events. Dietz’s script raises some tough and maybe unanswerable questions, such as whose perspective the story is being told from, and how two characters can share precisely the same out-of-time, perhaps out-of-mind experiences. But there are rewards aplenty for those who can suspend rationality for the play’s two-hour length and surrender to its time-shifting, melancholic charm and aura of wistful romance.

As usual with Remy Bumppo, every aspect of the production is crisp and professional. Playwright Dietz’s dialogue is densely lyrical, and Sullivan’s well-cast actors do it justice, especially the Irish characters, who have a soulfulness untainted by blarney. The reliably superb Annabel Armour, as the older Cait, is the play’s most memorable figure, a bit quare, as the Irish say, but solid, smart and self-accepting. Jack DeCesare has a shaggy, appealing naturalness as the youthful Robbie and real chemistry with Bryce Gangel as the vulnerable Caithleen, who sees her own personality as jumbled up with that of Molly Bloom, Leopold’s wife and the sexy driving force of “Ulysses.” Shawn Douglass is intentionally bland and passive as Robert, a poster boy for midlife crisis who realizes that he is “made of something cold.” Scenic designer Jack Magaw’s austere set, complemented by Claire Chrzan’s hazy lighting, is like the barely sketched-in background of a dream. And Yeaji Kim’s multiple slide projections are the visual equivalent of Joyce’s novel, turning the small Theater Wit space into a memory collage of old Dublin, a place of intermingled culture and decay.

If there’s one complaint to be made about this literate and touching show, it’s that, like Robbie/Robert, it seems to lack ambition, drawing upon the setting and some of the superficial details of “Ulysses” but barely hinting at the novel’s scope and power. However, this play isn’t about Bloom, it’s about Bloomsday, that cosplay attempt to recapture an enchanted moment that keeps receding into history, like Robbie’s and Caithleen’s first and only kiss. The two (or four) characters here are seeking to understand a present that keeps looping back to the past and to live in the here and now as though the future weren’t in some sense always there. As Joyce understood, and this play makes clear, it is only through art that we can begin to make our peace with the complexities and paradoxes of time and memory. (Hugh Iglarsh)