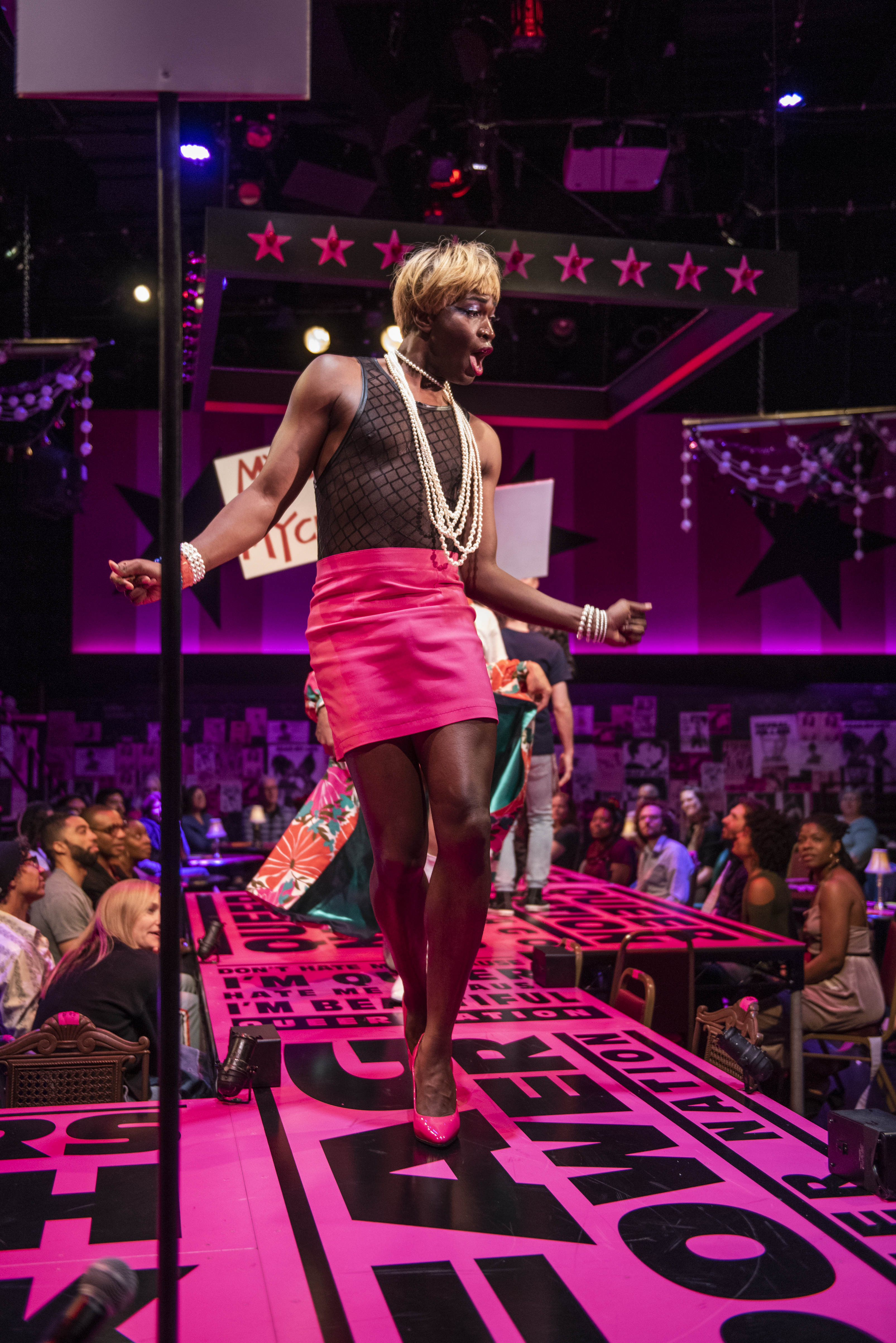 I remember the first time I put on lipstick in public. It was at a DIY house down in Pilsen, run by some college friends. I remember how powerful and vulnerable it felt to simply display. To wear a mustache with makeup was to respect a piece of myself that I hadn’t presented outside of performance. On that day, I felt just a little bit freer from my labels. Queerness, if nothing else, is celebration and liberation.

“It’s a farce!” Joan Jett Blakk shouts about politics (and herself) at Ann Sather on Belmont. She’s going to Madison Square Garden for the 1992 DNC. She’s going to break the wheel and be the party’s candi-dick (like candidate, but better).

Collaboratively constructed by Tarell Alvin McCraney and Tina Landau, “Ms. Blakk For President” is a show rich with puns and polarities.

Joan Jett Blakk (played by McCraney), as both herself and her own “Clark Kent,” Terence Alan Smith, is running her first presidential campaign, backed by Queer Nation. The play starts at her campaign announcement and ends right now. What happens in between is a drag show, a party, a political campaign, vaudeville, theater and an intimate portrait of a person trying to do right as they understand what their role is and what it will mean to achieve that. In 1992, when Marsha P. Johnson’s body was found on the shores of the Hudson, Blakk was just beginning her campaign. Less than halfway through 2019, at least seven trans women of color have already been murdered.

“Ms. Blakk” explores a narrative that isn’t trapped by literalism, the heteronormative forms of Steppenwolf’s standard or the indecisiveness of experimental performance. Yet Landau and McCraney pull from all those places, blurring them with camp and surrealism to assert the potency of storytelling as remembrance. Supported by a girth of dramaturgy, on display in the lobby, “Ms. Blakk” understands that theater is not documentation, but cannot be honest without it; it straddles the uncomfortable liminal space between anachronism and historicism. It’s chaotic, but it communicates. And Blakk, at her best, inspires us to pull our best selves out.

All this intellect and entertainment wouldn’t work without a sincerely capable cast: Daniel Kyri, Molly Brennan (who should really be the only actor playing mustachioed cowboys these days), Sawyer Smith, Patrick Andrews, Jon Hudson Odom and McCraney himself, who ties the six together with an incredibly generous performance.

“Generous.” That’s a word I can return to repeatedly in describing this show. In being difficult to label, it becomes, holistically, a Queer Play, combining content and form into a magnificent aesthetic. Without ever making its humor mean, by never making an Us-or-Them situation and by holding firmly to its kindness, “Ms. Blakk” becomes a serious play and the most important type of theater: generous, pragmatic idealism. (Jay Van Ort)