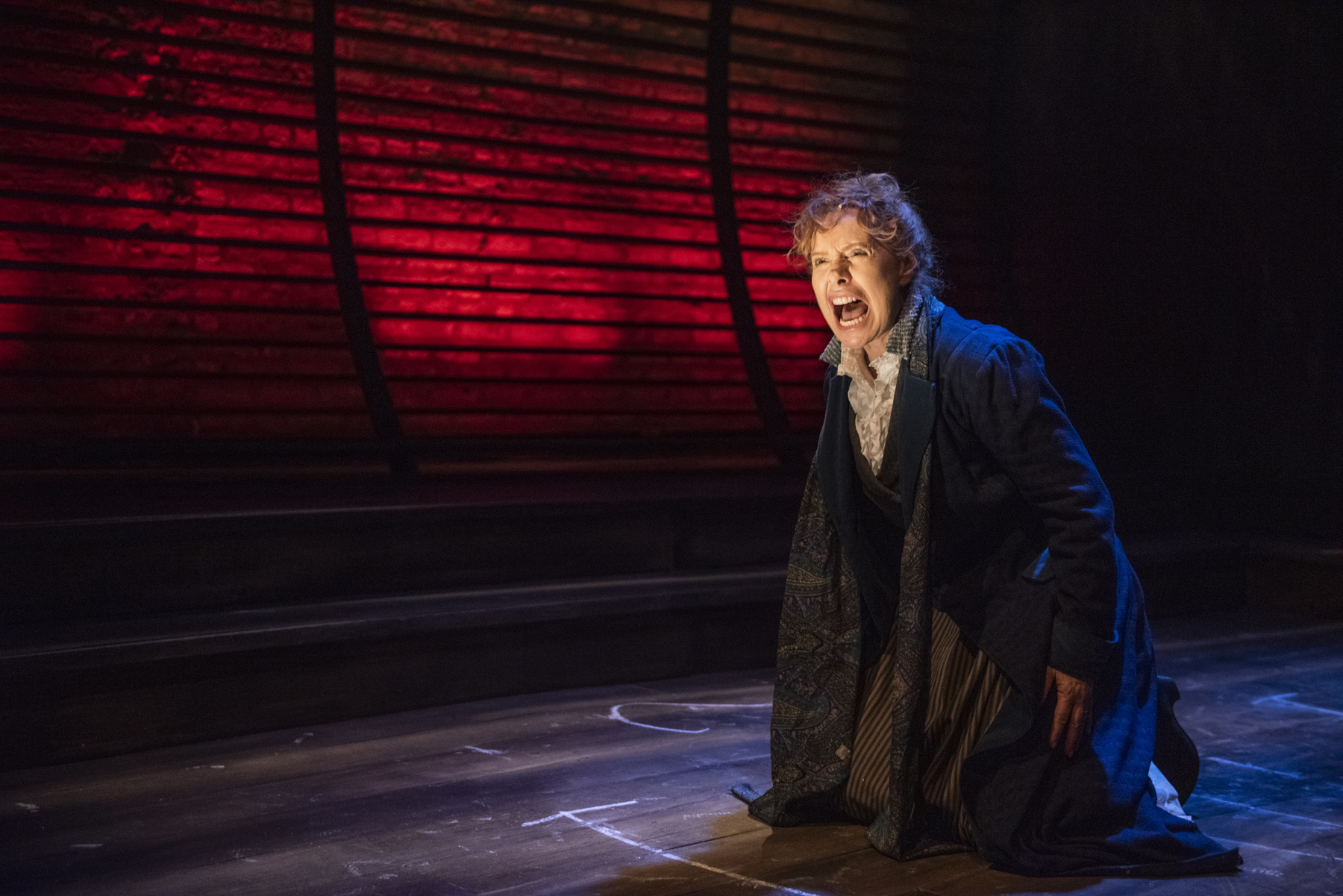 Less-than-talented Americans have always hungered for fame and fortune and have tried to achieve it through less-than-savory methods such as reality-TV appearances or “Jackass”-style stunts. This ignoble tradition reaches as far back as 1908, with the true story of aging, penniless Anna (Annie) Edson Taylor, who decides to take her last shot at greatness by becoming the first person to build a custom barrel and throw herself over Niagara Falls. And crucially: survive. Part shrewd business move, part possible suicide attempt, her audacious stunt is the subject of “Queen of the Mist.”

Equally audacious is the mission of Firebrand Theatre, the producing company. Dedicated to promoting feminist musicals, the group has staged a handful of dazzling productions in their short existence, garnering a reputation as a company to watch. Alas, even the best theaters come across a bump in the road. For Firebrand, the Chicago premiere of “Queen of the Mist” is that bump.

Barbara E. Robertson plays the headstrong, reckless and flighty hustler Annie, jumping from job to job and city to city before the locals catch on to her game. Her luck runs out and she’s scraping the bottom of her barrel for money-making ideas. She meets a kindred spirit in huckster Frank Russell (played by the charming Max J. Cervantes) and together they craft the plan for her daredevil stunt.

Sounds like a high-energy, thrilling, bad-ass feminist story, right? Wrong. Unfortunately, the music by Michael John LaChiusa seems to be almost entirely written in a maudlin minor key, demanding that the audience feel very sad each step of the way. The blue lighting and mist (provided by a smoke machine that works overtime) cultivates a thick and heavy mood. The actors enter at the top of the show singing in operatic voices with cloying melodies and harmonies, moving in somber, slow choreography that telegraphs “THIS IS GOING TO BE SAD, OKAY??”

Valiant attempts to channel vaudevillian charm are sapped of zing and jokes fall flat under the haze of this plodding story, and the tragic drone of the vocals and score. We never get to fully relish Annie’s recklessness, audacity and defiance in refusing to settle down, get married and have children, like most of the women of her day. We are robbed of the fun of watching a bad girl getting to be unapologetically bad. Robertson sings her face off, flinging bucketfuls of energy into the audience, imbuing Annie with the fire of a woman fighting for her life against that sad-sack mood that hangs on every scene as a weight around her neck. Her considerable talents cannot overcome the ever-present signal of the music, drowning out other emotions with the unyielding force of a rushing waterfall.

And perhaps that is the point that writer Michael John LaChiusa wanted to make: that Annie never had a chance at happiness. But that makes for a dreary two hours and ten minutes and proves that even a talented female director (Elizabeth Margolius) and music director (Charlotte Rivard-Hoster) cannot transcend a limited script written through the male gaze, which starts sad, ends sad and denies its lead character an arc. LaChiusa’s story distills the life of Annie Edson Taylor to a predictable morality play about a woman who made bad life choices and was severely punished for them.

The appeal of this story is the main event: Annie going over the falls. The fact that she had the wherewithal to design such a contraption is a fascinating aspect of her identity, which is sadly reduced to a cheap plot device. The slow first half of the play is mostly spent in anticipation of the big moment. Yet when it finally arrives, it is underwhelming. The second half, while far more interesting, is basically a series of punishments, problematically culminating in the implied ultimate punishment of dementia and regret.

I wonder how this story might have been handled by a female writer, someone capable of viewing it with mirth and joy, able to fully delight in the story of an older woman bucking the system and skidding into the end of her life with zero fucks given. The talented cast is full of spunk, energy and vocal talent. Yet they are drowned by a mediocre script and waterlogged score. This is a story that begs to be loved and remembered. Still, “Queen of the Mist” is a miss. (Sheri Flanders)