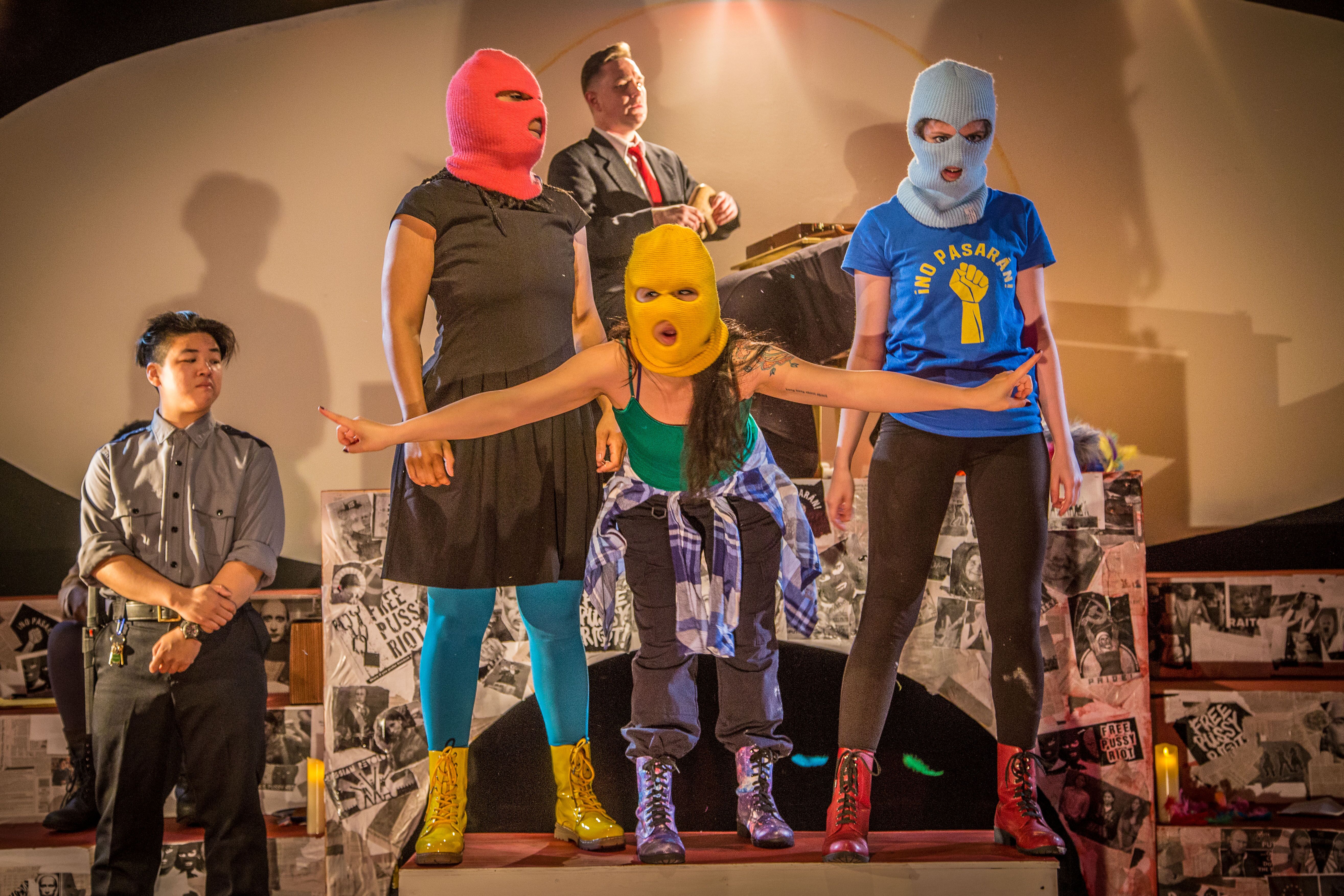 After what feels like an eternity as a freelance theater critic (actually just under four years), the productions that catch my attention these days tend to be those that connect most strongly with my interests outside of theater. Another living-room revival at the Theater of White Misery? Pass! But show me a play about basketball (or, if you’re Steppenwolf’s upcoming season, two plays about basketball), well, now we’re talking. Same goes for plays with music that are not musicals. Case in point: I loved Haven Theatre’s 2017 production of “We’re Gonna Die” (and its ensuing remounts) so much that I forsook my responsibility to review it, aka the “I love you so much we have to break up” of theater criticism.

I never said this approach was without flaws.

So it was with some anticipation that I arrived at Red Tape’s production of “We Are Pussy Riot (or) Everything is P.R.” by Barbara Hammond. I first heard about the Russian feminist punks back in 2012 through various music blogs and websites. At that time, I didn’t fully understand the circumstance surrounding their arrest, although I could tell from the swiftness and severity of the punishment they endured that what they had done (a less-than-one-minute protest of Russia’s recent elections at the Church of Christ the Savior in Moscow) must have been deeply upsetting to then-and-current president Vladimir Putin.

Because of where I was receiving my news from, I thought Pussy Riot was a band, despite the fact that their music was rarely even mentioned in the ensuing media blitzkrieg. Hammond’s play corrects this notion, repeatedly, through its assertion that Pussy Riot is not a band or even a group but an idea. And like so many ideas, Pussy Riot means a lot of different things to a lot of different people (perhaps none more so than Hammond), many of whom are featured in this play, which is collaged together from transcripts, interviews and statements, both public and private. So much is continually added to it that “Pussy Riot” eventually becomes inflated and distorted to the point of being unwieldy and illegible.

If you’re a person who starts at the fundamental questions of “Why this play?” and “Why now?” you’ll find that the parallels between this play’s setting (Russia, 2012, Vladimir Putin) and our own socio-political circumstance (the United States, now, our very own Putinesque president) are, like the dangers posed to our democracy through Trump’s mixture of bigotry, greed and sheer incompetence, clear and present. In the immediate wake of state-sanctioned abortion bans designed to challenge Roe v. Wade at the Supreme Court, a critical look at a test case for what happens when patriarchy and religious zealotry meet autocracy and internalized misogyny is welcome and warranted. And if “We Are Pussy Riot” had been able to retain its focus on this or any subject, there might have been lessons to be gleaned from it. Instead, the play throws so much spaghetti at the wall that the noodles themselves become the wall. Director Kate Hendrickson honors Hammond’s exuberance for her subject with a litany of sensorial stimuli from meta-theatrics and shadow puppetry to musical numbers and choreography too complex for the twelve-person cast to effectively perform in The Ready’s relatively limited confines. There is much simultaneous yelling, which is perhaps the most telling of the contemporary connections.

The double entendre of the play’s title is explored only in limited doses. Beyond a guest appearance by Madonna (Nora King’s impressions make up the production’s biggest and best laughs), the notion of publicity and its relationship to sincerity is generally thwarted by math: too little time divided by too many people. The characters are treated as public personas or caricatures, which creates a distancing effective suitable for a subtextual analysis on the interrelation of protest and performance, but also kept me from becoming more deeply invested in the women at the focal point of this story. The play also has a troubling (or perhaps slyly paternalistic…?) habit of instructing us about what we’re seeing while either being willfully self-deceiving (we are told several times that what we are watching is not a play, which is patently false) or opaque (why is the puppet show conducted with cleaning products?) or both. Again, it is hard to see the wall for the proverbial pasta. While picking any individual fibrous strand may prove temporarily nourishing, the intellectual labor required to make it a meal is not sustainable. This play, and Red Tape’s production of it, washes over you and then is done. It is art as experience and, at times, seemingly for its own sake.

There is a lot of potential in “We Are Pussy Riot,” just as there is in the idea that inspired it. Maybe somewhere in this play’s unique cacophony is a root tone upon which a chord of discord could be effectively built. Then again, the core, unifying idea of Pussy Riot seems to be more like an ax: it is most effective when ground until razor sharp and wielded with ruthless precision. So often, though, it is treated more like dull heavy metal on a stick, swung with impatience to exhaustion. The fact that this play is built upon the group’s own words is treated as a virtue. But people are not ideas. We are sentient meat slankets ruled by sloppy thoughts. As it is, the play doesn’t successfully honor either the humanity of these women or the potential for rigorous exactitude that their ideology represents. While clearly ambitious and enthusiastically executed, “Pussy Riot” is also middling and fallible and reminds us that we, too, are middling and fallible. I only wish I found that sort of thing more comforting.

Nevertheless, the ideas here are undeniably salient. In our city and beyond, we are content to offer citizens their First Amendment rights as long as they don’t inconvenience our access to entertainment. And while online signal-boosting is an increasingly legitimate and essential part of the justice process (just ask Pussy Riot…), our identities are siphoned off in the process and marketed back to us in the form of rainbow backdrops on corporate logos meant, at least in part, to assuage any potentially discomforting feelings around supporting the kinds of labor practices that actively contribute to income inequality, a disenfranchised and perpetually exhausted workforce, employment discrimination, the gender pay gap, and more. Is protest even protest if it is practiced only by permission of power? Does “legitimate” dissent even exist in an era of late capitalism where every gesture is tainted by an ingrained consumerist impulse? Is it possible that we are too busy fighting or indulging the baser angels of our nature, at the insistent behest of the self-care industrial complex, to even acknowledge, never mind effectively comprehend, our own complicity? To paraphrase Audre Lorde, there is no way to dismantle a house that will appeal to the people living in it. And we are all living, to one degree or another, in this house.

Just as there is no “correct” way to protest, there is also no “right” way to make theater. While this art form can be occasionally disagreeable or even offensive, “We Are Pussy Riot,” for better and worse, is neither. At the end of the day, this play needs what a lot of promising ideas need: a good editor. And though I did not find this particular production compelling, I respect Red Tape’s intentions in reaching outside of Chicago’s “traditional” and often limited approaches to drama. The show’s casting (by Catherine Miller) reflects practices that more theaters in town need to be taking note of. Above all, the company’s emphasis on accessibility (both physical and financial) is laudable. “We Are Pussy Riot” will cost you nothing but your time (and maybe round-trip CTA fare) and, this essay being just one person’s ad nauseam opinion, there is always a chance you’ll find something here that I didn’t.

But in case you decide to sit this one out, don’t worry: history has a history of repeating itself. (Kevin Greene)