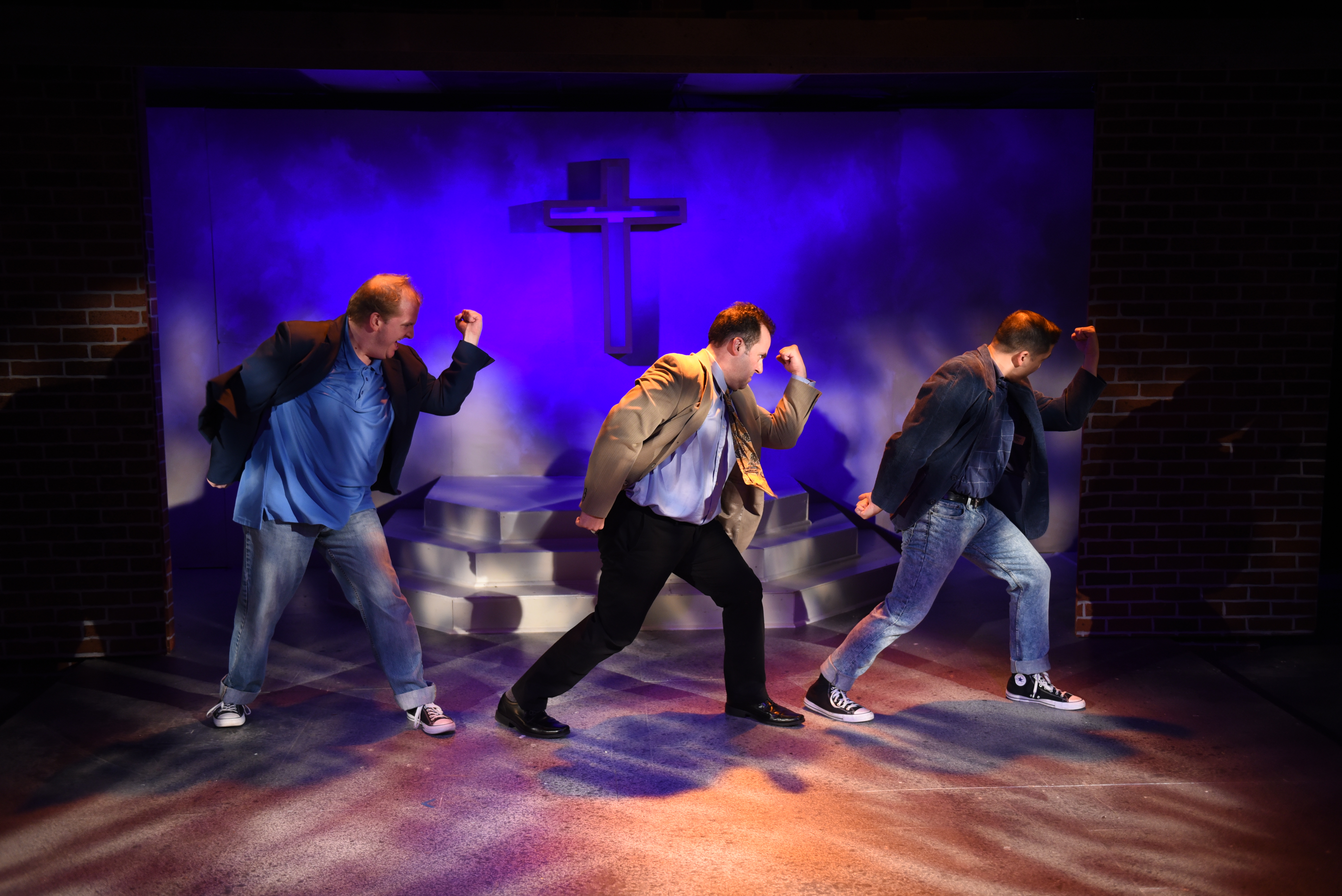 “Prophet$” is a good-natured muddle of a show that can’t quite decide what it is or what it believes. Playwright-actor Anthony Tournis and director Wm. Bullion stir together elements of melodrama, musical and sketch comedy in this gonzo depiction of grasping, conniving televangelists circa 1988, and their earnest, simple-minded followers. The result is an intermittently entertaining but not fully blended mixture of crude humor (Factory Theater’s stock-in-trade) and real feeling.

Vic (played by Tournis) is one of a trio of low-level hustlers eking out a living selling pornographic videotapes to sweaty teenagers. The history of their relationship—boyhood friends? college roommates? former cellmates?—is never explained in this loosely knit narrative. The three colleagues-in-sleaze—ringleader Vic, reluctant sidekick Seth (Eric Wang) and alcoholic hanger-on Owen (Eric Roach)—are down to their last nickel when they see on TV a religious huckster of the Jim Bakker or Jimmy Swaggart variety soliciting contributions from his virtual flock. The proverbial lightbulb goes off, and a besuited Vic is soon in business, preachin’ and prayin’ up a storm while raking in the bucks from a growing audience of religious consumers who find transcendence in his tawdry faith-healing act and sincerity in his slick, showbiz persona.

Assorted hijinks ensue, including the intrusion of Darla (Ashley Yates), a hard-bargaining con artist who muscles her way into the stag setup, pretending to be Vic’s Tammy Faye Bakker-like wife, all big hair and corn-syrup smile. The plot thickens with the introduction of Agnes (Lorraine Freund), an older, good-hearted woman who desperately needs the love and care that Vic pretends to offer, and Leslie Goode (Timothy C. Amos), the villainous local megachurch minister with antifreeze in his veins who brooks no competition on his turf. The two go at each other like rival drug lords, and violence is in the air. There are hints of Trumpian bombast, idiocy and viciousness in the ranting performances of the two electronic preachers, both of whom are masters of the original and still most crass reality TV format. Still, more could be done to connect these Reagan-era reprobates to the camera-loving con artist currently residing in the White House, who also feeds off the misery and misplaced anger of his followers.

Not every actor here sparkles—Wang in particular is miscast in a thankless, wet-blanket role—but Tournis shows some depth in his duplicity as the crooked but not utterly heartless Vic. Amos is elegantly evil as his hypocritical foe, and Freund puts a little extra into her performance as Vic’s biggest fan, who refuses to acknowledge her hero’s fraudulence, declaring, “You make me happy—you can’t fake that.” Roach is joyfully bouncy and goofy in the play’s two musical numbers, the highlight of the evening.

Raising the question: Why isn’t “Prophet$” a full-fledged musical? It seems headed in that direction but never arrives. Instead, we get a show that’s too sweet and affectionate toward its bottom-feeding characters to be biting satire and too broad to be compelling drama. The frat-boy-gone-bad feel of the protagonists doesn’t mesh with the darker, deeper themes here of corruption and betrayal, and the script’s barrage of f-bombs doesn’t help, numbing the audience’s ear and choking off any more creative or sophisticated use of language. In the end, the tricksters head off into the sunset, seeking new rackets and fresh victims, leaving us wondering what, if anything, the moral of this story might be.

Karl Marx memorably termed religion the “sigh of the oppressed creature, the heart of a heartless world.” The real-life operators who monetize this one refuge from a mercenary value system are doing more than fleecing the credulous and vulnerable. They’re showing that nothing is sacred in our society and literally everything is for sale. And there’s really nothing funny about that. (Hugh Iglarsh)