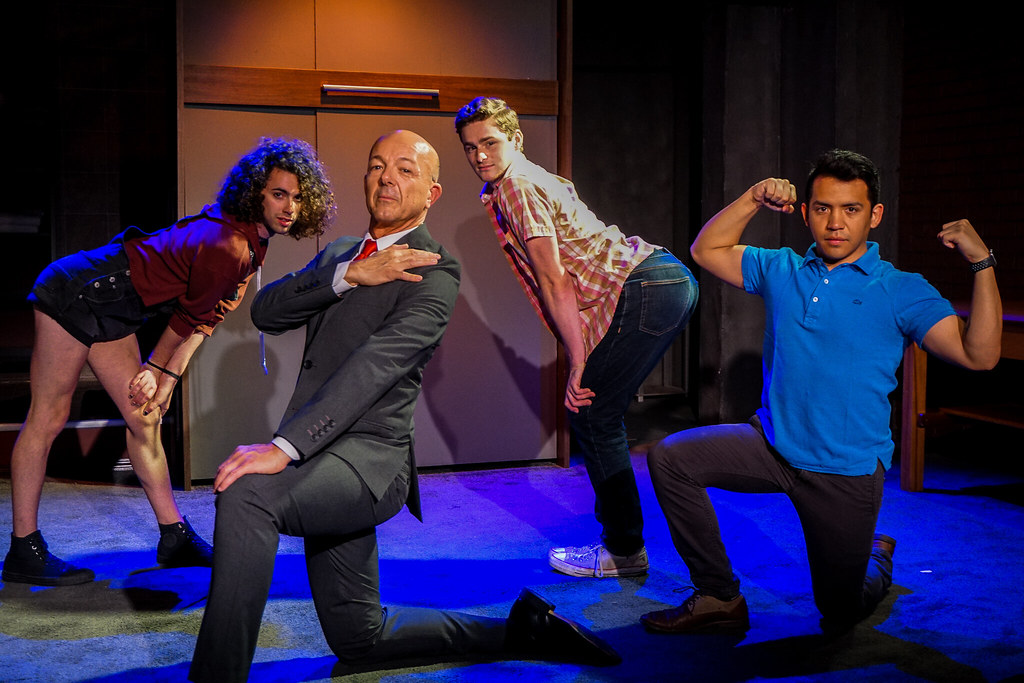 We presume that gay men still meet each other in bars, however accidentally. But as is true for all sectors of society possessed of means and minimal typing skills, the internet has changed the face of Getting To Know You forever. The appropriately named app Grindr and its fellows allow today’s way-gay and Thursday-gay clickers an opportunity to post pictures of themselves (or an airbrushed model), a profile-cum-advertisement focusing on the type of release they are seeking, and the location where their lover du jour can get them a piece of that. Like any other app, the game is what you make it. We may presume that men meet using Grindr and two months later pick out china patterns. But probably not, mostly.

Specializing in rainbow send-ups of fairytales of all stripes, Erik Ransom (book, music and lyrics) has gotten lots of attention on the new-musical theater scene since his first fully produced piece mounted the boards in 2011. Ransom is an actor who has expressed his happy surprise that the part of him he thought he would need to hide to have a career in the performing arts would be the sensibility that would help him to succeed, while leaving the world a gayer place. “Grindr” explores themes of love and lust and the ways in which men can mix them in unsuccessful proportion when their initial connection is finger-to-finger rather than face-to-face. The music ranges from rock operetta to pop rock, with a story that sits on the fence between camp and cautionary tale. Director John Cardone helps his cast negotiate the sometimes-abrupt shifts in thematic focus, and choreographer and costumer Shawn Quinlan keeps them gyrating and half-naked.

Ben Broughton and Justin Cavazos give warm and winning performances as a Grindr-made couple pursuing an exclusive relationship built on heteronormative modeling. Evan Wilhelm plays a rock-music-howling twink hoping to find fulfillment by keeping his orifices unprotected and dripping. Director Cardone does double duty as a Thursday-gay Daddy with a sadistic streak.

In the titular role of the manipulative, she/he-siren, actor and countertenor Bruno Rivera’s sparkling, supple vocals bring the opera to the party. Rivera’s three-day stubble, lovely legs and multiple octaves steal hearts on both sides of the footlights.

With themes of bareback sex and ready consequences, this pretty pageant will sit differently with gay men of varied ages. Those who survived the first wave of AIDS may find it disquieting at times. Having been born into a world where chemical combinations can assist those who want their sexual birthright-cake for the eating in having a long life while living at a time when the preventative formula of PrEP allows for safer, cross-pollinated sex between HIV-negative and -positive partners, a younger audience may be able to bop to Ransom’s sexy, allegorical beat with greater ease. It doesn’t matter that one generation may see a different play than another. Time to get your gay on and ogle the pretty singers! (Aaron Hunt)