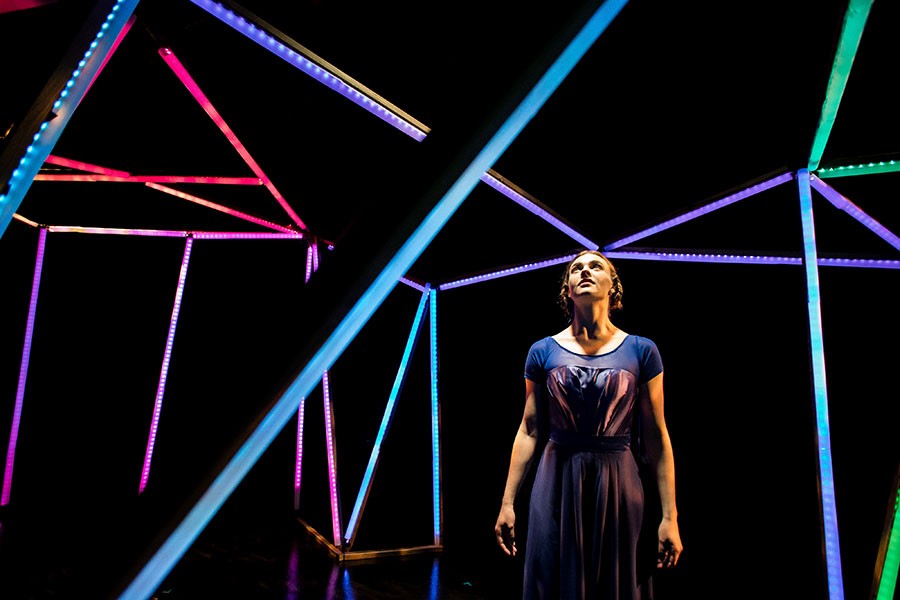 “Ada and the Engine” attempts to do several impossible things at once and fails elegantly and enthusiastically at all of them. Lauren Gunderson’s 2015 play is an attempt to dramatize an undramatic life, to make technology sexier than it is, and to treat art and science (and maybe religion) not as differing and conflicting perspectives on reality but rather as aspects of the same sappy cosmic melodrama. The artistically ambitious and imaginative Artistic Home troupe puts in more effort than this talky, meandering work deserves, but in the end this is one engine that just cannot.

The Ada in question is the real-life Ada Byron Lovelace, product of the misalliance between the brilliant but wicked Romantic poet Lord Byron and the conventional Lady Anabella, who tells her daughter: “Your father poisoned every pond he passed.” The domineering Anabella, concerned by the fact that Ada has more than a touch of her dad’s fiery, headstrong temperament, steers her into marriage to the decent and respectable, if stodgy, Lord Lovelace. But in the meantime, Ada, a mathematical prodigy, has formed an intellectual bond with Charles Babbage, an inventor and visionary seeking to build the world’s first mechanical computer, the “difference engine” of the play’s title. Burdened by ill health and benighted Victorian concepts of woman- and motherhood, Ada in her short and busy life nevertheless managed to articulate the basic laws of cybernetics and create the world’s first computer program. She was of her time and ahead of it: a working model of Babbage’s steam-powered analytical machine was finally built in 1991 by the London Science Museum, validating the pair’s work 139 years after Ada’s death.

With its marriage-driven plot mechanics and lengthy technical asides, “Ada and the Engine” comes off as the awkward love child of Jane Austen and Bill Nye. the Science Guy. One of course sympathizes with Ada’s powerful desire to be taken seriously as a scientist at a time when women were unwelcome in that world. But a life given over to algorithms and polynomials is not necessarily one that will thrill theatergoers. Storywise, the most exciting thing that poor Ada Lovelace ever did was to die young, and so the second act is basically one drawn-out, Camille-like death scene. This segues into an afterlife encounter with the father who abandoned her in a heaven that is somehow also the glowing inner workings of Babbage’s device and the future digitized and networked world we inhabit, here depicted as a paradise of disembodied intellect and sanitized memories, free of the living world’s pain.

“Machines cannot better us. Machines cannot love,” protests the virtual Lord Byron (played by John LaFlamboy). Indeed, Ada’s vision of the future, with its machine-made art and human-replacing automation, has a pitch-black underside, at least in light of our own anxieties about artificial intelligence. But her father’s objections are swept aside in a play that ends up sentimentalizing technology and seeing only good things in a future dominated and defined by Babbage’s “thinking loom with a heart like a train.”

Brookelyn Hébert plays amped-up Ada, her every gesture strained and histrionic. In a play that could use a steady hand on the tiller, director Monica Payne keeps raising the show’s emotional level, until Hébert and John Mossman, as the sulky, ever-aggrieved Babbage, egg each other on to chronic hysteria. The main characters—including Ada’s husband (Rich Holton) and mother (Carolyn Kruse)—register more as plot devices than real people. Babbage’s friend Mary Somerville (Laura Coleman) has no purpose and almost no personality, indicating just how thin and first-draft the writing and storytelling are. Things are not improved by the cast’s uneven accents and the show’s plastic tubular set, perhaps a nod to the innovative iron-and-glass Crystal Palace erected in London toward the end of Ada’s life as a monument to science and progress. But this glow-in-the-dark stage structure is less inspiring than confining and distracting.

“Tonight we prove our poise,” says Anabella to her rebellious Ada before an important matchmaking ball. But poise is just what this breathy, twitchy, overheated show lacks. There’s a good play to be written about the birth of the computer age, that late byproduct of the Industrial Revolution and the era’s obsession with speed, power and control. “Ada and the Engine,” which has little movement, energy or driving purpose, is not it. (Hugh Iglarsh)