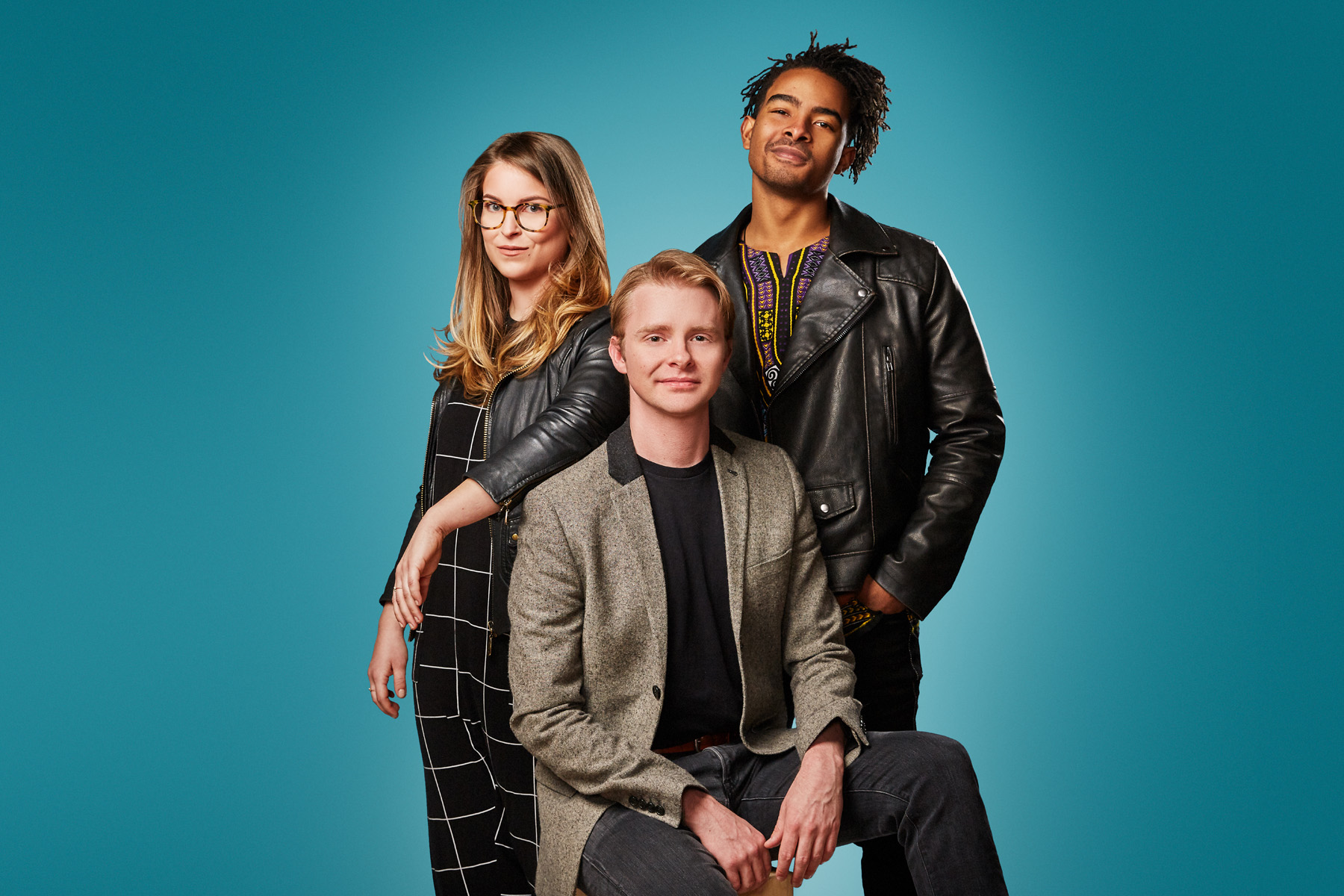 “Have we talked about the Vegas Line?”

We had yet to talk about the “Vegas Line.” But about forty-five minutes into my hour-plus conversation with Andrew Cutler, Amanda Fink and Eric Gerard, the new owners of Black Box Acting, I was enthralled to be given a few pointers on terminology used by the teachers and students of the now-decade-old training institution for Chicago’s acting community.

Amanda points behind me to the spike tape crossing the width of the studio we’re set up in, asking me to imagine that the line of tape is literally “the Vegas line,” continuing to fill me in on a Black Box term derived from that most famous of phrases, “What happens in Vegas, stays in Vegas.”

“That’s the first thing we say on the first day of class, so that you are free to do the work you need to do. It’s a place where you are empowered to speak to [everything] that you need, but that you also can get out of your comfort zone, and should, and can, because you owe that to the people who get to watch you live with no consequences.”

This phrase, alongside the majority of Black Box’s methodology and curriculum, stems from co-founders Audrey Francis and Laura Hooper, who, back in 2009, founded Black Box Acting to make space for actors to “Work Hard and Be Fearless.” Operating out of their own studio space on North Avenue since 2013, Black Box developed a unique training method designed to provide actors with a process to ground their work and to teach themselves that most essential of mantras: “You Are Enough.”

This process is what brought Cutler, Fink and Gerard back again and again in the early days of the Studio, back when classes operated out of the Den Theatre. After rising through the ranks of the Academy and becoming teachers at the studio in December of 2018, Francis and Cooper offered them the chance to take ownership of their artistic home. It was a no-brainer for the team. Fink succinctly sums up why Black Box means so much to her: “The fact that we start with this core principle that you are enough, and that guides everything we do, and that you have a responsibility as the teacher in the room to uphold that and to live that and to show that that can really resonate in you and affect the way you live your life, not just who you are on stage, is a massive responsibility, but also the most worthwhile one.”

Between the three, their specific tasks and responsibilities have been laid out perfectly: Cutler handles financials and day-to-day operations of the space; Fink handles all marketing and student-facing materials; Gerard works with teachers and the specific curriculum that goes into the Black Box Method.

Black Box Acting is split up into two specific levels of programming: the Studio, a five-week program where you learn the basic tenets of the Black Box Method, and the Academy, a five-month intensive based around honing the method and applying it throughout multiple performance mediums (theater, television, film). The method itself is a combination of Meisner, Viewpoints and some extra magic Francis and Hooper cooked up in the early days of the program.

For this team, the method has been imperative to crafting their specific performances over the last decade. Cutler has applied the method of scene analysis developed at Black Box to every single scene he’s worked on for the past eight years. “It’s what grounds me when I’m nervous. I have a whole codified methodology that I can go back to and say ‘Okay, I can adjust this.’ It makes taking notes exciting.” Fink agrees, noting the long-lasting effects the training has had on her career. “You will leave with something you can apply to an audition tomorrow. You will feel invincible.”

One of the newest additions to the programming came from Gerard. As one of the first instructors of color at Black Box, Gerard knew about the gift of vulnerability that had been granted to him through working with the studio, but was hyper-aware of the unintentional marginalization of people of color that a majority-white-led, high-priced acting studio was creating. Gerard says that upon taking over ownership of the company, “One of the most important things to me was sharing that same gift with people that looked like me. Having the opportunity to give a group of people of color the gift of understanding that you are enough.”

Thus, “Melanin & Meisner” was created, labeled as an introduction to the Black Box Method, specifically geared at fostering “an experience of bravery in the classroom in which artists of color can see themselves reflected in their ensemble.” Gerard was definitely concerned that, at face value, the Method would be construed as “some white-people shit,” but the reaction from the first session of attendees proved him wrong in the best way possible.

After this session, one lesson Gerard took from the experience harkened back to that guiding principle of working to be enough. “We’re all just looking for home. Whether that’s feeling heard or seen, we all just want to matter to somebody. There’s a reason that you exist, and to be able to see that reflected back in my community meant more than anything.” Gerard and his team agree that “Melanin & Meisner” will continue to be offered through Black Box as a doorway to the rest of the training offered, opening up a path to a community that has been neglected or missing in the past.

The team as a whole know that it’s still early days, but the future holds many possibilities. “As we’re coming into our own as a team,” Cutler says, “we’re trying to honor the legacy of what Audrey and Laura built. But we’re also excited about continuing to experiment and push our curriculum and our teachers forward, serving them in a way that’s meeting them where they are.”

A few weeks after our interview, I saw Amanda Fink perform in First Floor Theater’s production of “I’m Gonna Pray For You So Hard.” Housed in the intimate 2B Theater on the second floor of the Den, “Pray For You” follows a late-night conversation between Ella, played by Fink, and her father, David, an acclaimed playwright whose relationship with Ella grows more twisted and dire as the hours (and drinks) go by.

David is Ella’s only onstage scene partner for the entire show, with Ella mostly silent for the first hour of the play. But behind Amanda’s eyes, you can see the wheels turning, the thoughts running through her head, the detailed machinations of what Ella, and Amanda, has brought into this scene and what she needs to get out of it.

With few words spoken, an entire process is laid bare onstage, thrillingly and daringly contained in a little black box.