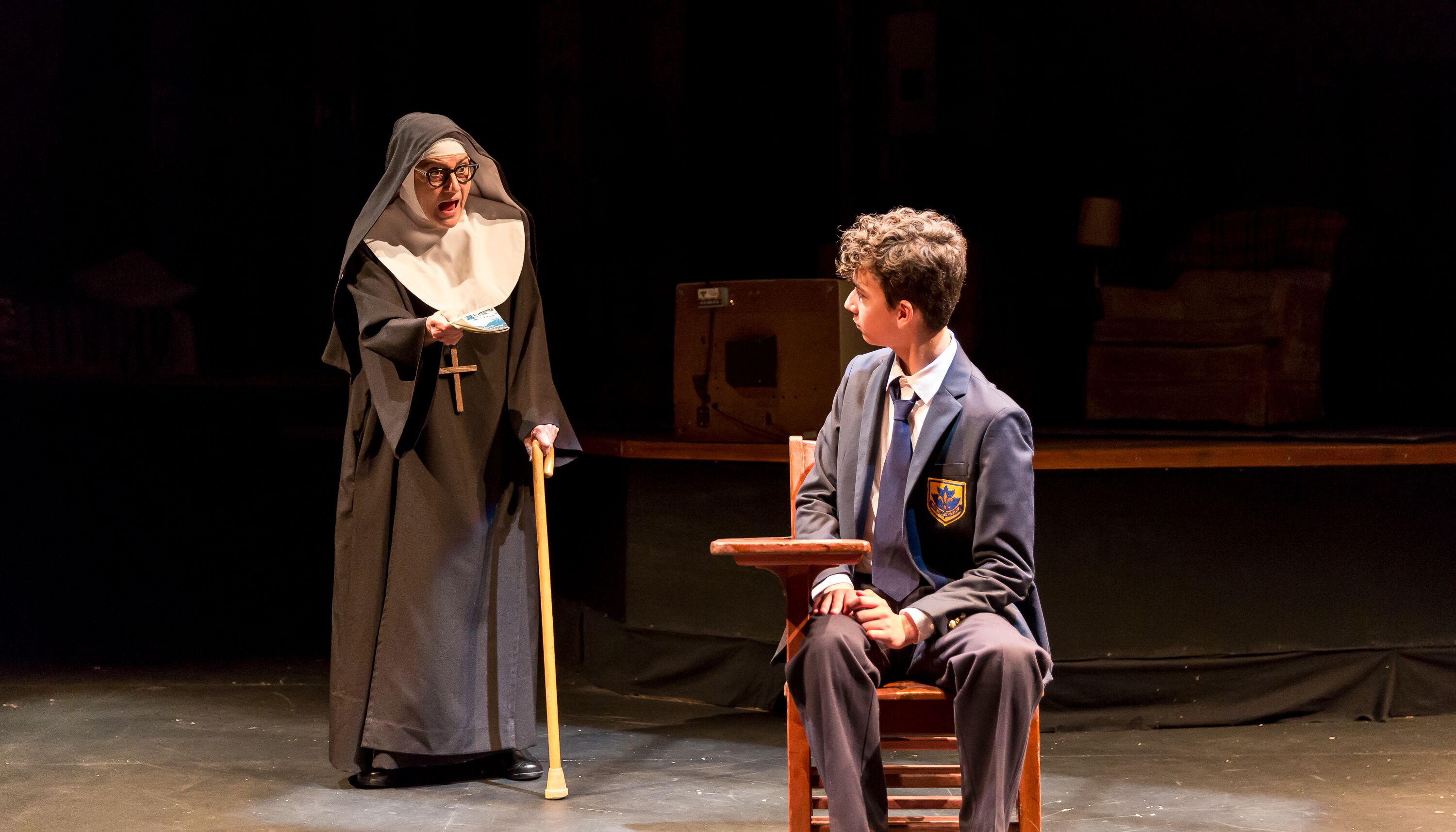 When my mother was young and would lose interest during long, mostly Latin masses she and her family would attend, she would stare at the colorful stained-glass windows around St. Patrick’s Church. While at Theatre at the Center for their production of “Over the Tavern,” I found myself more mesmerized by the scenic designs by Angela Weber Miller than by the show itself, with the exception of any scene featuring Janet Ulrich Brooks as Sister Clarissa. She is, without a doubt, the savior of this production.

Tom Dudzick’s semi-autobiographical play “Over the Tavern” (2006) is set in Buffalo, New York in 1959. The Pazinski family lives above Chet’s Bar & Grill owned by patriarch and namesake Chet. Twelve-year-old Rudy Pazinski (Logan Baffico) attends St. Casimir’s Parochial School and believes that God put us on Earth to have fun. Rudy, unsurprisingly, butts heads with Sister Clarissa on the subject of religion. Meanwhile, life above Chet’s tavern is tumultuous with four kids, one mother and a father who needs to keep his temper in check.

In many ways, Dudzick’s play reads as a sitcom of the fifties complete with groaning jokes about Catholicism and observations about life in mid-century America. The first act drags considerably and doesn’t find footing until the second when the seriocomedy turns serious. Because it feels so much like a sitcom, it’s hard not to wonder why the play runs two hours when it could easily fit into ninety minutes.

Theatre at the Center’s production is loosely directed. The acting styles of the teens especially don’t hold up as a cohesive unit. Moments of overacting that feel like a nod to “The Brady Bunch” don’t read as wholly intentional. At the same time, the family doesn’t feel genuine. Their chemistry is virtually nonexistent, unless Sister Clarissa is in the room. Uneven direction cuts this production off at the knees, making it difficult to lose yourself in the story.

For a show that lauds itself as being about the nun and the boy, there aren’t enough moments between them to fill that expectation. Nonetheless, Brooks is a godsend. Her wit and charisma transform the stage in each scene she graces. She ushers the family through more than one difficult moment, which heartens the spirit, especially for any audience member who has experienced the crack of a nun’s ruler against their hand.

Dudzick’s work belongs to a different era. “Over the Tavern” is like the Catholic Church’s penance for the abusive nonsense the nuns performed on their pupils. But, just like that bygone ruler practice, the story of the Pazinskis has overstayed the tavern’s closing time. (Amanda Finn)