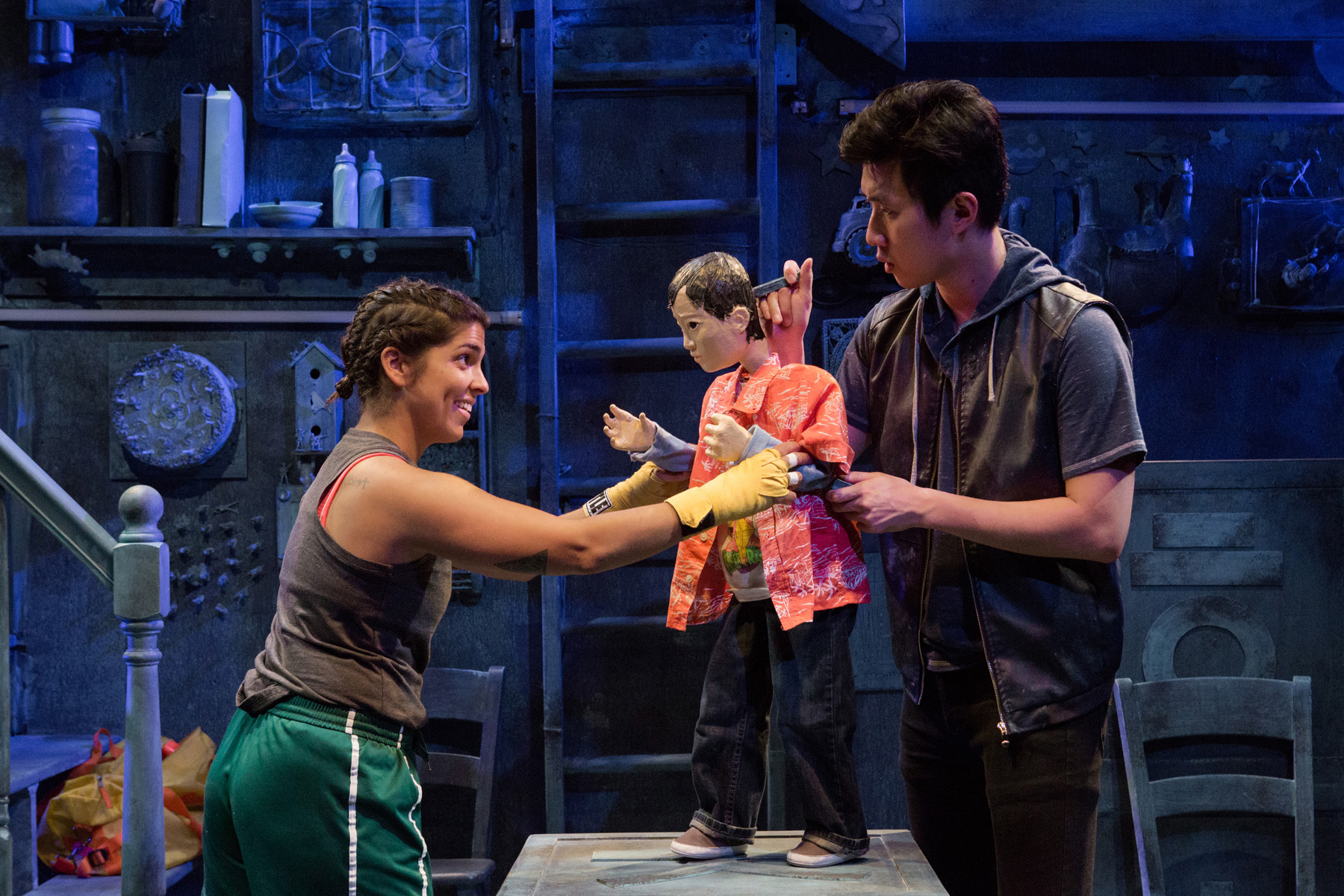 It’s Jeenu’s eyes that get you.

Jeenu, also known as Peter, Junior, also known as Wolf (because, of course, he is a wolf), brought to life by actor Dan Lin, is the small Korean puppet boy at the center of Hansol Jung’s “Wolf Play,” directed by Jess McLeod at The Gift Theatre. He is designed and constructed by Stephanie Diaz in such a masterful way as to appear meek, curious, angry, lonely and, yes, even wild (which, again, makes sense because Jeenu is a wolf). Lin’s heartfelt handling and the careful, considerate sculpture of Diaz’s puppet are enough to warm your heart through to the bitter end of Jung’s latest must-see theatrical venture.

Chicago has been lucky to bear witness to multiple plays from the fantastical mind of Hansol Jung: Sideshow Theatre Company’s “No More Sad Things” showed us the inevitable elasticity of heartbreak. “Cardboard Piano,” earlier this year at TimeLine Theatre Company, explored the painful limits of forgiveness. Now in its Chicago premiere, after a showcase at Victory Gardens’ Ignition Festival, Jung’s “Wolf Play” challenges the toxicity of masculine dominance in parenting and asks what it truly takes to raise a child. Especially a child who’s a wolf. Because, again, Jeenu is a wolf.

Jeenu (and by extension, Lin, a compassionate and humorful guide to this story) frequently shares this with us, alongside fun facts about wolves, throughout, providing the eight year-old Jeenu with a mysterious wolf-like consciousness that guides his inner life while his shy, childish exterior is all the outside world can see. This includes his newly bestowed parents Robin (the warm and wonderful Jennifer Glasse) and Ash (Isa Arciniegas, a heartfelt powerhouse), who have adopted Jeenu from Peter (a not-to-be-trusted Tim Martin) via shady dealings on the internet. Peter is out of the picture (so we’re led to believe), and Jeenu’s wolflike behavior can be tempered only by the understanding and patience of Ash, usually at the boxing club or at the breakfast table, in tender moments of human-puppet connection.

Jung is knocking on the door of some deep conversations about the role of masculinity in a child’s life, and it’s refreshing to watch a play dissect masculine and feminine energies between a queer couple rather than a heteronormative one. This all comes to the forefront when Robin’s brother Ryan (Al’Jaleel McGhee, hilariously frustrating) becomes convinced that it’s not enough to just have masculine energy: a boy needs a man as a parent. It’s this fundamental flaw in how to manage Jeenu’s energy that causes the story to capsize under its emotional weight.

Under McLeod’s precise, imaginative and warm direction, the entire cast and design team inhabit a truly magical, emotionally resonant framework within the confines of The Gift’s intimate space. You can sometimes feel the production bursting at the seams as it careens from scene to scene, making use of every nook and cranny, and every theatrical magic trick in its tool belt to keep us engaged. It all works and the intimacy helps to keep our attention, even if a few extra feet of space could help everyone breathe a little easier.

Peter constantly ascribes Jeenu’s violent outbursts to a classic case of “boys will be boys,” a violent adage that has existed for so long in our society that its definition has managed to wither into absolute meaninglessness. Boys will indeed be boys, but it’s up to us to show them how they can truly and openly exist in this world, alongside the glorious multitudes and possibilities of what a boy can actually be. Then again, in Jung’s eyes, boys can be wolves, too. (Ben Kaye)