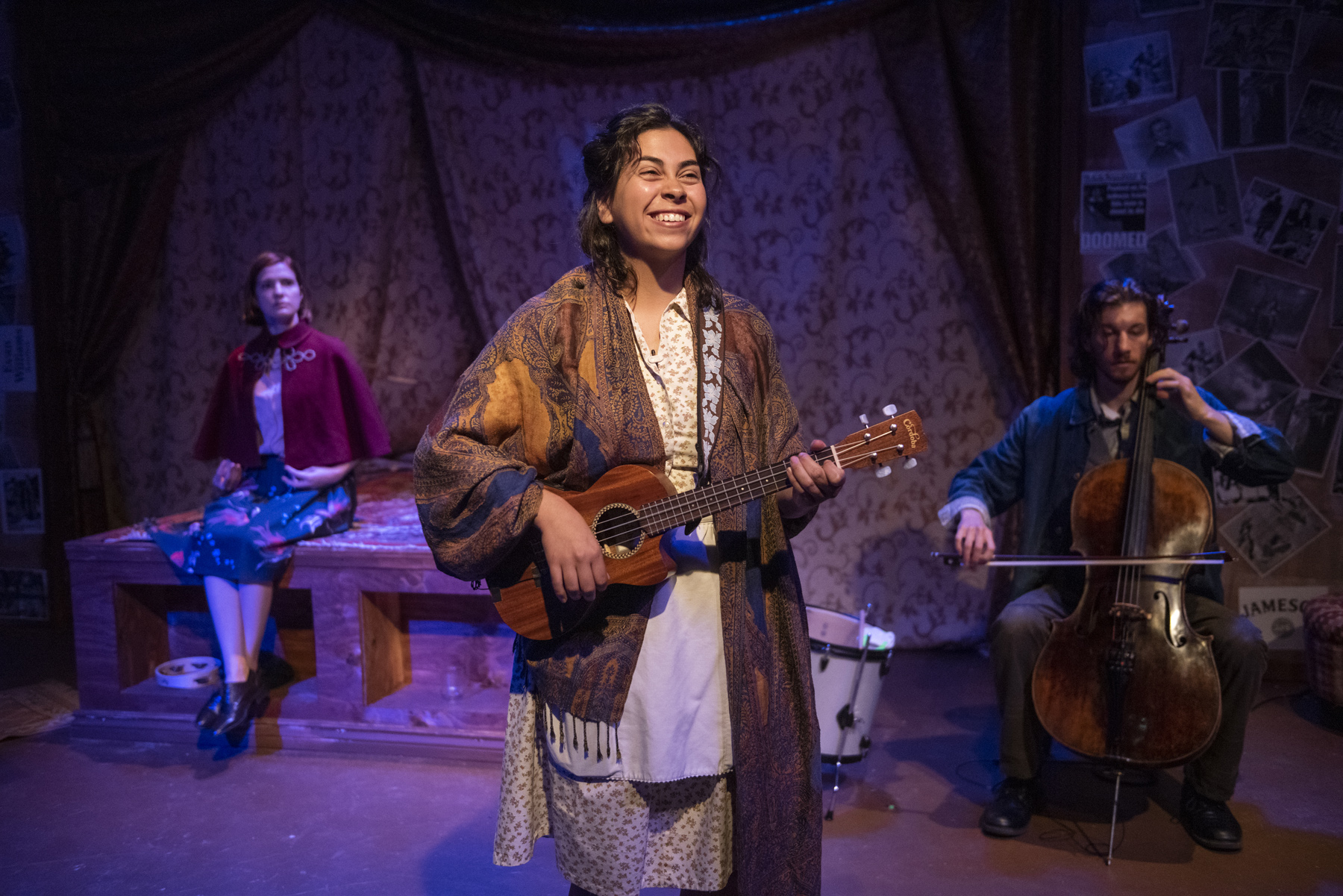 “Ghost Quartet” is described as a “staged concept album about love, death and whiskey” but it is so much more than that. (It also is exactly that.) It’s a show about a lot while also being about a little. It’s a smorgasbord of delectable melodies, familiar stories and eerie feelings. It’s about as sensible as a fiddle made from a breastbone and yet it holds the human heart just as snugly.

Dave Malloy, writer of “Natasha, Pierre & The Great Comet of 1812,” is a fan of theatrical works inspired by literature. In the case of “Ghost Quartet,” the 2014 amalgamation of stories from all over the world, he couldn’t pick just one. The quartet of storytellers immerse themselves in Scheherazade’s world, Poe’s “House of Usher,” “Grimms’ Fairy Tales” and even “The Wind and Rain,” a seventeenth-century murder ballad.

T.J. Anderson, Alex Ellsworth, Rachel Guth and Amanda Raquel Martinez delve into this multifaceted storytelling plane. The stories are told as though they were albums, divided into songs on separate sides and tracks. This side and track metaphor carries beautifully over to another tale that spans the majority of the show, about a woman who is killed after being pushed off a subway platform.

As if the storyline complexities weren’t enough, the show demands theatrically articulate and musically gifted performers who are not only strong singers but instrumentalists as well. Good thing Chicago is perfect for that kind of challenge. With voices like those of Martinez and Guth that shape-shift between country and opera with ease, “Ghost Quartet” has a safe resting place. And so long as Ellsworth and Anderson are there to charm us with their breadth of performance styles then all will be well entertained.

The trouble with “Ghost Quartet” is Malloy’s wide variety of inspirations. With so many stories, it gets tiring keeping track of who is who and what is what. This work could do with another round of edits. There isn’t a real reason that the show needs to be ninety minutes, it could have been much stronger if it was only an hour. By the time the cast gets done with “Side Three” the show feels naturally ended. As much as this cast’s rendition of “The Wind and Rain” has stuck with me (and made me long to return to Ireland), the show felt over long. This is not the fault of the production, it’s a natural dip created by Malloy. Songs like “Hero,” “Midnight,” and “Monk” just don’t have the same kind of theatricality that “Four Friends,” “The Astronomer” and “The Telescope” do. Though eight-bit projections by G. “Max” Maxin IV of a bear wearing sunglasses or a subway train leaving a snail trail behind could put a smile on even the stingiest critic’s face.

Sometimes the show makes absolutely no sense. And, honestly, that’s okay. It’s worth the slower moments to hear this multitalented quartet play their hearts out. I envy the giant bear on stage who gets to see them sing night after night. (Amanda Finn)