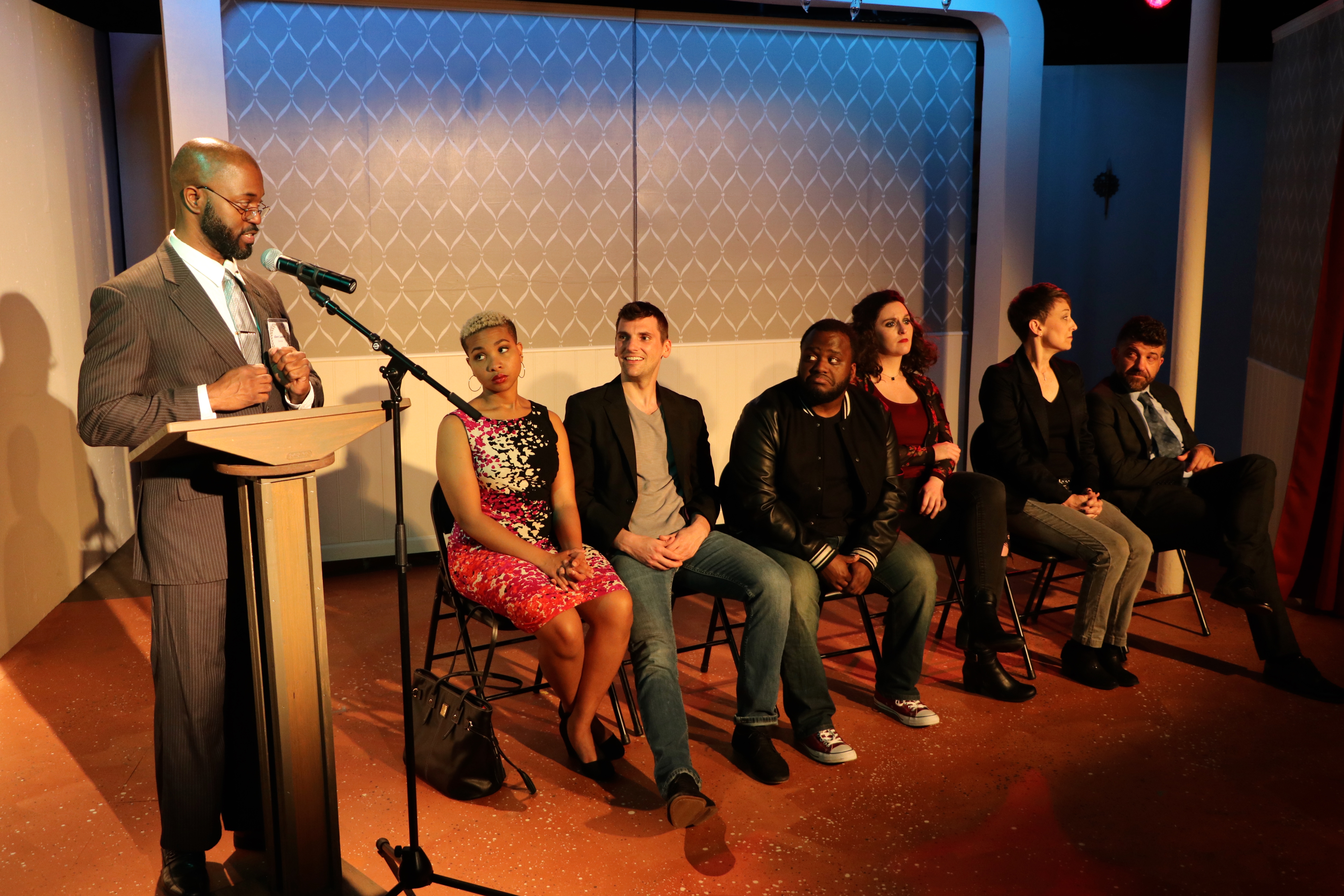 “Roast” has an offbeat setup—as a last request, a young comedian who has killed himself asks that his funeral take the form of a live-streamed comic roast of himself—but this morbid tragicomedy lacks a punchline. Playwright Harry Wood’s story of a tragically truncated and less-than-successful life in showbiz is itself a dramatic non-starter, failing to provide satisfying answers to its animating questions or delve beneath the scenario’s surface.

It begins promisingly enough, at the funeral home—excuse me, “Bereavement Palace”—of Albert Lassiter (Roy Pugh), the priggish undertaker who acts as the roast’s emcee. Pugh is pompous perfection as he tries to inject a note of decorum into the proceedings while at the same time relishing the opportunity to hog the stage and tell his eye-rollingly awful jokes, which are tasteless by any standard, even that of a televised post-suicide insult fest.

Unfortunately, Sam’s six mourners stray from Pugh’s broadly satirical tone, settling for an unsteady earnestness that seesaws between cruelty and sentimentality. Sam’s buddy Keith (Reginald Hemphill), confidante Sharon (Alison Plott), mentor Beth (Kelli Walker) and snarky rival Sonny (Mike Newquist)—all from the standup world—as well as his smolderingly angry sister Alyssa (Kyra Jones) and guilt-stricken father Edward (John Miraglia) perform at Sam’s grim final showcase. The grieving comedians are uniformly unfunny, which isn’t surprising considering the situation, but neither are they particularly moving or insightful. We learn what we already know: that suicide is painful for survivors, that childhood scars linger, that performers are often fragile and insecure. What we don’t learn is who Sam is underneath the jokes and bravado and self-sabotage, or why he swallowed the pills when he did, or why he wanted this odd and conspicuously undignified send-off.

We never even discover why the roast of the apparently Jewish Sam is taking place at an African-American funeral home. Maybe we’re supposed to assume, based on his photo, that Sam is biracial, but the script doesn’t touch upon his apparently complex identity. This lapse points to a larger problem in the play: that it gives no sense of a larger world beyond the characters’ pat individual dramas or of a pattern or meaning in Sam’s life and death. Which is to say that “Roast” has neither a where nor a what nor a why.

Director Derek Bertelsen keeps the jokes and anecdotes moving, but the show’s staggered structure, where stand-up routines alternate with flashbacks to the roast’s warm-up, is problematic. It’s a format that could work on TV, but onstage, the many pauses, as the cast furls and unfurls Sydney Achler’s clever folding set, become tedious and impede the flow. The cast members are engaged and energetic, showing traces of vulnerability under the verbal aggression that is stand-up. However, in a play that’s neither really playful nor serious, the acting tends toward the inflated and histrionic. This is especially true of Jones’ Alyssa, whose accusatory rage at her and Sam’s admittedly neglectful father takes on a deadening stridency.

Playwright Wood, who graduated from Northwestern in 2017, is still learning the craft. One hopes he will develop beyond the finger-wagging and guilt-tripping toward something richer and bigger. There are hints of thematic sophistication in the play, as it presents a world that turns literally every aspect of life into ratings-craving spectacle. In the end, though, “Roast” never gets inside Sam’s funny-guy persona, and his ending seems not so much a moment of truth as a final sad bid for attention. (Hugh Iglarsh)