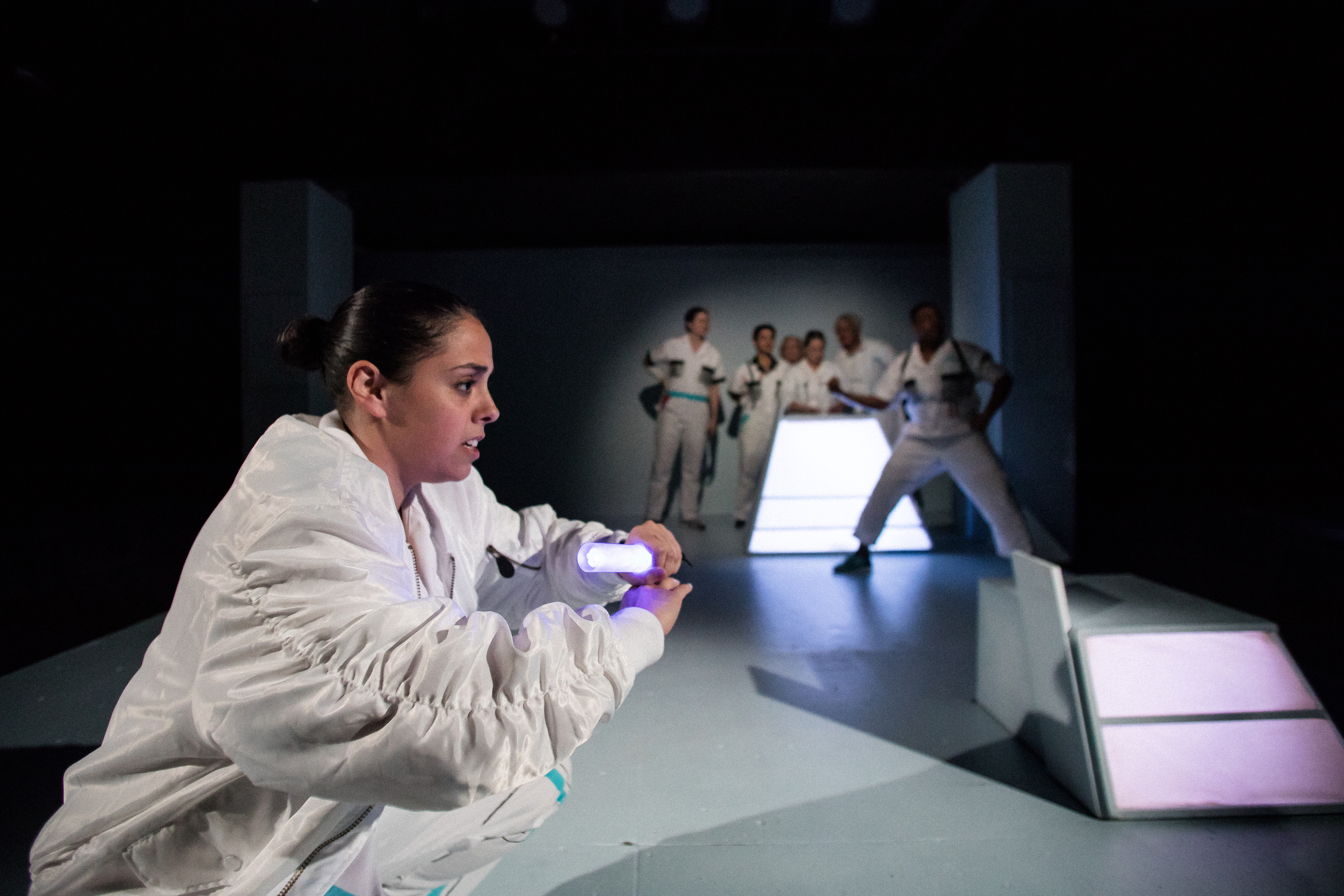 Babes With Blades’ mission is to bring to life “complex, dynamic female characters” and with “Women of 4G,” I would say: mission accomplished. Written by Amy Tofte, directed by Lauren Katz, and driven by a strong, all-female cast, this new play transforms The Factory Theater into the flight deck of an active-duty spaceship. I witnessed takeoff Sunday afternoon of opening weekend and although the crowd was lean, the reactions were not. This sci-fi original is part classic murder mystery, part probing workplace drama.

Set seventy-five years in the future, the play follows a seven-woman space crew attempting to complete their mission after the mysterious death of their male captain. The main characters are presented as Ashley Yates’ First Officer Stark and Jillian Leff’s Ensign Pierce, two women struggling with the power dynamics of working underneath a male captain and an underlying system that pits women against each other. These sci-fi characters pose very real, very relevant questions about how the patriarchy systematically minimizes female achievement through manipulation and microaggressions.

Stark and Pierce are the principal characters, but the clear stars in this solar system are Jazmín Corona and Renee Lockett. While most of the cast takes at least one scene to hit their rhythm and accept the circumstances of the play, Corona and Lockett pull you into their world with belief in the environment and conviction in what they’re saying. Corona especially shines when she speaks about her character’s work, engaging an audience of right-brainers with left-brained ideas of science and analytics as a promising catalyst for change. Interpretive movement is used by the entire cast during spacewalks and transitions and this physical storytelling is effective in communicating the integration of the team members and their presence in the cosmos.

The minimalist set does an excellent job in focusing the audience’s eye without spelling everything out. The adaptable three-piece set has clean, futuristic lines and allows multiple scenes to play out uniformly without becoming monotonous or resorting to B-movie nostalgia. The lighting on and in the set radiates modernity and unity, themes evident in the play itself. The one design element that distracts from the aesthetic vision is the costuming. The set and lighting portray a pragmatic, inventive future world while the costumes feel retro and commonplace in comparison.

Space travel, like much of human history, has women doing decisive work and not getting any credit. The women of 4G encourage audience members to “be the captain” even when “the man” won’t let you. Women drive change, fight, swear, make choices, and, sometimes, fail, not because they are women but because they are human. Women making sacrifices for future generations only to be left out of their own narrative is a paradigm everyone is familiar with but “Women of 4G” contends that women are not the archetypes they’ve been cast as. We are not damsels, we are not the great women behind great men, we are not just sisters or daughters or mothers. We are human. We are captains. And we tell our own story. (Hayley Osborn)