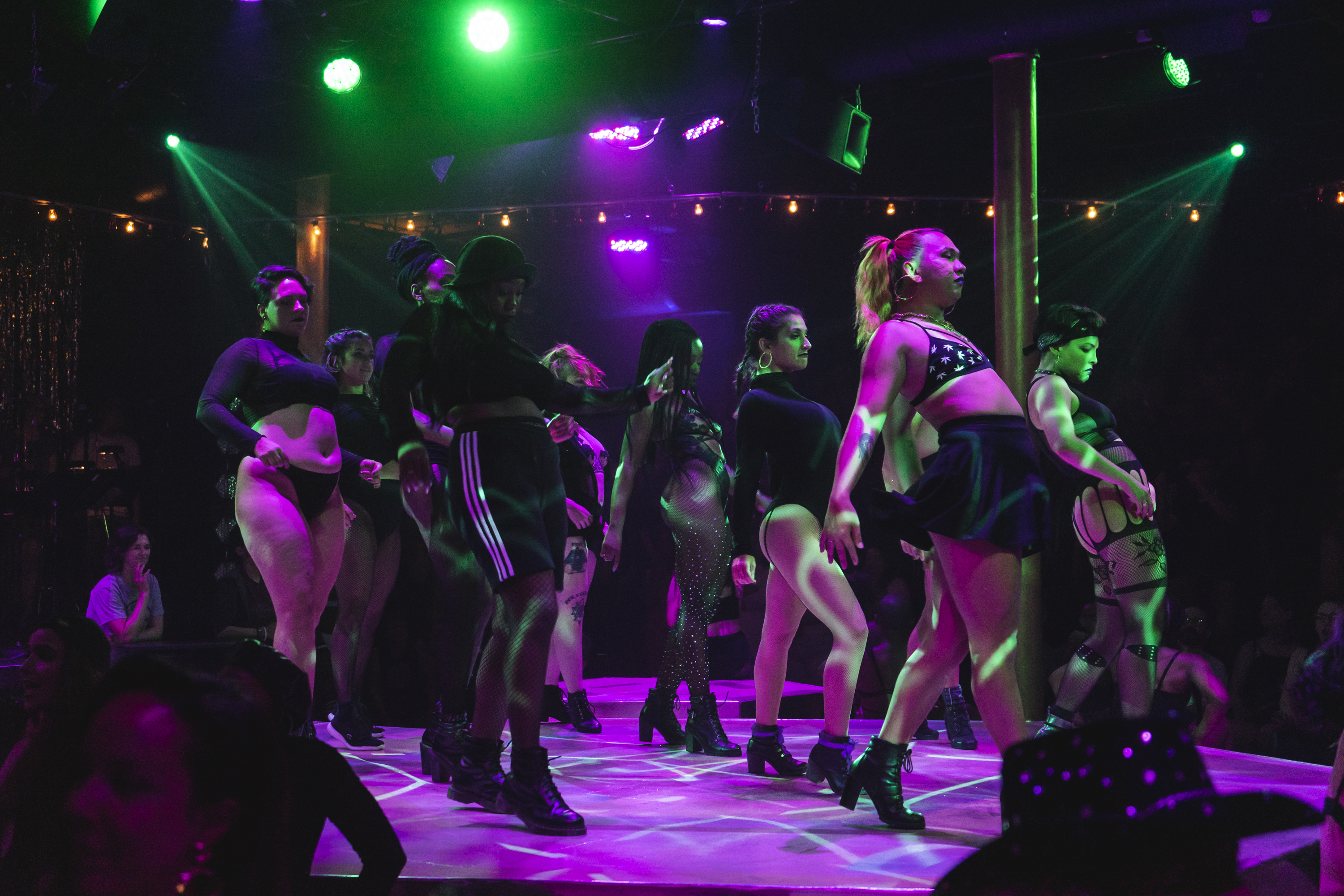 Sickened by the current state of affairs? Don’t despair, little birdie, The Fly Honey Show can treat what ails you. Erin Kilmurray’s fishnet-clad, fem- and queer-fueled cabaret-variety show, now in its tenth season, is a raucous, raunchy, righteous balm for the soul wearied by Epstein and friends, Trumps, white nationalists and the decidedly un-fly patriarchy peskily at play. And with things this bleak, it’s gonna take a big dose of honey, little bee: three hours, starting around 10pm, or whenever feverish patrons are fully ushered around the Den Theater’s first floor thrust (get it?) stage, packed into standing room and ready to make noise.

Need a little shouting therapy? You’re in the right place. This show demands holler-backs, starting from the extensive opening number featuring the nine-piece brass Honey X Band, as kinkily clad as the dancers who spill over centerstage and surrounding daises, posing, grinding and shaking ass with ferocious sexiness under spinning disco balls and dazzling purple spotlights. Feel like the world around you could use a prescription for basic decency? The Fly Honeys have the scrip in the show’s ground rules, laid out by a potent “Host Trifecta” of Sydney Charles, Mary Williamson and Molly Brennan, covering such basics as consent before touching, respectful means of address to people of all genders, and other how-generally-not-to-be-an-asshole guidelines that apply outside the walls of the Den, too. Thank you, Fly Honeys!

For the tenth-anniversary season, the Show for Every Body, No Matter the Body has expanded to five weekends—fifteen performances—and stars a rotating cast of performers from female hip-hop MCs to poets to performance artists to an all-female mariachi band. Every show is different, with four guest artists each weekend doing a three-show run, plus a one-night-only guest performer. Highlights from the second weekend, the one I attended, included “Black Queer Hoe,” a spoken-word performance by Britteney Black Rose Kapri so rousing that Kapri had to stop more than once to remind the vocally appreciative audience that they only had five minutes on stage; and a moving performance by Muslim-American writer-performer Arti Ishak who, over a recording of herself reading a piece on the complexity of being of Arab descent in America, took the stage in g-string and pasties, and gradually put on clothing one article at a time, finishing with a headscarf as the reading concluded. And I can only hope for you, little bee, that the Host Trifecta perform their “My Way” closer to Act I every weekend, in which karaoke, cabaret and striptease slam into a garment-rending, tits- and soul-baring new art form. Funny, ferocious, vulnerable, naked in every sense: it’s camp transcendent.

A staggering thousand-plus performers have cumulatively ravaged the Fly Honey stage since the inception of the show, and about a third are representing between August 8 and September 7. A portion of ticket sales are donated to the national advocacy group Ultraviolet, which works to disrupt the patriarchy and improve the lives of women of all identities and backgrounds, so the bill goes to healing both within and outside the room. It is, in every way, worth it and might just be, as they say, the show we need, right now. (Sharon Hoyer)