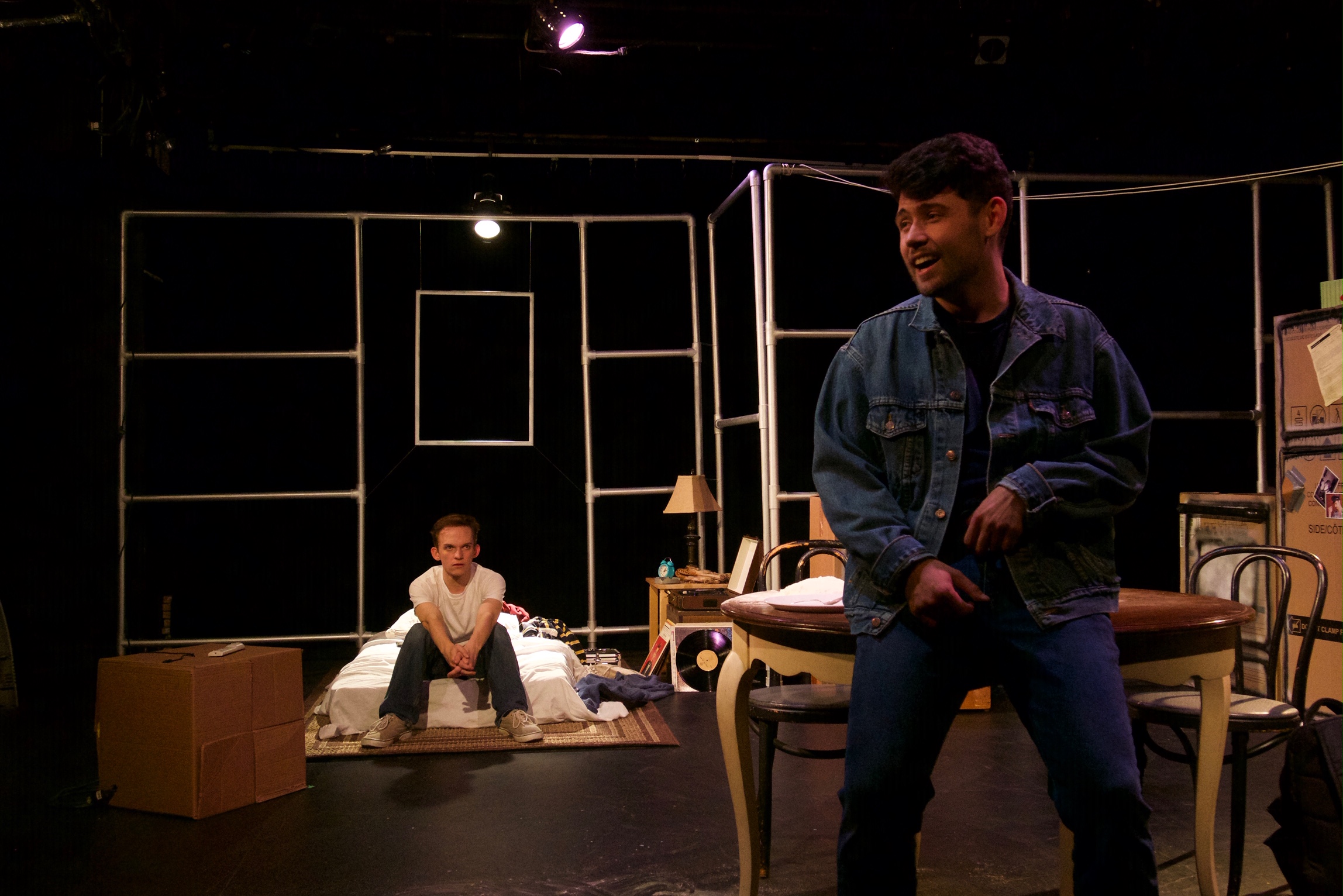 Whether on stage or on film, there’s a naturalistic rhythm to Kenneth Lonergan’s consistently realistic dialogue. Characters rarely say things that are especially poignant as standalone statements (although it’s a wholly different story for the pieces themselves, which are emotionally hefty) and everyone talks a lot more than they need to, getting to their points in roundabout ways (you know, like in real life, man).

Lonergan’s subtle exchanges and sometimes meandering scenes require a careful hand and strong choices by everyone involved, especially on stage. And from the early moments of The Quarry Theatre Company’s short-run production of “This Is Our Youth”—staged on an intentionally sparse set at the Piven Theatre in Evanston—it’s clear that the two leads—Tommy Montgomery and Jack Rento (who also co-produced, co-directed and co-designed)—have a firm grip on both the tenor of the piece (simultaneously aimless and driven) and the contributing factors behind their characters’ every move.Early exchanges between Dennis (Montgomery) and Warren (Rento), young men whose lives, packed with a heady mix of privilege and underlying psychological abuse, have already left them feeling both stuck and adrift, showcase a fraught, troubled relationship between two fraught, troubled young men:

They’re always seeking but never sure what they’re looking for. Montgomery and Rento dive deeply into their characters: Montgomery as the outwardly tough but inwardly insecure Dennis and Rento as the outwardly insecure but inwardly tough Warren. Montgomery plays Dennis in a constant state of working so hard to prove how effortless life is for him that he’s ready to explode unexpectedly at any moment.(“I’m like a one-man youth culture for you pathetic assholes!” he declares at one point.) while Rento—who has hints of Elijah Wood in his stage presence—brings a nervously grounded and deeply eager-to-please energy to the hapless Warren. The two are apt foils for each other’s weaknesses and it’s quickly evident why they’re friends, even if they’re constantly bickering.

When Warren shows up at Dennis’ apartment with a backpack full of cash stolen from his frighteningly connected father—”My father is not a criminal,” Warren insists, “He is just in business with criminals”—the two, after much deliberation, make a rough proposal to invite over some girls, buy some blow, have a party and sell the remaining coke to ensure they can return all of the money by the next day. From the start it’s clear that their plan is doomed. They just don’t know it yet.

Warren gets a shot with the current girl of his dreams, when he ends up alone in Dennis’ apartment with Jessica (played with a perfect mix of skepticism and guilelessness by Megan Wilcox). Rento and Wilcox play out the unlikely courting scene between Warren and Jessica with intellectual rigor and a sense of playfulness that makes the direction the night takes between the two feel both obvious and unexpected. This scene provides a tender heart to the production. A later, much heavier one between Rento and Wilcox in act two, breaks it.

As a writer, Lonergan is interested in everyday lost souls and the slow laying bare of their stories. The members of The Quarry show in their first production that they have both the interest and the talent to delve into the lives of complex, confused characters and reveal the humor, horror and humanity within them.

I last saw this show at Steppenwolf with Michael Cera, Kieran Culkin and Tavi Gevinson in the lead roles. Rento, Montgomery and Wilcox do the characters every bit as much justice as that star-studded cast. (Zach Freeman)