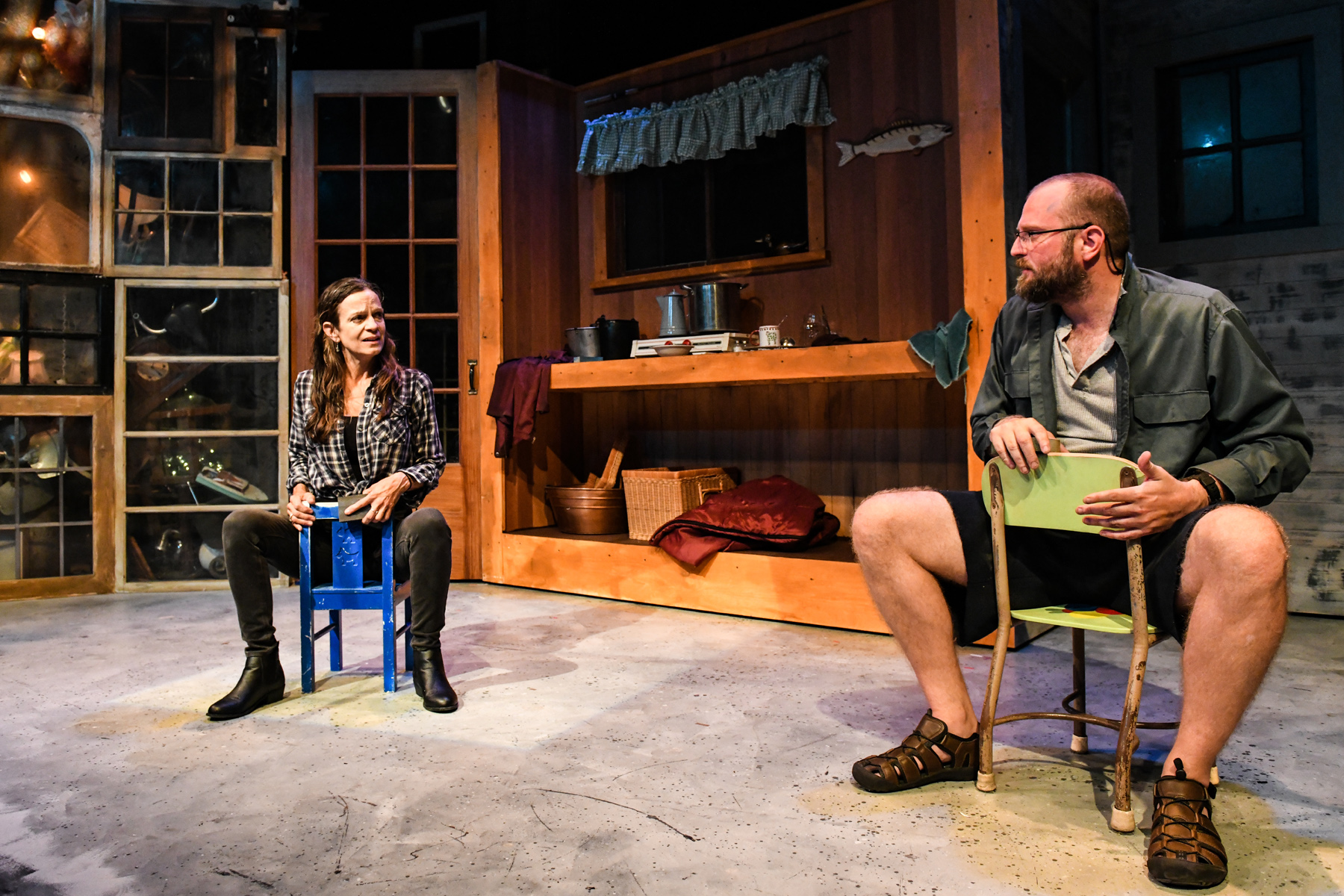 Sharp of wit and warm of heart, Shattered Globe’s “Be Here Now” is a poignant and pertinent exploration of the “pursuit of happiness,” that keystone of American identity. Part satire, part romance, part melodrama, playwright Deborah Zoe Laufer’s ninety-minute work skillfully mixes comedy and philosophy, asking some heavy-duty questions with a light, sure touch.

The story concerns Bari, a scholar who—surprise, surprise—can’t seem to find the motivation or sense of purpose to complete her doctoral thesis on nihilism. Dropping out of academia, she has returned to her small, claustrophobic hometown and taken on the role of village cynic. When we first meet Bari, she is grudgingly participating in a yoga class with her co-workers, yawning with unsuppressed boredom and holding her ears to block out the om-chanting emptiness of the experience. Later, at the catalog fulfillment center where she works, shipping schlocky Buddhas and other New Age kitsch, she tells her bouncy, youthful colleague Luanne, who is seeking romantic advice, “Whatever you choose, it will end in grief.” Bari’s personality is a gruesome blend of superiority, irascibility and weltschmerz, so over-the-top it’s almost cute. In a happiness-obsessed, Prozac-popping society, Bari’s aura of surly wretchedness seems to be a way of asserting her individuality, the behavioral equivalent of a nose ring. But Bari is reaching the point where her chronic misery is beginning to make her, well, unhappy. And so she reluctantly agrees to meet the cousin of Patty, her older and tougher co-worker and the work’s moral center.

Before the blind date with cousin Mike transpires, Bari experiences something between an epileptic fit and an LSD trip, signaled by flashing colors (courtesy of lighting designer Shelley Strasser Holland) and a burning smell. It’s an epiphany, creating a momentary sense of cosmic oneness and joy. “The whole world is art!” she gasps. Nihilism is out the window and love is in the air, as Bari’s dreaded date with Mike—another oddball loner, but a nice one, who lives off a MacArthur Fellow grant won for building houses out of random garbage—turns into a night of unbridled passion.

There’s only one catch: Bari’s euphoria is actually a symptom of a serious medical problem, which may well kill her if left untreated. She must choose between her precious, newfound happiness and her otherwise unbearable life.

Director Sandy Shinner breathes humorous life into this stark premise with the assistance of a gifted, chemistry-rich cast and Angela Weber Miller’s marvelous set, an assemblage of stacked detritus suggesting Mike’s rubbish-based residences. Every aspect of the production meshes beautifully with every other, reminding us of just how compelling small-scale ensemble theater can be when executed with intelligence and imagination.

Laufer’s clever dialogue is delivered with unhurried, natural ease by actors who are manifestly comfortable with and responsive to each other. The quartet of actors shine, especially Rebecca Jordan as Bari, who convincingly captures both extremes of her schizoid character, and Joe Wiens as love interest Mike, who deliberately underplays his blandly passive man-of-mystery role, hinting at depth and feeling below the layers of emotional scar tissue. Deanna Reed-Foster and Demetra Dee, as Patty and Luanne, are the entertainingly “normal” foils to Bari and Mike, engaged in a full-time quest for happiness via prescription drugs, religion, self-help nostrums and militant positivity. Beneath all the characters’ goofiness and self-absorption, there’s a human and communal bond that surfaces in response to Bari’s health crisis, giving the show something approaching, if not a happy ending, then at least a semi-hopeful one.

But the questions raised by this sneaky-smart play are provocative and disturbing ones. “Who are we?” wonders Bari in the grip of her disease-induced ecstasy. Is she the victim of a happiness hallucination or have the seizures somehow made her the person she was meant to be? Wisely, the playwright leaves the question open for viewers to ponder post-curtain. At the end, Bari is neither despondent nor radiant but in some more mature and less isolated place in between. No longer either fleeing from happiness or chasing after it, she seems to have settled calmly and quietly into herself. It’s a character arc to savor and to learn from. (Hugh Iglarsh)