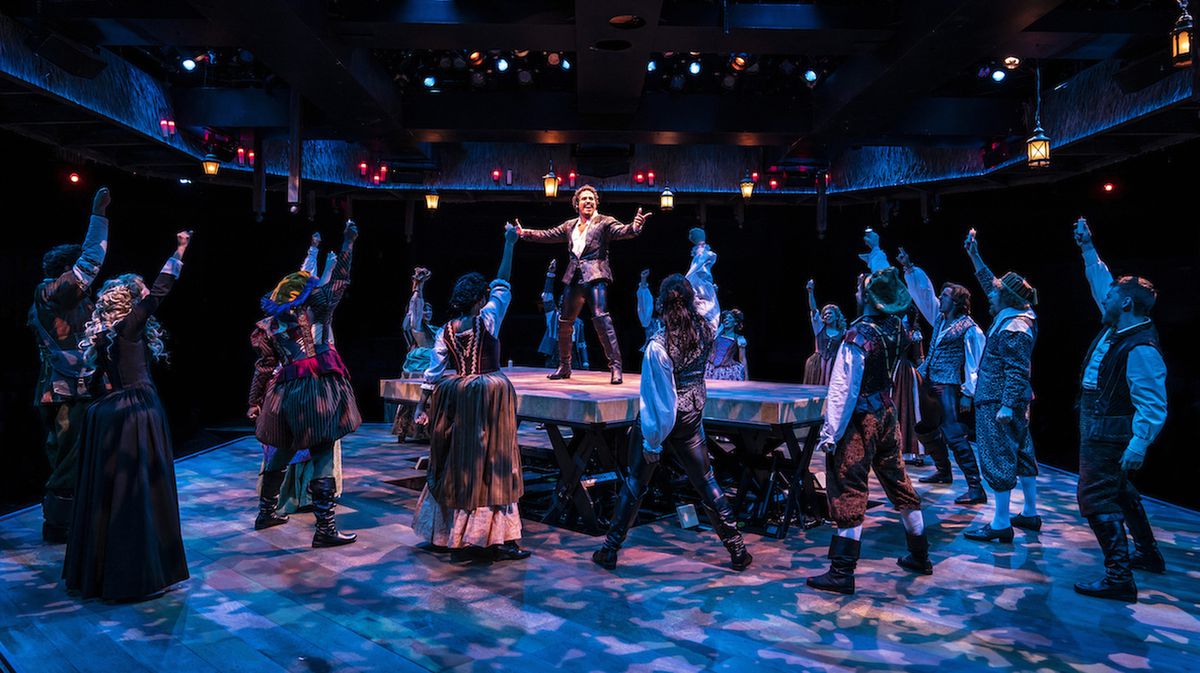 The cast of “Something Rotten”/Photo: Liz Lauren

There is nothing rotten at all in Lincolnshire. In fact, most people will find this Marriott Theatre production of “Something Rotten!” to be quite delightful. Nominated for ten Tony Awards, this 2015 musical comedy takes aim at everything from the Renaissance to Shakespeare to “Cats.” This production also offers some truly brilliant choreography by Alex Sanchez and is even performed in the round. Methinks Shakespeare would approve.

Set in 1595, the musical focuses on a budding rivalry between the Bottom Brothers (a pair of struggling playwrights) and a certain Will Shakespeare. Portrayed as an obnoxious rockstar, Shakespeare (Adam Jacobs) finds it easier to plagiarize others than to sit down and write a new play. The two brothers have their own ideas. The older of the two, Nick (KJ Hippensteel), has Thomas Nostradamus (cousin to the more famous Nostradamus) foretell Shakespeare’s future greatest hit, with the thought that he can then preemptively steal it. And while this Nostradamus can predict the advent of musicals (as well as several big titles), he misidentifies Shakespeare’s next masterpiece as “Omelet.” Undaunted, Nick takes this shell of an idea and runs with it. The end result is a mishmash play like no other that manages to fit the highlights of a dozen or so musicals into the framework of a classic Shakespearean tragedy.

“Something Rotten!” is a good play that, when performed by this exceptionally talented cast, approaches being a great play. While rarely hilarious, there are laugh-out-loud moments. And the dancing is absolutely sublime. One weakness is the inoffensive nature of the script, which lacks both the silliness of “Spamalot” or the raunchiness of “Avenue Q.” The music too, while competent, lacks that one big breakout number, although “God, I Hate Shakespeare” comes close. That is not to say that “Something Rotten!” is not worth seeing. But if you plan on only seeing one musical comedy this year, it might make more sense waiting for “Book of Mormon” to come back to town. (Noel Schecter)