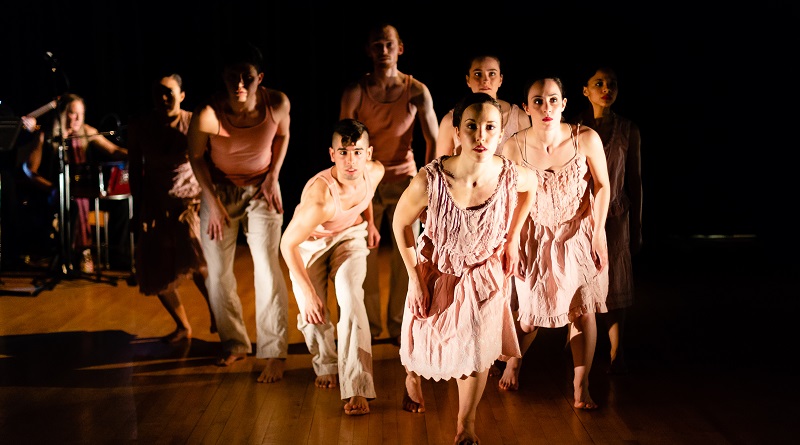 Wilfredo Rivera is co-founder and the dance half of Cerqua Rivera Dance Theatre, a company that for twenty years has been staging an original, abstract brand of musical theater that puts equal importance on choreography, original jazz compositions and visual art. Rivera talked with us about the company’s highly timely “America/Americans” series of concerts, which travel from Evanston to Hyde Park to the Loop to the Northwest side.

Your piece, “American Catracho,” has been in development for three years. Quite a long time. What was your process creating it?

It takes my personal immigrant story from Honduras and gives it a universal lens. One of the reasons I decided to make it a three-year process was to widen that lens and invite other artists to contribute to the conversation. I wanted it to be an artistic conversation about what the stories are and who are the people behind the headlines. As artists we can all relate to the human experience, but in this case to focus on the story and share that knowledge with the musicians and dancers. At the end of the day, it’s going to be many layers of voices and choreography, but delivered as one voice.

Who are your collaborators?

The choreographers were Noelle Kayser, Christian Denice and myself, with Joe Cerqua composing the music. The research came from a trio of resources: a psychologist who lives in Florida who does work with immigrant families; Shawn Lent here in Chicago who is a social arts dance practitioner working with the Syrian community; Cecilie Keenan, a theater director here in Chicago––her background is culturally diverse theater. We did a lot of research on documentaries and personal stories of immigrants from around the globe. Our research was watching these documentaries and having a group table discussion about immediate human response. A lot of these stories are hard to listen to and watch, especially in the last ten years, these people are fleeing out of terror or deep poverty. Very different then when I came here.

Could you speak about the two other pieces, on the B program?

This particular whole program reflects where the company has been and where it’s heading, really searching contemporary identity issues. Monique Haley is diving deep into engaging as a professor in dance, and putting a structure to her pedagogy, but more particularly coming as an African female in dance. How she can research her ancestry and take elements that invigorate her way of making choreography. That project was really tasty and has a lot of meat to it. That piece is an exploration of ritual, coming from the diaspora.

I’ve always been attracted to Shannon Alvis’ work, because I see the elements of storytelling. Shannon is at a point spiritually where she wanted to investigate her Native American ancestry, which had been shoved down in the coffins. Her grandmother was Blackfoot and was sent from Montana to the Southern states to marry. The family, out of shame… A lot of Latinos and Native Americans tend to put our language and culture in a vault to have another façade. We talked deeply about her spiritual journey. These three pieces are about community, hope, renewal, finding home, a new common identity. It was a very interesting journey getting to how she was going to physically explore these questions.

There is a Native American sculptor we had many conversations with about how he settled into his heritage. When he was young, he was encouraged to select African American on school applications because he could get scholarships or accepted into certain schools or have opportunities if he identified this way. He was living his life as a black professor in France when his grandmother came to him in a dream and scolded him for pretending he was something he was not. So he came back to America to explore his roots. He shared his experience and as you can imagine there were tears, a lot of hugs.

This is what inspires me to do this work. The choreography comes as the fourth, fifth layer of all the stuff that has happened before. And there’s a reason these are female choreographers. I’ve been working on setting the table for women and people of color in leadership roles.

These themes you’ve been working with for three years are increasingly at the fore of the national conversation and abysmal policy.

On a personal level: a lot of the imagery in the piece, people are traveling through borders, through bodies of water, through fences, through the desert. I know people––relatives, colleagues––who have gone through that. Now to see it to the level that it is right now, how it’s risen in danger and suffering, it’s incredible. My parents now live with me; they had to escape from Honduras three years ago. They’re musicians who owned their own pool hall and dance cabaret. They were music presenters. They had to flee because of gang violence. They had to pay the gangs to keep their business open and they couldn’t keep up with the payments. They were held at gunpoint several times, taken to the bank to withdraw money. When you know personal stories to this magnitude, when people say there’s nowhere to go, there’s literally nowhere to go. Now they’re playing gigs in Chicago and finding places are empty. The kitchens are empty, the restaurants are empty because people are in hiding. Busboys and chefs are grabbing their bags and hiding. It’s weird when you’re living in that sort of world. People are afraid to get on the bus, on the train.

Artistically, the whole idea of “American Catracho” began in 2009, and I explored the idea of traveling to different places and its effect on your senses. The images and concepts were in place before this happened because, honestly, the circumstances are the same, just amplified in a grotesque way.

I should say at the end of the day there’s hope. I’m a product of that and people who have recently arrived are a product of that. That rebirth and the Phoenix it can happen. The last section of “American Catracho” is about this hope.