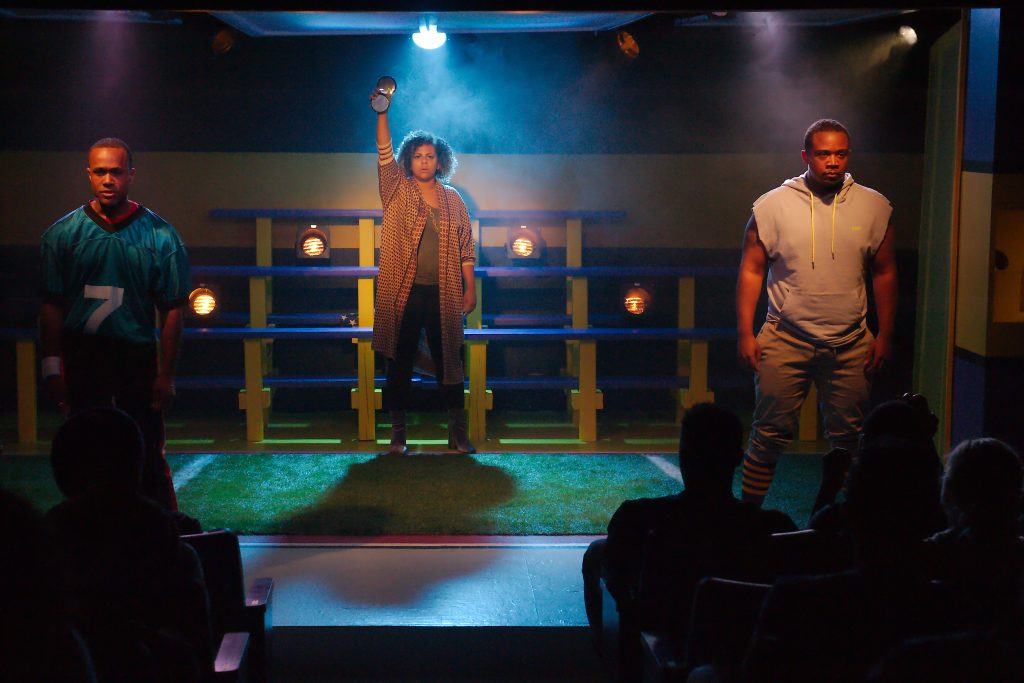 Newcity contributing theater writer Loy Webb’s sophomore outing as a playwright, “His Shadow,” affirms that the out-of-nowhere success of her 2018 debut, “The Light,” was no fluke. In this new work, receiving its world premiere in the intimate 16th Street Theater space in Berwyn, Webb takes on the controversy surrounding NFL player protests against police violence during the national anthem since the 2016 preseason.

Webb calls her play “A Parable,” and it’s structured as a creative polemic: Teeny (Charles Andrew Gardner) is the younger brother of Juice (Marcus D. Moore), an NFL football star who is, in every sense of the word, a perfect human being. Teeny, a gifted athlete himself, resents living in his brother’s imposing shadow and sets out to college as a quarterback in “Middle of Nowhere, USA” and quickly bonds with Kodak (also Moore), a full-of-life receiver who will help him accomplish his dream of making a name in his own right. On campus, they are smitten with an activist, Rain (Anna Dauzvardis), who hopes to get them to protest a local police shooting. Teeny, standing in for many Americans conflicted by the saga of Colin Kaepernick and others, expresses support for her cause but is not willing to get involved lest it divert him from his personal goals. Until, that is, tragic events make the cause personal for him.

Webb’s story, with its over-the-top use of archetypes, is on the border of too-too didactic, but whenever it gets close, the story manages to avert it, often through clever wordplay steeped in slang. And the effusively charismatic performances of the three actors, especially Gardner and Moore as “brothas for life,” delivers a painful message with a spoonful of hope and warmth. Director Wardell Julius Clark keeps the whole thing moving at a crisp pace and, with actors playing multiple parts among multiple settings on a tiny stage, without forsaking clarity. (Brian Hieggelke)