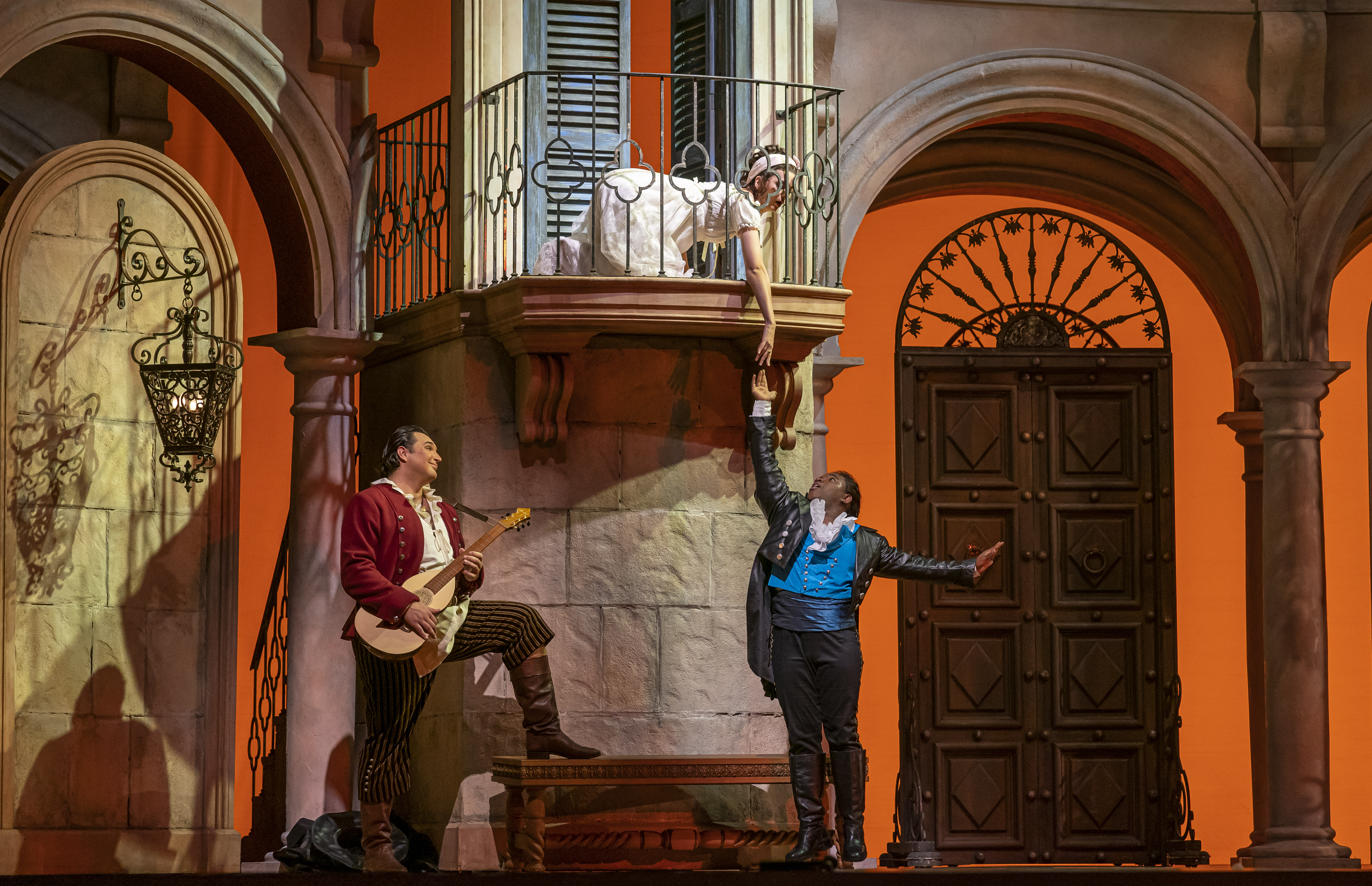 The glitterati were out in full force as Lyric Opera of Chicago opened the season. Satin, charmeuse and chiffon slinked, slithered and bounced down the red carpet at the entrance to the theater on Upper Wacker Drive. Costume, mother’s and rented jewelry caught every lamp and shared their spark. Whether it was Pierre Lorillard IV or King Edward VII who invented the tuxedo, he did the world a favor. Absolutely everyone looks good in evening dress and opening night at the Lyric Opera proved it again. Everyone was taller and more regal, with many dreaming of the opera ball to follow, one of the high society events of the season. Everyone was a prince or a princess, if only until the ball was over.

“Barber’s” plot is a kind of de trop in itself: beautiful young ward, squirreled away from the world by elderly, tyrannical guardian, is rescued at the last minute by a handsome young man she meets when he first spies her as he stands in the street below her balcony before her guardian can force her to marry him. Add disguises, pratfalls and comic treachery, and that’s all you need to know.

Director Rob Ashford’s production, as revived by Tara Faircloth, provides the perfect complement to the festivities. Figaro bounces, Rosina slithers, and Almaviva slinks as if there was no fourth wall between the audience and the players. If they had joined us in the lobby at intermission, no one would have been surprised. Designer Scott Pask’s grand, malleable set is one of the delightful characters in the piece. Catherine Zuber’s costumes add to the fun. Although this production has been at Lyric before, it has so much to commend. This is such a different and specific cast that seeing and hearing it is a must.

Leonard Bernstein’s podium tempi became slower as he moved into his majority. Not so with Sir Andrew Davis, whose wrists and fingers seemed to jump out of the pit, challenging the singers to fly through Rossini’s athletic melisma. If they looked just a little surprised a couple of times, they met him at the gate and sped to the dénouement with him, carried on the wings of Lyric’s fine orchestra. Sir Andrew will be leaving us soon enough, which makes catching his every performance this season an imperative.

In the title role, Adam Plachetka provides a different character from the Nathan Gunn barihunks who can start their first scene in their underwear (and do) and are so altogether fetching, charming and elegant that one has to wonder why Rosina is going on about this young scamp to which she has not been formally introduced when the dashing Figaro already has access to the house. Plachetka plays Figaro as a Shakespearean wise fool, which dovetails beautifully with Beaumarchais’ character plotting. His singing is virile, his coloratura a thing of great beauty. He is altogether successful as the majordomo of the evening.

Marianne Crebassa’s Rosina makes one imagine what Marian Malibran, a major interpreter of the role in the nineteenth century, must have sounded like. Written accounts recall a voice of power and flexibility, with a warm and easy chest register and a range capable of both alto and soprano roles. Crebassa’s mezzo-soprano never seems to shift gears, blithely sitting pretty in the lower range, then dashing to heights that would make some sopranos weep. Her portrait is not one of a wilting flower. Rather, this ingenue intends to escape her prison in any way possible and is every bit as integral in designing the elopement plan as the boys.

The star of the evening is tenor Lawrence Brownlee, of the effortless high notes and the ridiculously fast coloratura. Brownlee tosses this role off as if he’s at lunch. And indeed he is, as this particular role, at which even tenors with a good top range and studied flexibility turn white at the lips, is nothing compared to some of the Bellini repertoire he regularly sings. He seems to revel in the opportunity to race about the stage and play the scamp and is outrageously effective as the Count Almaviva who disguises himself as Lindoro who disguises himself as a drunk soldier and then a music teacher in a plan to steal away with the young beauty on the balcony.

Lyric’s season has plenty of Sturm und Drang, with productions of “Luisa Miller” and “Dead Man Walking” in the queue. Why not put on your Sunday best and escape with Rosina? (Aaron Hunt)