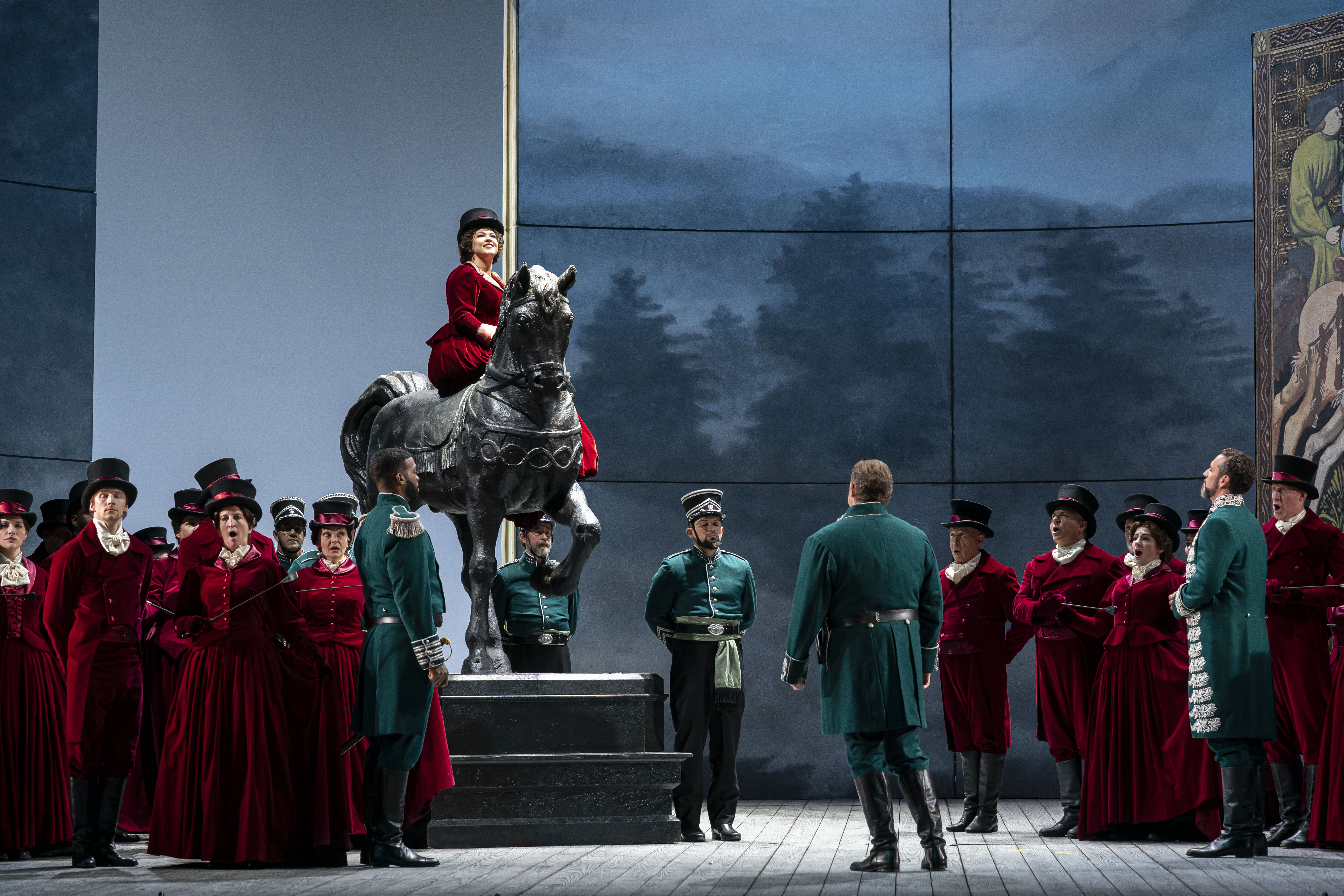 The second stunner of an opening in Lyric’s season has Enrique Mazzola on the podium for his third time since his Lyric debut during the 2016-17 season. Mazzola is Lyric’s music director designate and begins his reign with the 2021-22 season. With this production of Verdi’s “Luisa Miller,” Mazzola sets off a Lyric Opera exploration of the early operas of the composer, one of his specializations, all to be conducted by the incoming maestro.

Considered a transitional piece between Verdi’s early and middle periods, “Luisa Miller” makes way for the landmark “Rigoletto” and “La Traviata.” While this is the fifteenth opera by this prodigious composer, it is considered by some to be only his fourth opera of note. Librettist Salvadore Cammarano’s story has its genesis in Schiller play “Kabale und Liebe” (“Intrigue and Love”). Herein, Verdi begins to find his way from the highly structured operas of Donizetti and Rossini, the leading composers of bel canto opera during the first half of the nineteenth century, to a more drama-driven, natural narrative style that marked his final masterpieces such as “Falstaff.” While ensconced in the operatic structure of the time, this opera is less Donizetti in “Barber of Seville” and more Bellini dripping a spicy mole sauce. Giving more presence to the orchestra as a central character, Verdi makes fuller use of dialogue recitatives, building tension in a more gradual and profound way as evidenced by the finale of act two, which progresses in stages of accelerando. A growing, personal palate of orchestration is on evidence here, and unhappy moments are seldom conveyed in chirpy major keys.

Mazzola has the strength of his own convictions and the confidence in concept of ensemble larger writ to allow moments of searching between singers and orchestra to play out naturally, not dictating as much as facilitating a search for equilibrium. Lyric’s fine orchestra responded with the kind of relaxed focus that sparks excitement about their collaborations in the future.

In the title role, soprano Krassimira Stoyanova is a constant revelation. With a creamy middle voice, easy flexibility and bright high notes, this diminutive singer with the big voice recalls Katia Ricciarelli, who excelled in this role during revivals of the opera in the 1970s to great acclaim. Singing Rodolfo on opening night, tenor Joseph Calleja was likely suffering from the autumnal mold prevalent in this lakefront city, with audible phlegm in some of the highest passages and some vocal fatigue by the opera’s final moments. Yet his “Quando le sere al placido,” Rodolfo’s aria of remembrance and grief, was exquisite in every sense and wildly received.

Two alumni of Lyric’s Ryan Center program put into sharp relief the success of that venture to train the artists of the future. As Walter, bass-baritone Christian Van Horn’s voice, presence and sense of character was a model of the total package that today’s working operatic artist must achieve for continuing success. Quinn Kelsey made nice work of Miller, one of the lighter roles in his current repertoire. This Verdi baritone (now considered as much a vocal category as a fach, or most advantageous repertoire) took every opportunity to display his instrument’s ability to spin a lyric line and created a believable character awash in pathos.

Mezzo-soprano Alisa Kolosova made her Lyric debut as Oga in “Eugene Onegin” during the 2016-17 season and made such an impression in the relatively small part that Chicago audiences were left wanting more. Her Federica delivers in spades, this role giving her warm, ample mezzo plenty of room to roar to the heights and glow in the embers. As Laura, first-year Ryan Center member Kathleen Felty sang with an easy and attractive mezzo-soprano and exhibited a good stage sense that makes her one to watch. In his Lyric debut, bass Soloman Howard made such vivid impression that Chicago must be waiting in breathless anticipation for his undertaking of the role of Fafner in this year’s “Ring.”

With dramatic differentiation between the village of the Millers and the court of Count Walter, director Francesca Zambello’s production points up the class war on display in Schiller’s original play, rather than allowing this important plot point to disappear almost entirely into the background as was Cammarano’s intent. This brings this would-be simple story to significant relevance in today’s time of political unrest and opens the door for a contemporary audience to connect with operatic abandon. (Aaron Hunt)