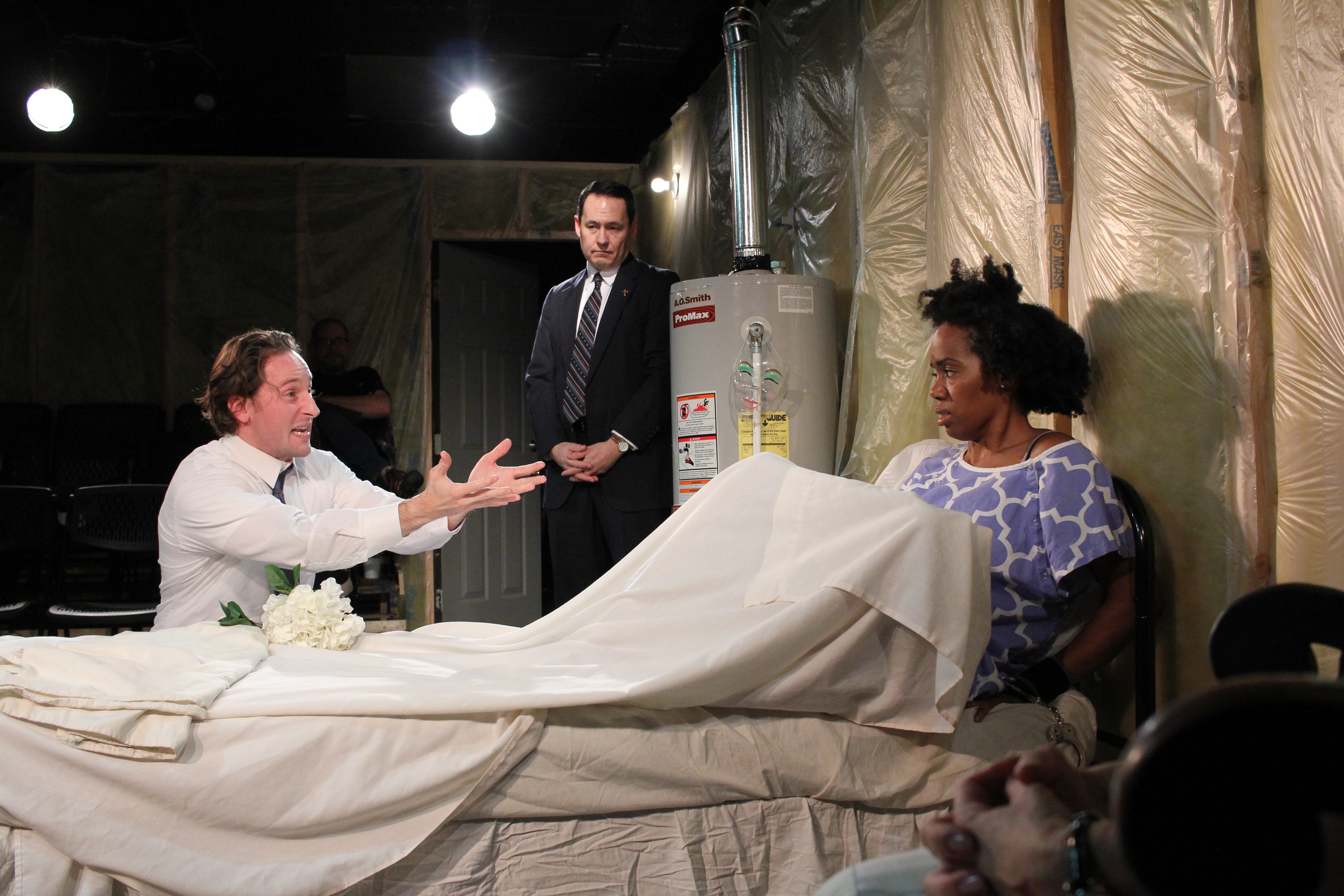 That’s the best word to describe the circumstances of this show.

That’s the best word to describe the visceral reaction to this show.

There were only a few moments in the hour-and-a-half of “Keely and Du” when men were onstage that a sneer didn’t crawl across my face. The age of this 1993 play doesn’t show at all. As we find ourselves, once again, arguing about the autonomy of a woman’s body, it’s difficult to remember that this is only a play.

Keely (Keisha Champagne) is a rape victim. She’s pregnant and seeks an abortion when activists from a Christian extremist group kidnap her, handcuff her to a bed and keep her in a dingy basement for five-and-a-half months. Don’t worry, this is all to protect her fetus. It’s totally normal and loving. It’s not at all horrifically cringey and a prequel to the “Purge” series.

On top of all of that, Keely is a black woman held captive by a group of white folks. That dichotomy pushes the conflict of this show even further. Now it isn’t just a matter of a woman’s right to her own body, but a matter of a woman of color fighting for her freedom from a bunch of psychotic white people. It’s impossible not to think of Atatiana Jefferson, the black woman murdered by a white male police officer in her Ft. Worth home this week.

While the content of this play by Jane Martin is batshit crazy, to say the least, the performances heighten the turmoil, despite the numerous blackouts that Martin wrote into the script, which do pull attention. Champagne gives Keely a fighting chance. Her range of emotion is heartbreaking in all of the right places and stoically hilarious in others. Never have I fought my baser instincts so hard. I’m not sure what stopped me from crossing the three-foot distance to comfort her, despite knowing full well it was a play.

Jacqueline Grandt, as the grandmotherly Du, might have been the reason. As Champagne’s nearly constant scene partner, Grandt is a powerful second half of this duo. Together, they seamlessly portray two entirely different struggles of womanhood. To rebel or to settle, to fight or to fall back, to forge on or to forget. Despite their circumstances, this partnership finds an unspoken rhythm. One that Pastor Walter (a frightening Ben Veatch) constantly interrupts.

This play is a literal nightmare. In all the ways that “In The Canyon” was our worst-case scenario for the future, “Keely and Du” is our worst-case scenario for the present day. I absolutely hate that men can freely laugh during this play. I hate that the women in the room stifled laughs and pained sounds. I hate that, when I looked around the audience, I saw men’s eyes grew to the size of saucers when Walter or Keely’s abuser Cole (Joe Edward Metcalfe) said something horrific (and utterly unsurprising). What I hated most of all was the shared glances with other women who knew exactly what abusive language sounds like.

If you want to know what it’s like to be a woman, to not have the right to your own body, to be owned by the societal forces wielded by other people, to be overpowered by men who know or don’t know you, then you should see this play. If you’re a woman who knows all these truths so well you could swing your arms in any direction and hit your past traumas, encourage the people you love to see this play. You can skip it. You lived it. (Amanda Finn)