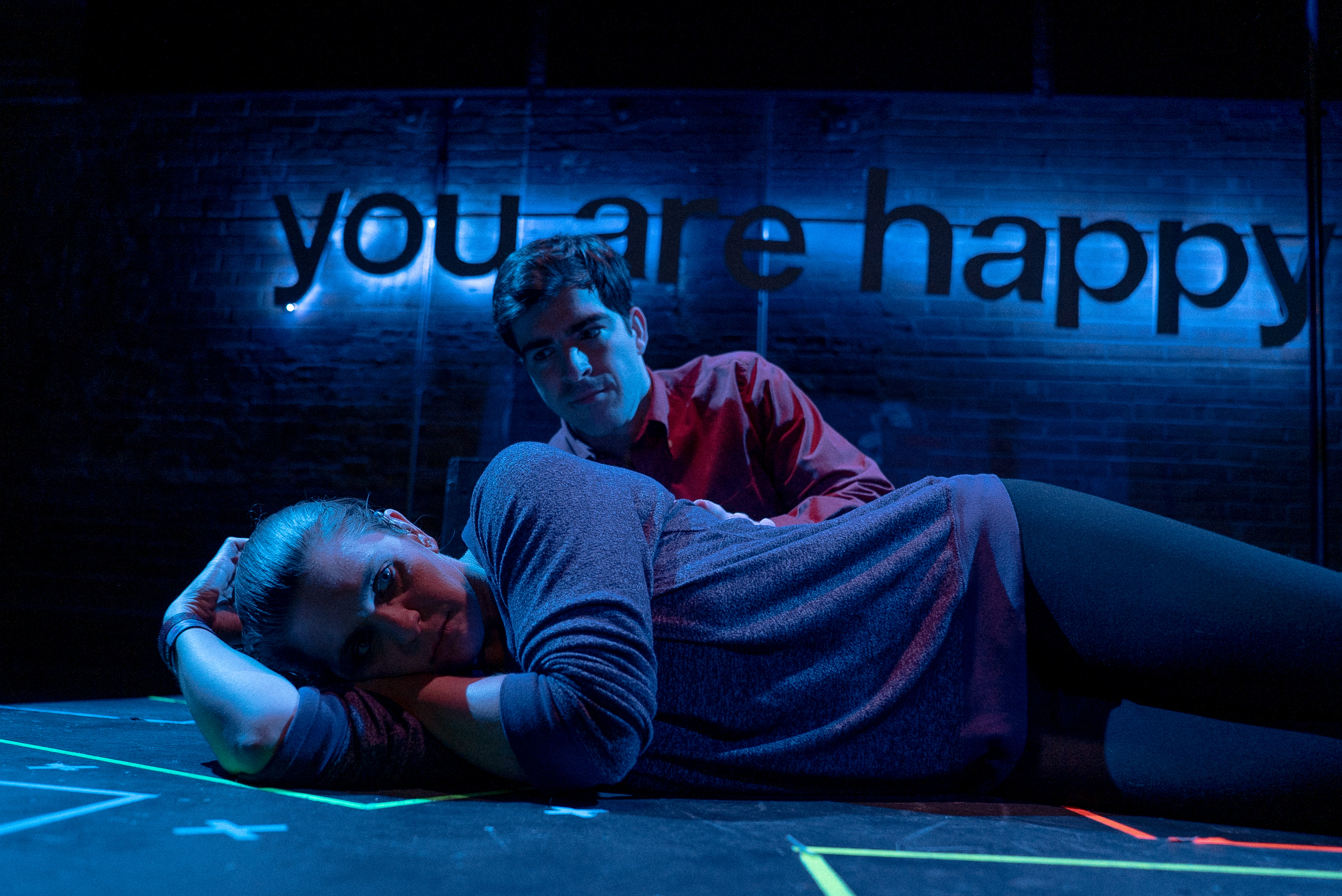 The original title for Rébecca Déraspe’s play was “Deux ans dans votre vie”: two years in your life. As translated by Leanna Brodie, the title becomes “You Are Happy,” substantially more loaded with aspiration and, as happens in this particular piece, irony. Translation into American Sign Language by Brendan Connolly, Michelle Mary Schaefer, and Mary Kate Ashe for Red Theater Chicago’s production further dims the view with a thick patina of downright bitterness. If you were looking for a feel-good play about a man who survives a suicide attempt, this is not it. But for a frigid comment on the disappointments of modern relationships, Red Theater’s got your back. Directed by Aaron Sawyer and Mary Kate Ashe, the use of sign language and spoken words results in a double production, which exposes the darkest side of this play.

“You Are Happy” begins with Jeremy (Brendan Connolly, voiced by Bowie Foote) trying to hang himself in the closet of his sister Bridget (Emily Turner, voiced by Elana Weiner-Kaplow). The rope gives him a splinter, which puts him off. It’s just as he’s struggling to open a plastic packet of razors for an equally shifty plan B that Bridget enters. Unlike her pathetic brother, who can’t even get his death right, Bridget is an executive in all regards, from her blazer and heels to her plan for her brother’s rehabilitation, which naturally combines work and pleasure. As a manager for a razor company, she goes straight for the jugular, brutally exploiting one woman’s physical insecurities to force her (Chloe, played by Michelle Mary Schaefer and voiced by Sarah JK Shoemaker) to date Jeremy. This is also, efficiently, market research.

Bridget’s plan works because Chloe and Jeremy are slaves to convention. Chloe starts off a half-hearted champion to singleton life but loses her commitment at the first mention of a bikini shave. Jeremy is more troubling, eager to play the romantic hero and just as eager to dominate a woman, any woman. But having the play played twice, with one person speaking while the other signs, makes the imagery of ventriloquist and puppet pop in this production in a way that highlights the message that romantic relationships are social manipulation. Bridget is the only character who both speaks and signs; even her voice is just an accessory. Turner tosses Weiner-Kaplow around accordingly. Disturbing. (Irene Hsiao)