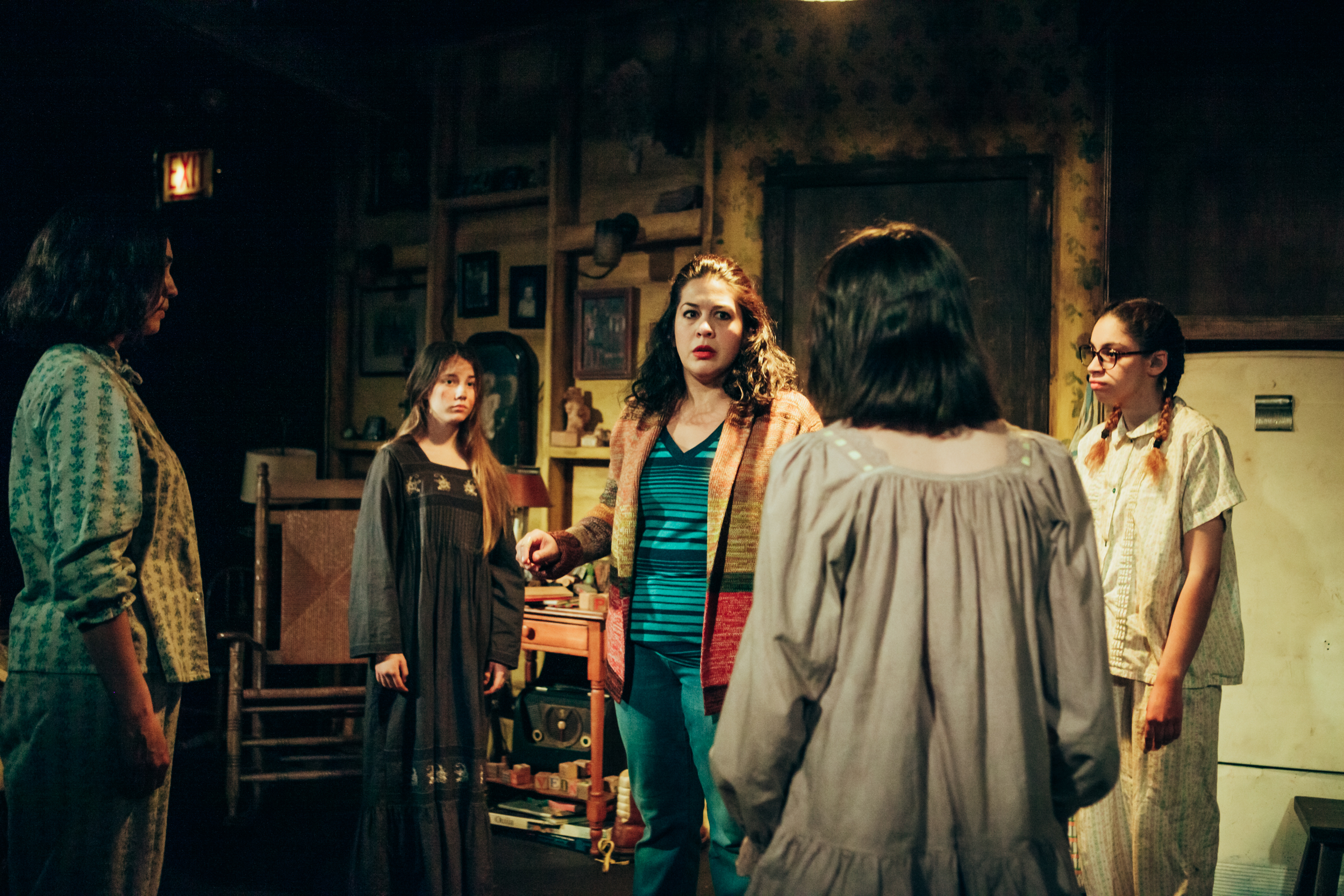 Not to worry: Malachai and the other children of the corn aren’t here. But you never know who might be lurking in a darkened corner in “Grey House.” It could be Marlow or Squirrel or even A1656. The inhabitants of the house never stay in their rooms for long.

“Grey House,” the latest world premiere at A Red Orchid Theatre by ensemble member Levi Holloway, makes your average cinematic Stephen King adaptation look like a cakewalk. This twisty tale of stranded travelers Max (Sadieh Rifai) and Henry (Travis A. Knight) and a mountainous house involves the kind of spooky storytelling a true fan of the genre craves. One that lets your mind wander long enough to forget what could be laying in wait.

Did I mention you might want to brush up on your Morse code? Trust.

While on the way out of the theater, I overheard many folks speculating about the mysterious play’s title. It seems all too clear to me. In a world where it can be so easy to categorize things into black or white, there are some things that simply live in the gray area. Could there be a more perfect name for said gray area than simply “Grey House”? Especially on a snow-covered mountain, even the gray sticks out like a sore thumb. Or, in Henry’s case, a sore ankle.

Also shoutout to Holloway for making American Sign Language a major part of this play.

The stars of the show are undeniably the young people of this terrifying little cabin. Sarah Cartwright as Marlow, Haley Bolithon as A1656, Kayla Casiano as Bernie and Autumn Hlava as Squirrel are delightful. Well, as delightful as characters in a nightmarish existence can be. This quartet of eerily gifted musicians and magic conjurers doesn’t fail to bring a smile to even the stingiest of faces.

Above everything else what is so fascinating about Holloway’s play is its attention to detail. One could see this play a dozen times and not catch every allusion or Easter egg. My personal favorite is that the ringleader of the misfit band is Marlow. Although spelled differently, it can’t be mere coincidence that this young woman with a penchant for pentagrams shares a name with the man who wrote “Doctor Faustus.” I wonder what Mephistophilis would think of this play.

What makes “Grey House” unnerving is the fact that it isn’t really scary, especially compared to the lengths and means of present-day horror films. It doesn’t have to be scary. The gray area itself is scary. The nether in which we live between our past and future, our sins and good deeds, and all that comes with those difficult dichotomies is where the fright lives.

I would end this by saying I hope someone makes “Grey House” into a movie, but according to Holloway’s biography in the program it’s already been optioned. So instead I’ll say this: I can’t wait for “Grey House” to become the horror movie that (like “Get Out” or “A Quiet Place”) proves that a story doesn’t need tacky tricks to be unnerving. (Amanda Finn)