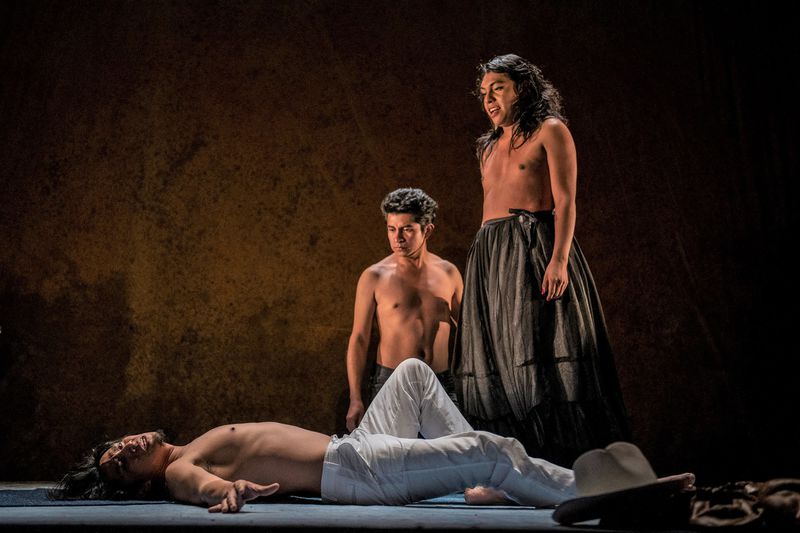 We are watching theater on stolen land. We’re giving a standing ovation, gathering our belongings and exiting a building on stolen land. We’re commuting back home—by car, bus, train—and ruminating on our evening spent on stolen land. We have just seen Makuyeika Colectivo Teatral’s shatteringly beautiful “Andares,” created by Hector Flores Komatsu, a part of Destinos, the third Chicago International Latino Theater Festival, and produced at Chicago Shakespeare Theater, which explores the lives of indigenous communities in Mexico, all the while reaping the benefits of a nation that has abused and tortured its own indigenous communities.

I am writing this review—and perhaps, you are reading it—on the traditional homelands of the Council of Three Fires: the Odawa, Ojibwe, and Potawatomi nations, alongside many other tribes who called this land home. Chicago is home to thousands of people from indigenous communities and they are all but unacknowledged in our city’s mainstream artistic output. It might do some good then to see “Andares,” in its all-too-short run at Chicago Shakes, as a means of bringing yourself into a space where your view of how we honor or dishonor indigenous peoples will be brought into the here and now.

Performed by three inspired storytellers (Josué Maychi, Domingo Mijangos and Lupe de la Cruz) and one musician (Raymundo Pavon Lozano, whose voice will cut through your heart), “Andares” is an act of shared storytelling examining the Wixarika, the Maya, the Totzil, the Muxe and the Jarocho, all cultures with deep roots in Mexican culture. We hear stories of a young boy working in the fields with his farmer, yearning to hunt so he can grow. A young Muxe, a third gender in the Zapotec culture, struggling to find love in a culture that forbids it. We hear the creation myth on three separate occasions, with humanity created through mud, wood and maize, all in pursuit of crafting something beautiful to be brought into a world that will ultimately destroy itself. We are talked to and talked with by the performers. This must be the case: a community is being built in this room so we can share complicity in how these stories shape our own world.

“Andares” is born in joy, lives in anger, and ends in hope. Our current political figureheads—in Mexico and our own country—are placed on the chopping block for their continued neglect of those whose land was taken from them. Lozano exclaims to us “Pain can be sung too, if one is unable to cry.” But the power of “Andares” comes not just from the pain of its song but from knowing that no matter the pain, the song will still be sung. We are on stolen land, and while we collectively refuse to acknowledge this land’s history, those we’ve stolen from will not let us forget. And they themselves will not be forgotten. (Ben Kaye)