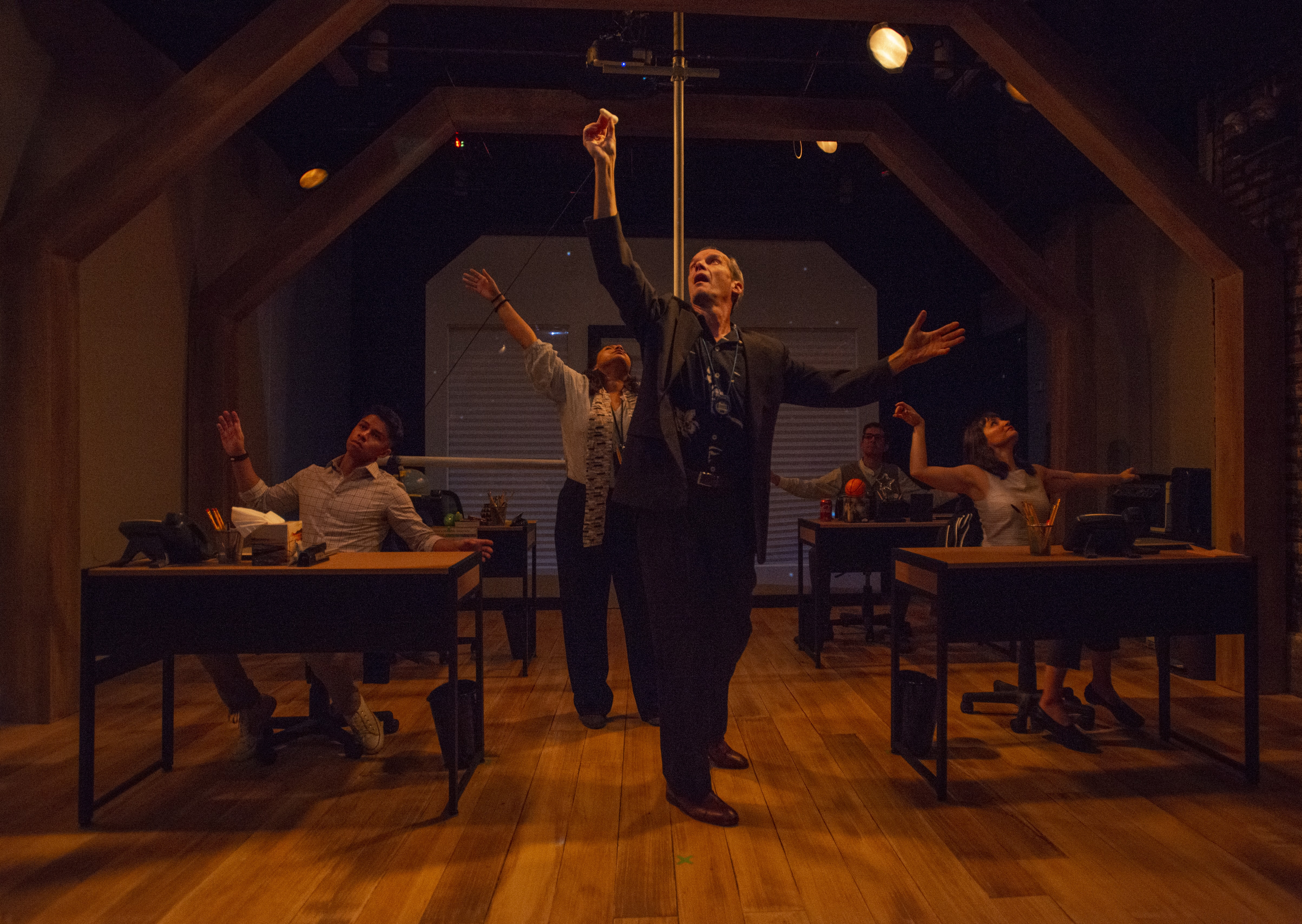 The cast of “Laura and the Sea”/Photo: Michael Brosilow

No one says a word in Kate Tarker’s “Laura and the Sea,” in its world premiere at Rivendell Theatre Ensemble. Well, okay, they do say words but only via email or phone call or blog post or blog post disguised as flashback. Outside of technological means, the travel agents at the center of the show, milling about their cramped office day-to-day, provide us with no spoken words, just pantomime and physical action. Sometimes silence can speak volumes.

Our officemates are spending their days trying to memorialize their dearly departed Laura (Tara Mallen). Yes, Laura—of “Laura and the Sea” fame—has died. We get tiny breadcrumbs throughout of what eventually led to her demise, but the sadness and beauty of it all is that ultimately we never learn the truth of why Laura was as sad as she was or why she died the way she did. Life doesn’t have easy answers and neither does Tarker. Even sadder: Laura, as she exists in the play, isn’t really Laura, she’s just a jumbled composite of the memories of her fellow employees at her travel agency. We only know Laura through the minds of people who didn’t really know her at all.

Annie (Adithi Chandrashekar), the new general manager, wants to believe Laura was cared for, though she couldn’t even tell you Laura’s favorite movie. Joe (Jordan Arredondo) thinks he loves Laura, although love might mean something very different to him. Stan (Alex Gillmor) can’t find a meaningful connection with anyone, let alone Laura. Mary (Paula Ramirez) doesn’t see the point in any of this, especially when she has to deal with her own problems. And Jack (Mark Ulrich), the CEO, has more guilt regarding Laura than he’s letting on. Everyone has their own sadness they need to address but Tarker’s play doesn’t give us that luxury. They must suffer in silence.

Director Devon de Mayo finds brilliance in juggling the comic and tragic potential of such a situation: the mundanity of office life, the dread of losing a colleague, the absolute awkward interactions that anyone in an office setting will recognize all too well. The entire cast keeps things moving at an engaging pace, navigating the often treacherous and turbulent depths that the play dares to plumb. It’s a balancing act worth the price of admission. “Laura and the Sea” is that rare whimsical show that wears its heart on its sleeve. Those allergic to overt sentimentality and earnest metaphor may find themselves at a loss here, even if these are qualities that contemporary American playwriting could use extra doses of these days. There’s something powerful about using comedy to access sadness. Tarker and de Mayo seem to understand that better than anyone.

One of the more on-the-nose conversations of the piece comes into play with Jack’s desire to have their agency promote interplanetary trips to Mars, whereas Laura’s final pitch to the company involves helping people see their current surroundings in a new light. We’re left with the question: do we save and reevaluate our own world or abandon our surroundings for greener pastures? And an even sadder realization: do we even know what—or who—we’re saving? (Ben Kaye)