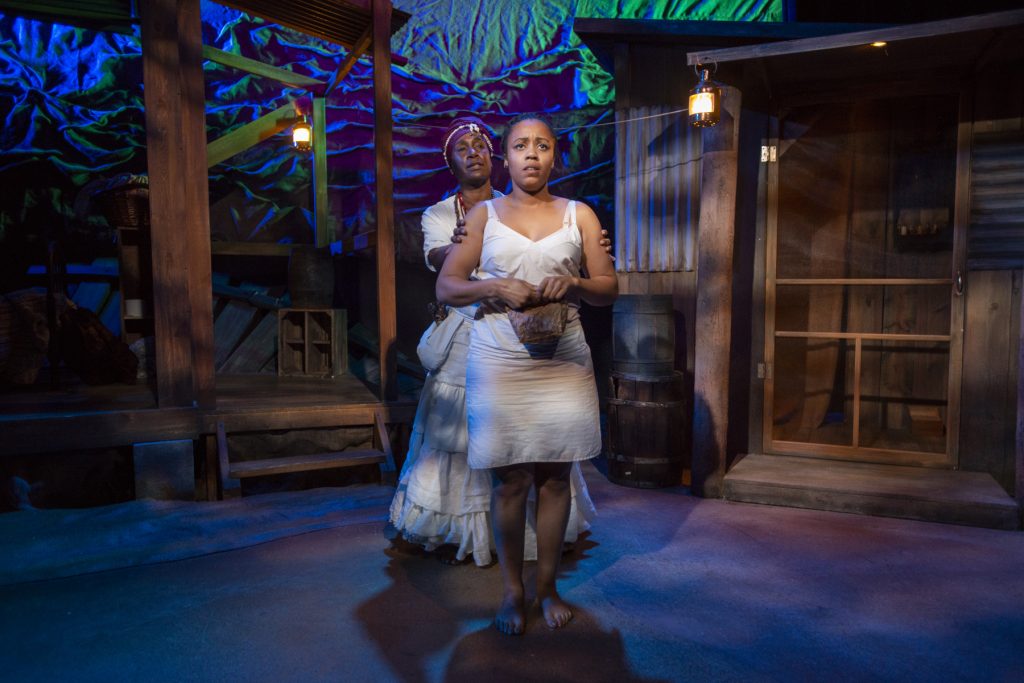 Between two shacks in Memphis is a clothesline, a lifeline between one woman and another. It’s nearly centerstage in Raven Theatre’s production of “Hoodoo Love.” A simple clothesline that connects the home of a preacher’s daughter, Toulou, and a Hoodoo practitioner, Candylady. The clothesline shouldn’t feel emblematic and yet it does. In this story of love, music and magic, masterfully directed by Wardell Julius Clark, nothing feels simple. And in the case of love and magic, things rarely are.

Complexity is as it should be in a story mixing love and magic. Because the deals we make in this life are rarely as simple as they appear. And if you don’t look closely enough, you’ll miss what you’re truly trading off. Toulou’s heart belongs to the Ace of Spades (Matthew James Elam). Ace’s heart belongs to riding the rails to his next music gig. The heart of Jib (Christopher Wayland Jones) “belongs” to the church. And Candylady? Well, Candylady will tell you all about her heart’s adventures with her mojo bag of memories of slavery and husbands past. What Katori Hall’s brilliant play teaches us is that love is a fickle thing with even heartier consequences. Even so, it begs the question, “What would you give for the love you always dreamed of?”

While there is literal magic on stage in scenes deserving their own rounds of applause, palpable magic is felt between Martasia Jones and Shariba Rivers as Toulou and Candylady, respectively. For all the Hoodoo inspired love trades in the world there couldn’t be a more perfect pairing than these two in these roles. Jones gives Toulou her melody. Her soulful voice combined with devastating pathos brings life to the young protagonist. Meanwhile, Rivers brings much needed levity to the stage with her mysterious Candylady.

A disembodied railroad track lurks behind Toulou’s shack, an ever present reminder of her ever roaming man and the path to her own musical future. Sydney Lynne Thomas’ set design perfectly encapsulates the myriad of troubles holding down the foursome. Everywhere you look there is something to take in. Like the play itself, Thomas’ design is simple only upon first glance.

For card sharks Ace and Jib, though they chance their luck in the cards, their dismissal of Candylady’s rootwork is an irony too good to ignore. But it’s in Candylady’s presence that we’re reminded of the heritage of Hoodoo. Just like white folks appropriated (and continue to appropriate) black music and culture, there is an ever-growing appropriation of the culture of Hoodoo. Candylady’s intermittent reminiscences of her days as a slave are an ever-present reminder that Hoodoo is largely a practice borne out of African religions coming together in the early 1800s. It is literally the marriage of cultures. Hoodoo and love go together so naturally it seems a shame that people like Jib are so quick to scoff.

As difficult as some of the scenes in this play are to watch, because the cruelty of men is often too difficult to bear, this show is remarkable. That isn’t even close to the amount of praise this show deserves. It’s spellbinding. It’s enchanting. It’s insert-another-magic-cliché here. You won’t need the help of a mojo bag to fall in love with this show. (Amanda Finn)