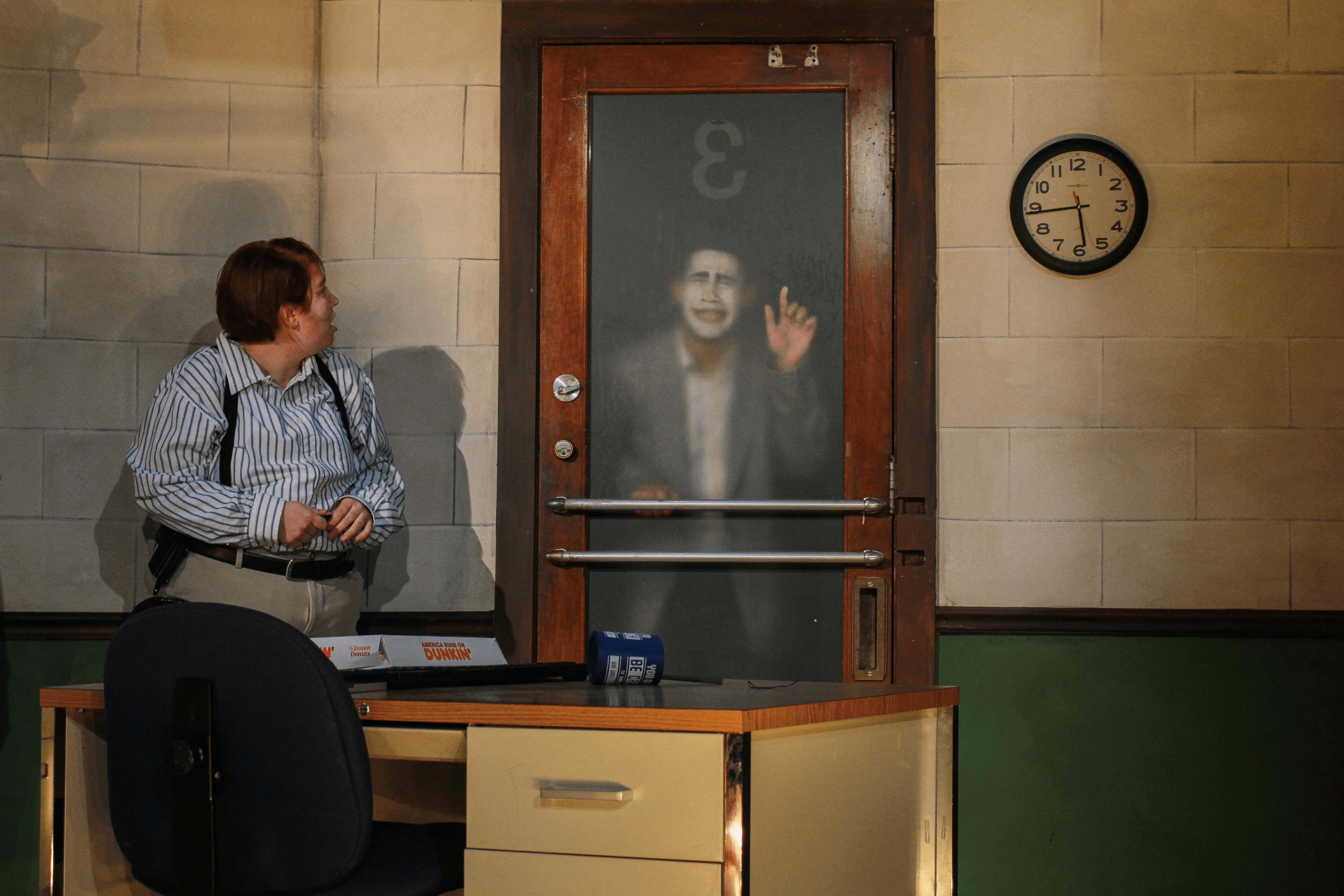 The Conspirators’ “Accidental Death of a Black Motorist” isn’t a perfect play—it’s too long and occasionally labored—but it is a necessary play for our time. Accurately subtitled “A messy play about dirty cops,” it’s a reimagining of Italian playwright Dario Fo’s 1970 political farce “Accidental Death of an Anarchist,” transferred to a present-day Chicago police station. Combining Fo’s comic plotting with their own clowning, cartoonish style, the troupe, under Wm. Bullion’s loose but propulsive direction, delivers as fearlessly funny a show as I have seen on a local stage in quite some time. Beneath adaptor Sid Feldman’s endless gags and comic riffs, there’s a deep and deadly serious examination of the racist assumptions and protective code of silence that make police brutality a chronic wound in Chicago’s soul.

Our Virgil in this Dantean trip through the city’s infernal side is called simply the Actor, a wise fool type, recently released or escaped from a mental hospital, who is arrested for impersonating a psychiatrist. A semi-crazed lord of misrule, the Actor soon has the none-too-swift cops who attempt to question him jumping through hoops. His exasperated interrogators soon release him, but he sneaks back into the station house, determined to play an even better role: that of a judge’s aide, cross-examining the police about what really happened to an African-American motorist taken in on trivial charges who died under mysterious, Jeffrey Epstein-like circumstances, supposedly falling or jumping out of the window in this very office.

The plot is a classic mystery story, but viewers could be forgiven for not noticing its conventionality. The Actor builds his case against the killer cops theatrically, creating a counter-drama to reveal the officers’ own narrative of lies. Persuading the boys in blue that he’s on their side, the Actor leads them on a merry chase toward the ugly truth of police violence and cover-up. Some of the funnier moments involve the Actor as a latter-day Cecil B. DeMille, megaphone in hand, directing the police in a mock-playful version of their third-degree encounter with the innocent motorist. The first act ends in a high-energy dance number to the music of Marvin Gaye, as the cops try awkwardly and desperately to demonstrate their non-racist bona fides.

The comic mood comes crashing down soon after, though, when the Actor gives a blood-curdling imitation of the groans and screams emanating from the South Side police station presided over by the notorious Jon Burge, the dark presence that haunts this play. The depiction onstage of the wholesale use of torture by Burge and his “midnight crew” silences all laughter, abruptly and compellingly reminding viewers that the historical relationship of the CPD and the African-American community is less a comedy than a real-life horror show.

The second half of this overstretched play flags, as points already made are repeated and superfluous new characters and pseudo-characters are introduced. Feldman is a naturally inventive and ingenious writer, but what the script needs is a ruthless editor with a sharp red pencil to keep it focused and within bounds. Cabaret is not grand opera, and two-and-a-half hours of mostly flat characters emoting hysterically is an hour too much. And there are lapses in storytelling, meaning that after all the hubbub, the chronology of the motorist’s last few hours still isn’t completely clear.

Anthony Hinderman, a young actor from Texas with a very promising future, is a revelation in the exhausting role of the Actor, conveying the character’s manic, anarchic energy as well as his Holmesian deductive powers and passion for truth and justice. This gleefully nutso protagonist is well matched by the antic villainies of Nicole Frydman as the chief of police, whose exaggerated tough-guy accent is just this side of gibberish, and Nathaniel Fishburn as Detective Bekstra, who’s interested only in covering his deeply compromised derriere. These three are joined by Kate Booth, Gunner Bradley and Madison Boan as fellow officers and Ali Janes as a TV reporter, all equally skilled in The Conspirators/ trademark style of frontal, head-jerking, pause-heavy delivery, orchestrated by Sarah Scanlon’s skillful rim-tapping percussion background (Scanlon, who also provides highly comical trick voices, alternates with Tom Jasek on drums).

“Accidental Death of a Black Motorist” may be too much of a good thing, but at heart it’s a very good thing: a high-voltage burst of memory and protest in a city that has always kept its dirty laundry well hidden. Acting, movement, sound, costumes, makeup, lighting and video come together here in a unique and mind-blowing experience for even the most blasé theatergoer. One of the play’s running gags involves the obscure word “raptus,” literally meaning “seizure” or “rapture,” which is invoked by the police as a magic formula to explain the motorist’s supposed accident or suicide. “Accidental Death” is a theatrical raptus, one that leads to awareness rather than despair. (Hugh Iglarsh)