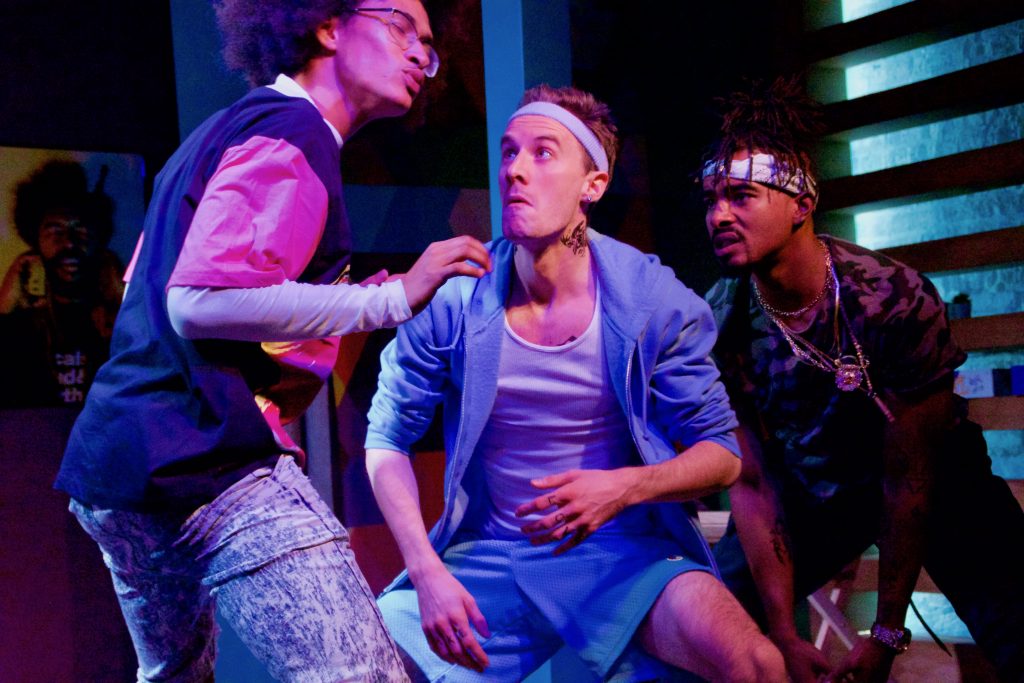 “P.Y.G. or The Mis-Edumacation of Dorian Belle,” in its Midwest premiere at the inimitable, unmistakable, and oh-so-admirable Jackalope Theatre, announces its ambition before it even begins. It’s right there in the title: an acronym that alludes to Shaw’s “Pygmalion,” a nod to Oscar Wilde and, of course, an homage to Ms. Lauryn Hill. For a breakneck one-hundred minutes, Tearrance Arvelle Chisholm’s play, directed by Lili-Anne Brown at what may be the most ideal confluence of her myriad talents, goes and goes hard. It contains perhaps the highest density of visual and verbal humor this side of all-out farce, reflecting, in its high-octane RPMs, the overwhelming sense of crisis and conflict at the heart of American discourse today. Rare is it to find such a stimulating blend of empathy and entertainment under one roof, but through a combination of sheer determination and a nurturing environment, this play excels in nearly every way, tackling questions of authenticity and accountability with ample wit and ferocious generosity.

“P.Y.G.” doesn’t pull punches, but it does take careful stock of where those punches land. In a moment early on, Blacky Blackerson (a tireless and ascendant Eric Gerard)—or “Black,” if you’re into the whole brevity thing—asks a pointed question of the Canadian pop sensation Dorian Belle (Garrett Young), a young man with all the swagger of a Utah Jazz dance cam segment: namely, what made him, a white boy, fall in love with hip-hop in the first place? In a show that contains much satire and a thorough roasting and ribbing of racial contradictions and paradoxes, Dorian’s answer is mesmerizing in its honesty. He describes, in detail, discovering “the beat” in his youth, chasing it around the globe, finding its variants and idiosyncrasies, unable to get it out of his head, even if he wanted to. He compares it first to love and later to truth. As a thirtysomething white guy who grew up in New Hampshire and came of age listening to Kanye West, Jay-Z and Outkast, black artists whose distinction of acceptance and popularity with white listeners undoubtedly stirred (and likely continues to stir) in them the kinds of quandaries and complications this play explores, my question would be: how could we not? But love is not necessarily the issue. Neither is admiration or appreciation. Possession is the problem. White people don’t just love black music and black culture. We want it for ourselves. We want it so badly we’re willing to kill for it. The only thing black we don’t love, evidently, is black life. 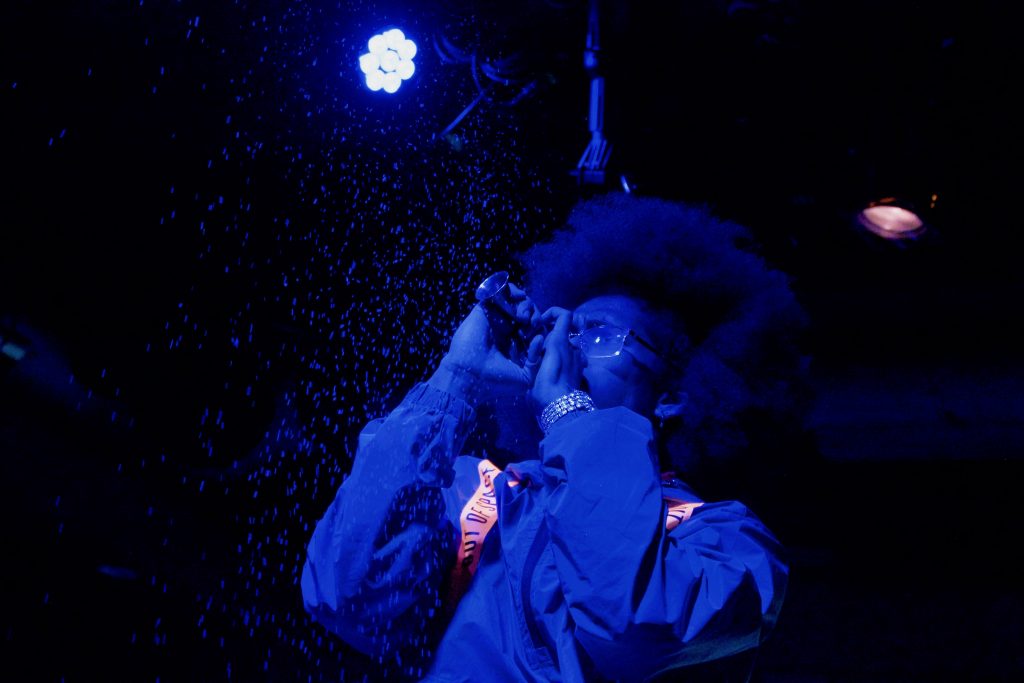 These are the ideas and thoughts you should prepare (or, alternatively, not prepare at all) to confront in “P.Y.G.” In fairness, you should also be ready to laugh (a lot), grimace, groan, suck your teeth, inhale and exhale audibly, and otherwise just express your feelings as you feel them. As a white person, I say from experience that we are indoctrinated into the cult of silence as civility at a tender age and we often take those practices to the grave. And not always our own grave, if you catch my meaning. Of the several concurrent slow evolutions happening in the theater right now, at least one is happening in the audience. All that to say: take the monster and out of demonstrative and enjoy yourself, for Chrissake. Not that you’ll have a hard time doing so. The dynamic duo of Gerard and Tevion Devin Lanier (as Alexand Da Great, the Andre 3000 to Black’s Big Boi, cerebral and sensitive, with poetry pouring out of him at all times) are just that: dynamic. Brown’s choreographic direction, in conjunction with sound and music by Aaron Stephenson, means that their bodies, like their ideas on race and responsibility, are in constant motion. To observe Dorian observe them is to watch ourselves watch the art as it happens. It’s the kind of magic that makes me believe in this art form.

The meta framing device of a reality show (with its almost-heartwarming send-up of MTV and a pre-internet era of toothless televised trash we were too naive to appreciate) neatly reflects our modern state of constant surveillance: the part that we opt into via social media and the more troubling invasions of privacy that you can read all about in certain corners of the VPN-protected Twitterverse. The frame also serves to confront the performative potential in acts of appropriation and activism alike. A series of cheeky fake commercials serve a clever interstitial function and are aimed at various high-profile targets including white privilege (“White Man’s Shoes: Getting You Out Of Work Since 1865”) and the legitimizing power of white bodies (“White-Coy”), featuring cameos from a litany of local actors. They are a touch clunky in execution, especially in contrast to the proceedings of the play; one is very clearly shot in the lobby of the theater and overall the dialog can be spotty and hard to hear. No shame in it, but Jackalope’s technical ambitions in the fields of projection and video, advanced as they are, and their subsequent integration into the theatrical arts have not yet caught up to their well-cultivated savvy in nearly every other area. 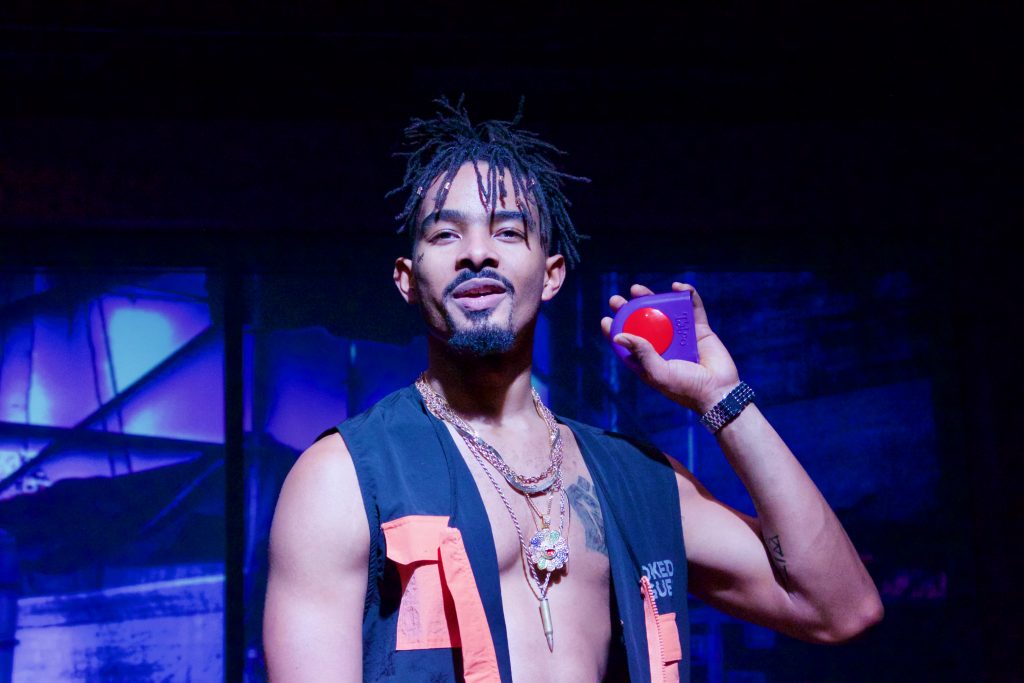 While there’s no shortage of targets in Chisholm’s play, the work is most compelling when breaking the rules its characters set down. The hostility with which Black initially approaches Dorian is endlessly understandable: he is a representative of a centuries long and still-ongoing conspiracy of theft and murder that have left black people the world over dispossessed, disenfranchised and dead, often in that order. Yet Dorian is eventually able to win him over with his earnest and often disarming affection for hip-hop. In the process, Black discovers the pleasures of new kinds of greens (arugula serves as an important metaphor) and other “white shit,” shorthand for a variety of racial constructions, several of which are explored in this play, built from both inside and outside but which serve to benefit whiteness exclusively. At one point, Black articulates the pain of having his world expanded, getting a taste of things that other members of his community never will. That this scene takes place as he and Dorian cruise up a mountain on a ski lift, a challenge to several pervasive stereotypes simultaneously, represents just one example of the genuinely exhilarating cultural convergences this play and its production have in spades.

While Black embraces a leisure of whiteness, Alexand, the more politically committed of the duo, begins to lose his center, which he maintains through an exhausting emotional gyroscopy. He becomes overwhelmed by the thought of what he and Black might be losing in terms of soul (to say nothing of street credibility) by giving so much to Dorian. Along the way, questions of allyship and cultural exchange are, well, exchanged. There are many opportunities in this play for white folks to expand their contemporary black cultural reference points beyond “black-ish,” Ta-Nehisi Coates and Kendrick Lamar (don’t be mad: it takes one to know one), and this play clearly anticipates white audiences, as suggested by conversations around the proprietary use of the N-word and fourth-wall-acknowledging asides about “mixed company.” But there are also many moments of black intimacy, gratifying and meaningful to witness as an emotionally astute white person capable of recognizing the relative rarity of such moments in any medium, but whose value for black audiences I am not qualified or able to gauge. Like a woke Dorian might point out: it’s not for me to say. But I see it. And my hope is to leverage my privilege to increase the likelihood that others will see it as well. 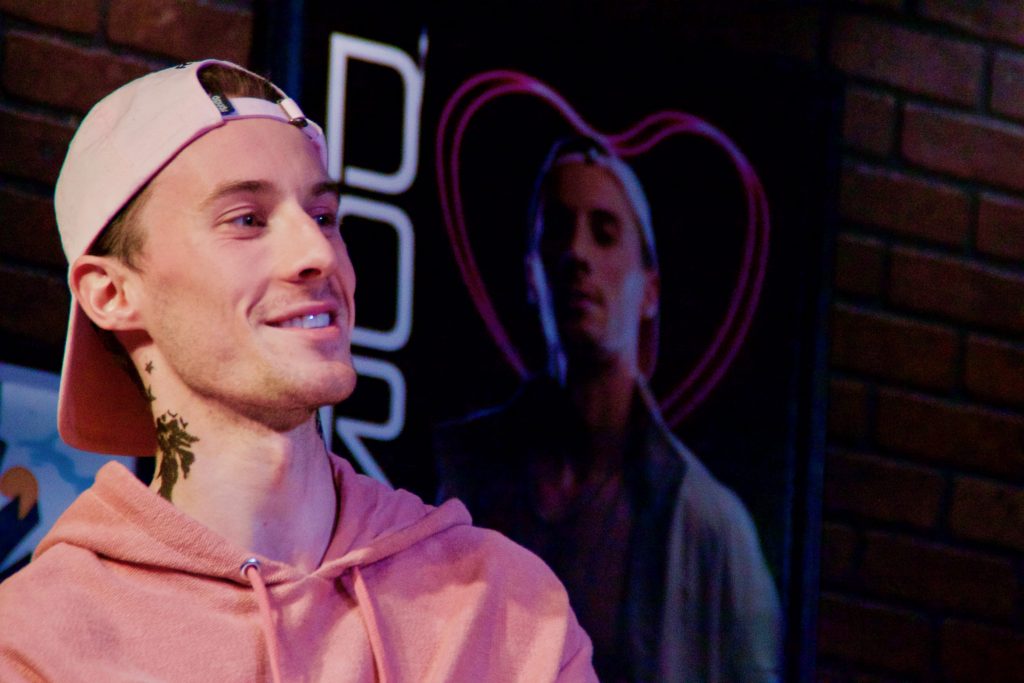 “P.Y.G.” is not a play for one group of people or another though it addresses the things that separate us into categories in the first place, not the least of which is a consumerist media landscape that flattens nuance into the pulp of commerce, less a unifying force than an opportunist vermin. Toward the end of the play, Black expresses his recently shaken doubt that white white people (which he defines as those who are unable to see themselves anywhere other than the center) and black black people (crushingly contrasted as those who aren’t even sure where the center is) can ever truly be friends. Not collaborators or acquaintances but friends. But his doubt is well-founded. Dorian invariably disappoints, in the exact way that countless white artists who appropriate black culture have done for hundreds of years and continue to do, seldom with apology or even acknowledgement (as of this writing Post Malone, generally agreed to be a sentient Pringle, has four songs on the Billboard Top 100, including one featuring Travis Scott and, wait for it, Ozzy Osbourne, because god is dead, apparently).

The real difference comes in the play’s finale, in its possibility for reconciliation, not between races (though the black men in this play understand too well how they are perceived as representatives of their entire culture), but between individuals. It sounds cheesy precisely because it is cheesy. But in taking that risk, in taking all the risks this play does, “P.Y.G.” represents a way forward. And that, as they say, is worth the price of admission. (Kevin Greene)