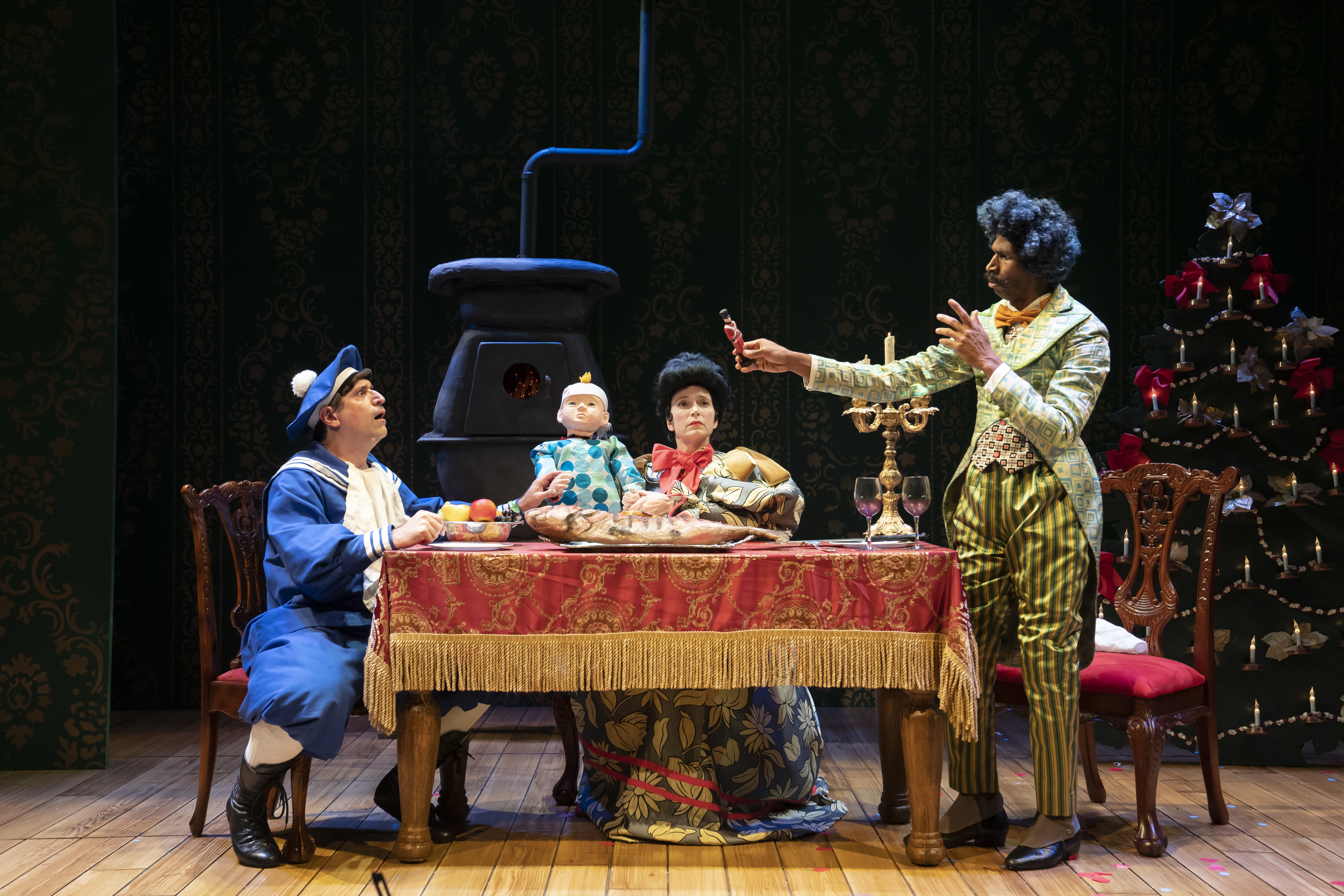 The clock strikes and they come in like dolls, beetling about a jewel box of a stage, pulling open tiny doors to tiny compartments with tiny pictures: a soldier, a ballerina, a fish, a flame. A mysterious figure (Anthony Irons) with a snow-white deer’s head paces by. A punctilious nursemaid (Joe Dempsey) bustles through, feathering up imaginary particles of dust. A wide-eyed infant grasps for a toy: a tin soldier (Alex Stein), absent one leg.

Directed by Mary Zimmerman, Lookingglass Theatre Company’s “The Steadfast Tin Soldier” is a beauty, sumptuous and intimate all at once. Told almost entirely through movement and marvelous interludes of puppetry, the Hans Christian Andersen fairy tale about the love between a tin soldier and a paper ballerina comes to life in a brilliant variety of scenes that unfold over a single delightful hour.

As a production, this is dazzling work which combines technical mastery with genuine heart on every level, from the costumes (Ana Kuzmanic) and sets (Todd Rosenthal) to the puppets (Chicago Puppet Studio) and music (composed by Andre Pluess and Amanda Dehnert, directed by Leandro López Várady) and a masterful cast (including Kasey Foster as Ballerina and John Gregorio as Rat) that embodies the essence of comedic timing, wit and charisma. The play on scale that gives the audience an Alice-in-Wonderland-eye-view of the action is pure magic. The bittersweet ending reflects the melancholy and hope of the holiday season for children and adults alike.

And yet, consciously or not, a disturbing detail lurks within this otherwise picture-perfect play, in which many characters are mischievous but only one is a villain, the Goblin, who pops out of a Jack-in-the-box, terrorizes the Ballerina, and threatens the Soldier. In this production, that role happens to be played (and played well) by the only actor of color in the cast. (To my horror, this may have a textual basis.) There’s a scene in the first act of “The Nutcracker,” a ballet broadly called out for its racism, wherein gift boxes open to reveal living dolls: a ballerina, a harlequin, and a third doll, sometimes a Moor (for instance, in Baryshnikov’s “Nutcracker” for ABT, a Moor literally in blackface). The ballerina and the harlequin enact a sweet romance; the third doll expresses menace and masculinity, altogether almost the plot of the “The Steadfast Tin Soldier” in miniature. Particularly with the baby of the house represented here in the form of a blond-and-blue-eyed puppet, one wonders if something can be done to avoid perpetuating a bias one hopes to have outgrown*. (Irene Hsiao)

*I hesitate to suggest that George Balanchine of all people has any answers, but note that in the version he choreographed for NYCB, you see a soldier instead at 16:55.