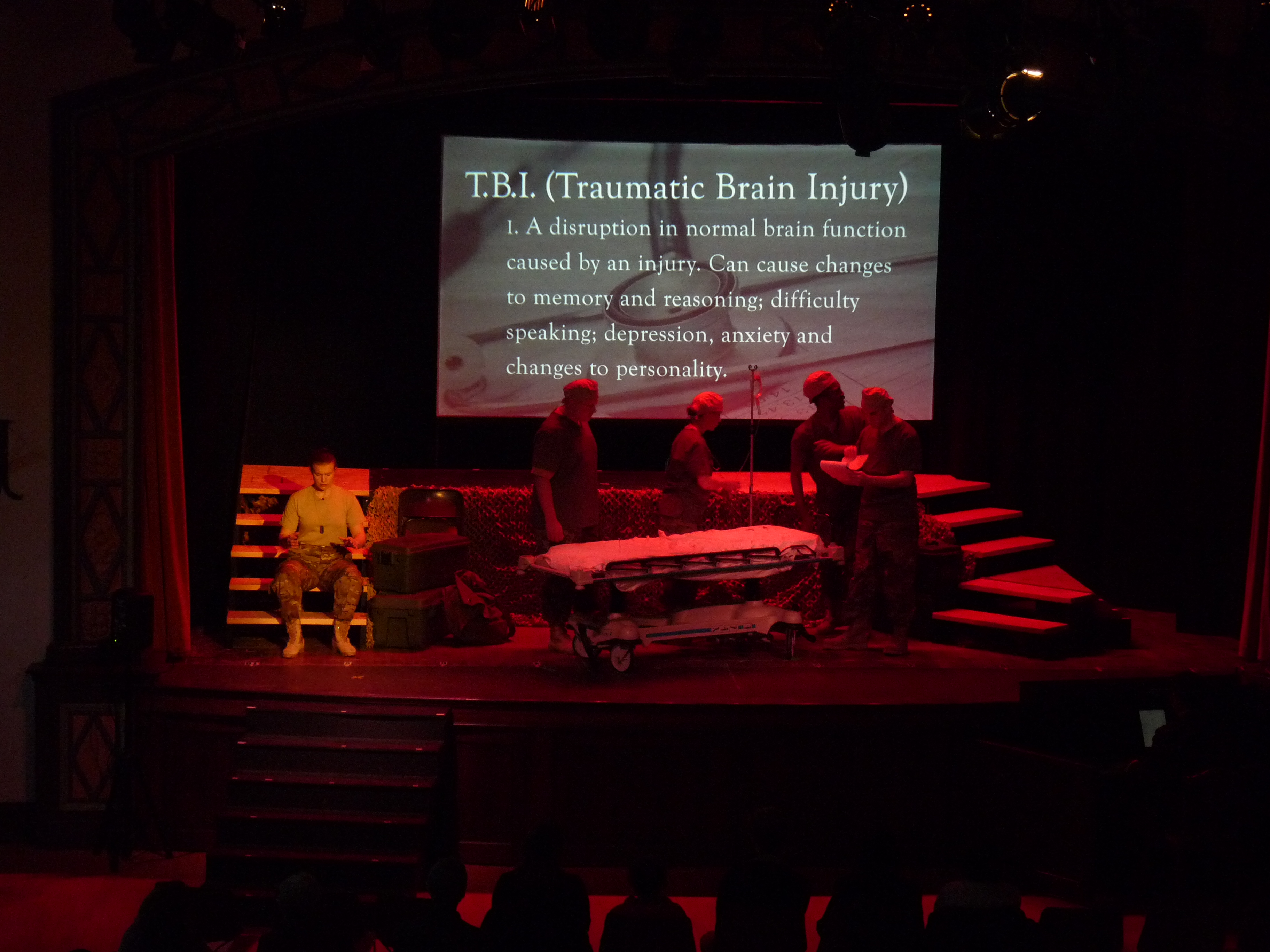 Mary Lutz-Govertsen with the cast

Something deeply embedded in human nature leads us into war: someone has something we want and won’t give it to us. Someone feels differently than we do about money, politics or religion. Someone picks on somebody not their own size. A typical reaction is calculated, strategic violence, in an effort to restore what the aggressor feels is appropriate status quo. The quiet, effective voice of Diplomacy is far too seldom deployed. History teaches us that this has been going on as long as there were enough humans to pick fights with one another. Today’s headlines tell us that humans are very poor students.

But as we celebrate Veteran’s Day, the arguments over these escalated contentions need to take a step back as we focus on the souls that walked the walk while many of us were merely talking. We must never forget the humans who trained vigorously, took up arms, and fought for the cause of the majority so they could stay home, safe and warm and distanced from the melee and the suffering. We have the responsibility and the privilege to honor those brave soldiers who never came home, and those brave soldiers who came home profoundly changed in body, heart and mind.

Petite Opera Productions’ mounting of “The Falling and The Rising” is a fine example of the work a Chicago storefront opera company can offer, and their timing is impeccable. Composer Zach Redler and librettist Jerre Dye have created an exploration of feelings, an opera that sits easily in the realm of contemporary, lyric theater, that land of Sondheim and Guettel, of Menotti and Mazzoli. If opera is thought to be a grand thing, with love and death as the chief players, this piece absolutely qualifies. If contemporary musical theater crystalizes stories in a more intimate way for the palate of a larger constituency, this piece delivers that immediacy. Director Cathy Dunn, using her considerable stagecraft and the marvelous projections provided by Opera Memphis and Jeffrey Skender, has tailored the production to feel like a television special of great worth and importance, a movie presented in your living room, blessedly without commercial interruption.

U.S. Staff Sergeant Ben Hilgert, a member of the Soldiers’ Chorus with the U.S. Army Field Band, conceived a musical event that would bring the audience inside a soldier’s experience, using interviews with returning soldiers at the Walter Reed National Military Medical Center, with Redler and Dye in attendance. Championed by the Army and underwritten by Texas Christian University and opera companies including Seattle Opera, San Diego Opera, Arizona Opera and Opera Memphis, the piece follows the journey of a female hero known only as “Soldier,” who, placed in a medically induced coma due to overwhelming brain injuries suffered in an air strike, wanders through a ghostly labyrinth of military figures living their stories, told in real time. She cannot help them but she leads us to them, acting as guide and buffer.

Soprano Mary Lutz-Goversten has the large task of carrying the show and the audience on her back, and her performance is mesmerizing (Govertsen’s role is performed by Carla Janzen at some performances). Her theatrical gravitas lets the audience meet the injured and experience their damaged worlds with connection but not interruption. Her lyric-coloratura voice has never been better, the middle voice creamy and pliant, the sudden high notes and floating obbligatos required by Redler’s exciting writing executed without an obvious physical preparation, only an emotional continuance. The show opens with our Soldier Skyping with her thirteen-year-old daughter the night before her birthday and just before sustaining the injury that drives Dye’s narrative. Govertsen’s sense of maternal bonding is as profound as her expression of love for her fellow Soldiers; this is the stuff of quietly flowing tears. She handles the assignment with honesty, not the hand-wringing that could have spoiled the ethos. She “shows” rather than “tells,” and the effect is stunning in its simplicity and power.

Along the course of her heartrending journey, Soldier meets service members who tell their stories of love for country and their fellows, of the partnerships honed by honor and shared damages. Enough cannot be said of the contributions of mezzo-soprano Sarah Ponder, tenor Nathan Oakes, and bass baritone Dorian McCall. Their obvious connection to the material is breathtaking and edifying. Baritone Brandon Sokol’s Homecoming Soldier sings his tale of conflicted pride from a wheelchair at the front of his family’s church, stumbling over expletives and expressions of agnosticism while opening his heart to his community. Sokol again delivers the performance that the Chicago musical community has come to expect of him. His lyrical voice leaves no emotion unexpressed with expert tone-painting, yet his technique disappears behind raw, trustworthy characterization. A real Army Veteran’s Chorus rounds out the casting. Their prideful vocals and faithful expressions bring the story home in a visceral way.

It is no surprise that Redler also writes musical theater, and Dye is an actor, director and experienced opera librettist. The music is grounded in contemporary compositional structures, yet is beautifully tuneful in equal proportion. These important words are arranged with profound understanding and method. Go hear this piece to experience the art with which it is created and produced. More importantly, go experience this piece in celebration of the brave humans who fight for those of us who watch the conflicts from the safety of our living rooms. (Aaron Hunt)