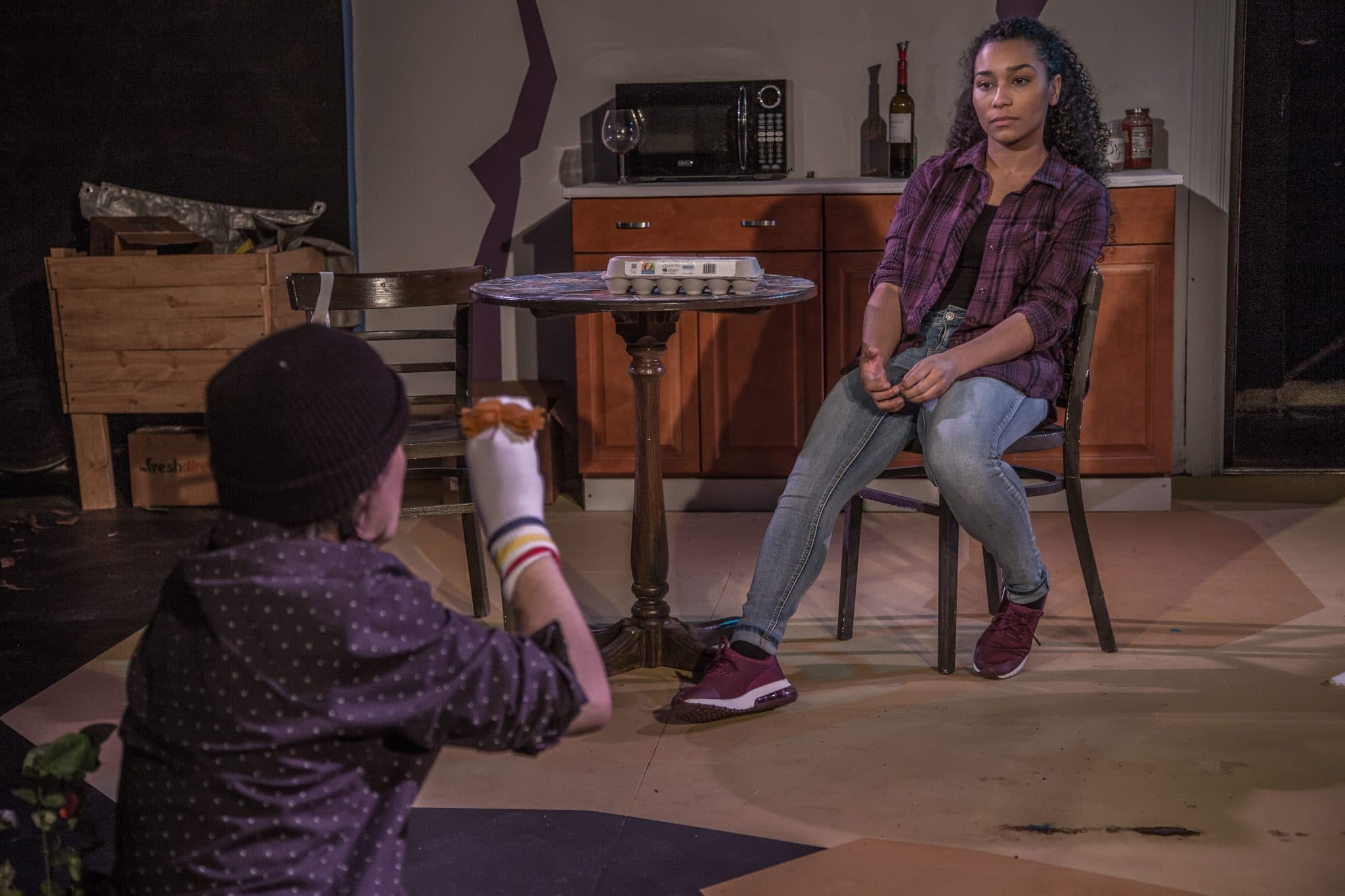 Near the end of Red Tape’s production of “The Queen of Sock Pairing,” a pipe opens and shit falls onto the stage in a short, gloppy metonym of pleasure and release that had been suggested for the earlier eighty minutes through a persistent drip of water (that I don’t think was deliberate, but may as well have been).

The Queen is Celia (Elena Victoria Feliz). She is a maker—no, wait, a poet—as well as a frustrated Brooklynite working for somebody who makes more than her—fiscally, creatively—only finding degrees of redemption in her kinks and her art. Her poetry is beautiful, furious and funny. She and her Narrator (Jalyn Green) begin with babka. Then slut.

Playwright Sophie Weisskoff, whose script engages and interrogates in equal parts, avoids referencing or using masks: characters are, when playing the role, the role. There is never an exploration of those roles specifically but instead a series of questions about the interactions between context, power and play. The patriarchy is only a looming shadow until it’s called into focus. Pleasure and art are parallel concepts, both derived from conflict and balance. Weisskoff’s play is complex, filled with the depth that can only arrive from an interplay of actions and layering concepts over each other. She distills moments from the kaleidoscope of power to moments of blissful (or vicious) clarity.

The text is supported by a strong cast, performers who smoothly fracture pieces of their relationship to present a dynamic with great specificity. Feliz and Green ground a group that could have easily flown off the handle. On the other end of the spectrum, Brenda Scott Wlazlo is a caricature as Celia’s boss, who opens up for moments of intimacy and pain that allow empathy to crack into a show that is, otherwise, almost exclusively from Celia’s perspective. And this is why the poop matters: the poop is a reckoning with all the things that she cannot hold anymore: her boss’s child (Scot West), all the pasta sauce, the imbalanced relationship.

Though that poop, like much of the design and direction, feels indecisive, unwilling to settle on a specific interpretation or attitude of what Celia’s world is. The poop only leaks from the ceiling because the play says the poop leaks from the ceiling not because it carries a more substantial meaning. This devotion to literalism denies the play some theatricality and leaves us stuck in an oddly clean portrayal of abuse and messy capitalist power dynamics. All that to say: I wanted more poop. Poop oozing from the cabinets or dropped on stage in a water-balloon deluge.

But y’know? I’ll take whatever poop I can get. (Persephone Jones)