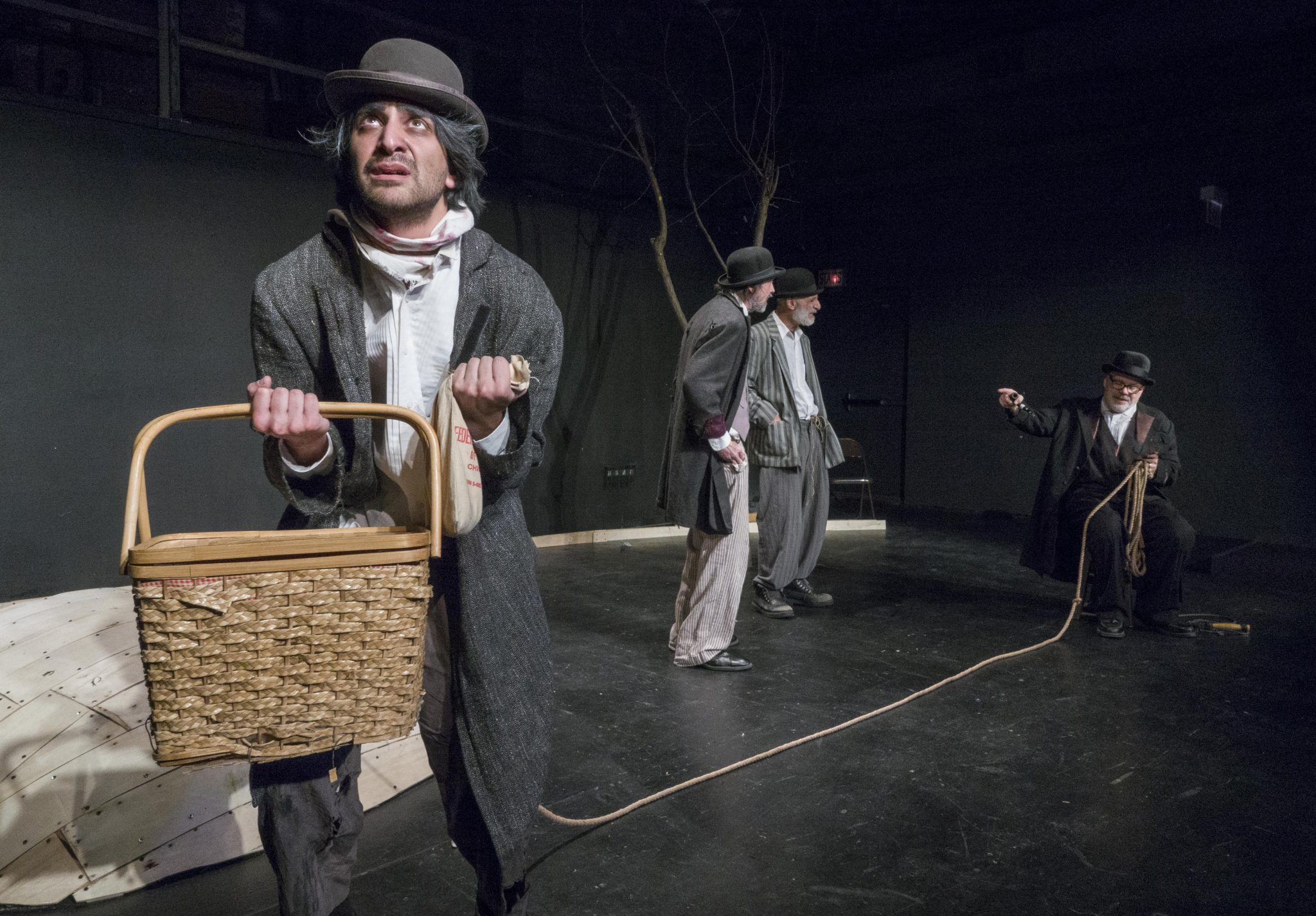 What better holiday-time outing with the kiddies than an evening of “Waiting for Godot,” Samuel Beckett’s postwar “Tragicomedy in Two Acts” that explores the futility and meaninglessness of human existence? Who needs sugar plum fairies when you’ve got Vladimir (aka Didi) and Estragon (aka Gogo), two tattered, worn-down tramps whose fondest hope is that they’ll one day possess a rope sturdy enough to hang themselves from the scraggly shrub that, like Charlie Brown’s Christmas tree, pathetically adorns the otherwise bare set? Or Pozzo and Lucky, the play’s other pairing, literally yoked together in a bizarre and disturbing master-slave relationship?

The timing of the presentation must have offended the Ghost of Christmas Present or whomever watches over the season’s shows, as this production, helmed by longtime (now emeritus) Victory Gardens artistic director Dennis Zacek, has been snakebit from the start. Of the five original cast members, two—Vladimir and Pozzo—withdrew for health reasons, resulting in a truncated rehearsal schedule for their replacements. As of late November, two weeks into the run, the substitute Vladimir was still reading from a script during the second act, affecting the Didi-Gogo interchange at the heart of Beckett’s existential vaudeville routine.

If the on-book performance were just a glitch in an otherwise sound staging, it would hardly be worth mentioning. But it’s symptomatic of deeper problems of concept and execution, which render this two-and-a-half-hour production a soporific disappointment both for Beckett aficionados and those sampling the Irish writer’s iconic high-modernist play for the first time.

The trick with “Godot” is capturing the elusive (and allusive) ambiguity that characterizes Beckett’s classic work of anti-theater. Famously described as “a play where nothing happens—twice,” “Godot” eschews anything as bourgeois as a normal storyline because, in the author’s mind, sequential stories are just another of those devices we use to distract ourselves from the ambient absurdity. Instead of plot and character, we get pratfalls, pointless games, insult contests (the ultimate put-down is “critic”) and general silliness, as well as Joycean wordplay, moments of startling and beautiful poetry and richly eloquent silences. We should be tickled, angered, provoked, saddened: in a word, engaged. But we’re kept at a distance here in a staging that’s weak at both ends, lacking the antic goofiness of a good clown show and the pathos of the characters’ spiritual anguish. Nor does the production fully mine the self-reflexive humor of a play where the actors remind us frequently that there’s a show going on, and not necessarily an entertaining one. (“Worse than the pantomime./The circus./The music-hall./The circus.”)

The actors are all solid veterans (other than winsome third-grader Cooper Hoyt, who plays the messenger boy of the mysterious, teasingly absent Godot) who know how to wield a defining gesture and craft a character. Yet there’s little chemistry between Mike Saad’s childlike Estragon and Larry Neumann Jr.’s cerebral Vladimir. Supposedly together for fifty years, they lack the symbiotic bond of an old couple. Similarly, Steve Pickering’s Pozzo and Nima Rakhshanifar’s Lucky, welded to each other in a perverse codependency, seem oddly disconnected. The choice of a cornpone Southern accent for Pozzo, the cultivated, entitled aristocrat, doesn’t work well; it’s too specific for the undifferentiated wasteland that is the play’s setting. The fright-wig-wearing Rakhshanifar has the play’s most vivid moment, nailing Lucky’s long, mock-pedantic first act monologue. It’s a tour de force of associative logic building toward a doomsday climax, which speaks to our own time.

Unfortunately, too many other scenes play as though the cast were holding back emotionally. The work is set in a mostly lifeless, perhaps post-apocalyptic world, but there’s a vigor and tangy wit to the language that isn’t communicated here. What Beckett attempts is to enact the tedium and painfulness of existence reduced to its barest minimum and somehow make it playful and funny and perhaps even a tiny bit hopeful, as when the seemingly dead tree shows signs of life in the second act. When a production of “Godot” captures that paradoxical message, the experience of waiting seems pregnant with possibility, as though we were on the verge of a revelation. When it doesn’t, we’re just waiting for the curtain to come down. (Hugh Iglarsh)