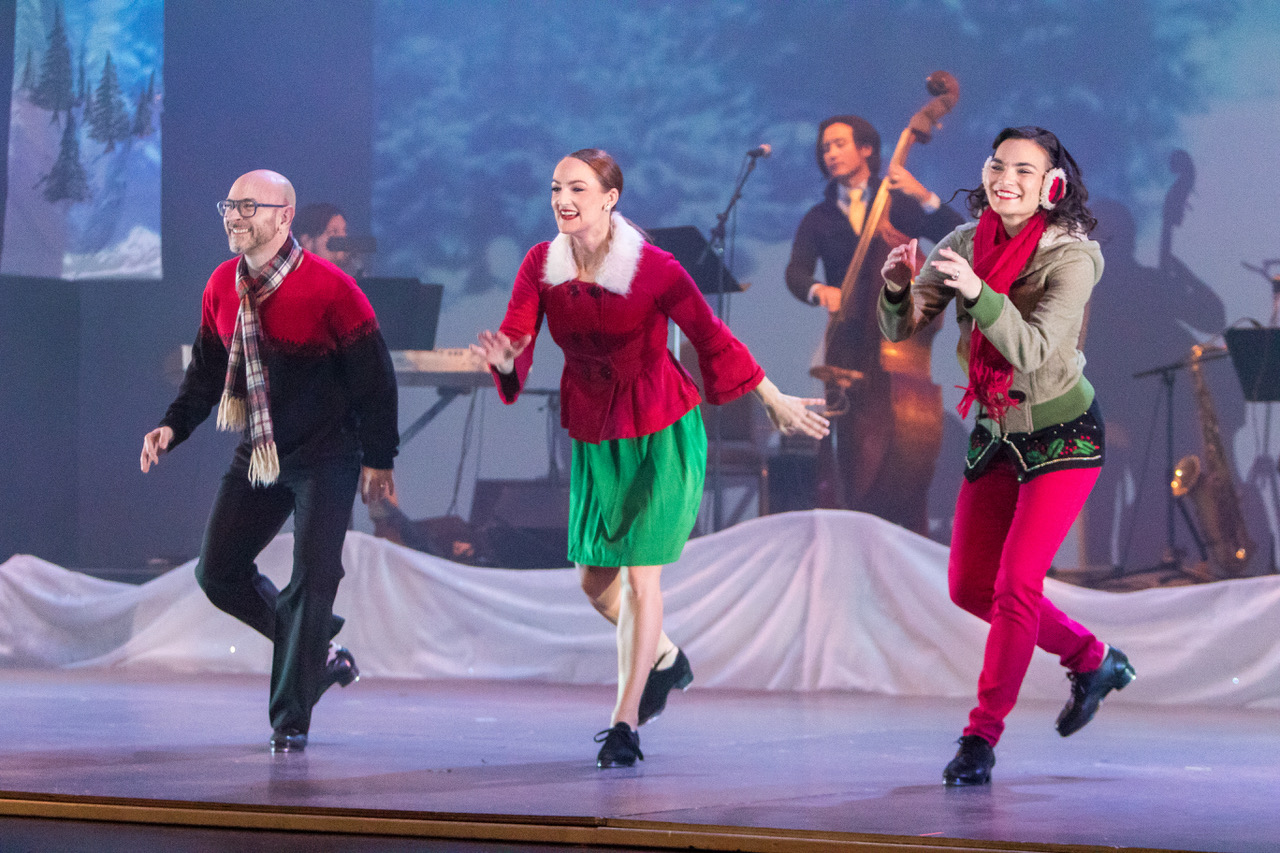 For over a decade, Chicago Tap Theatre has provided family-friendly holiday fare with “Tidings of Tap!,” an evening-length celebration of the season. The show features percussive dance backed by a five-piece jazz band, providing an aural alternative to Tchaikovsky and a visual reprieve from glitter and miles of tulle. CTT enlisted the help of Jump Rhythm Jazz Project founder Billy Siegenfeld this year to add narrative structure to the formerly revue-style show. I spoke with CTT artistic director Mark Yonally about the evolution of the show and what to expect this season.

“Tidings” has become something of a holiday tradition. Could you provide a little background?

Sure. We started it twelve years ago and at the time there wasn’t much holiday dance entertainment in Chicago. There were no percussive dance holiday offerings and all the holiday dance offerings were around Christmas. The mission of the show was to highlight the winter season in general, and Hanukkah and New Year. It used to be more a revue, with pieces that didn’t really connect to one another. About four years ago, we began crafting narrative so the audience could follow a central character and leave with an emotional lift. We created a central character played by rhythmic dancer Dasha Merkulov. The first year she did it she was twelve years old, and even then she was a prodigious rhythmic gymnast. This year she made the USA Women’s Rhythmic Gymnastics National Team. It adds that little bit of extra magic to the show; not only do audiences get to see great dancing, they see a top athlete perform. This year we added another big element: I felt the show could use an extra eye to bring the human element more to the forefront, so we hired a director to come in and bring a theatrical vision to the show that would tie everything together.

That’s right. We worked with him on “Time Steps,” which he directed for us in 2016. It was a real watershed show for us. It made the top-ten list in the Sun-Times and also was in Dance Magazine in their reader poll as one of the best new productions in 2016. We were alongside all these big names—Twyla Tharp, Alvin Ailey. Also Billy’s been a personal mentor to me for eighteen years.

How have you seen the show change with Billy’s direction?

I talked to him about what I wanted the show to say, and we went through it and talked about what wasn’t clear to an audience, and [we worked] to strip away some of the rhythmic complexity in early parts of the show, in favor of emotional clarity. And then adding that complexity later in the show when the audience, feeling they have a handle on the story, can sit back and enjoy the dancing.

It’s a young girl’s journey. Through the show we see her get a greater sense of who she is and finding her voice and confidence. As the show begins, it’s winter and she stumbles upon a Hanukkah celebration with three beautiful pieces with a klezmer flavor. We have intermission, then come back and have a Christmas section that encompasses things like commercialization of the holiday and getting back to warmth and family and togetherness. The show culminates in a three-piece New Year’s Eve trio, choreographed by our own Kirsten Uttich.

You have youth performing as well?

We do. We love the opportunity for kids to see other kids performing on stage. The kids who participate in our intensive on November 16 and 17 learn a two-and-a-half-minute dance and get to perform it on the North Shore Performing Arts Center stage.

Even though it’s a production we do every year, we look at it for what’s working and what could be tweaked. There are new dances this year, so even if people have seen the show before, they will see new things. We have a new music director, Corbin Andrick. He’s a clarinetist and saxophonist and is creating some new arrangements for us. For audience members who have seen the show before, their personal favorites tend to be our favorites and we bring them back year after year. We have a gorgeous piece to the Vince Guaraldi “Peanuts” skating song we’re bringing back, choreographed by Caleb Teicher. Five years ago Caleb was a nineteen-year-old choreographer and we were his first choreographic commission. This last year, he was featured as a solo dancer in Regina Spektor’s show on Broadway. It’s been really cool to see his career take off. It’s great when you see people you know who are talented and great people, succeed.