The Conspirators are a young theater company with an old soul. Rooted deeply in Chicago theater history, the group borrows enthusiastically from just about every subversive aesthetic movement of the last century, from German expressionism and high modernism to absurdism and punk.

What they have achieved with their first two major works—“The Resistible Rise of Herr Helmut Drumpf” in 2016 and “The Deckchairs, or Make the Titanic Great Again” two years later—is nothing less than the revival of political cabaret in Chicago, just when most needed. Heavily influenced by the dramaturgy of Bertolt Brecht, but in pacing and vibe more like the old Carol Burnett variety show, the Conspirators’ plays are goofily outrageous assemblages of satire, song, clowning and sketch comedy, which deliver their topical commentaries with wit and verve. 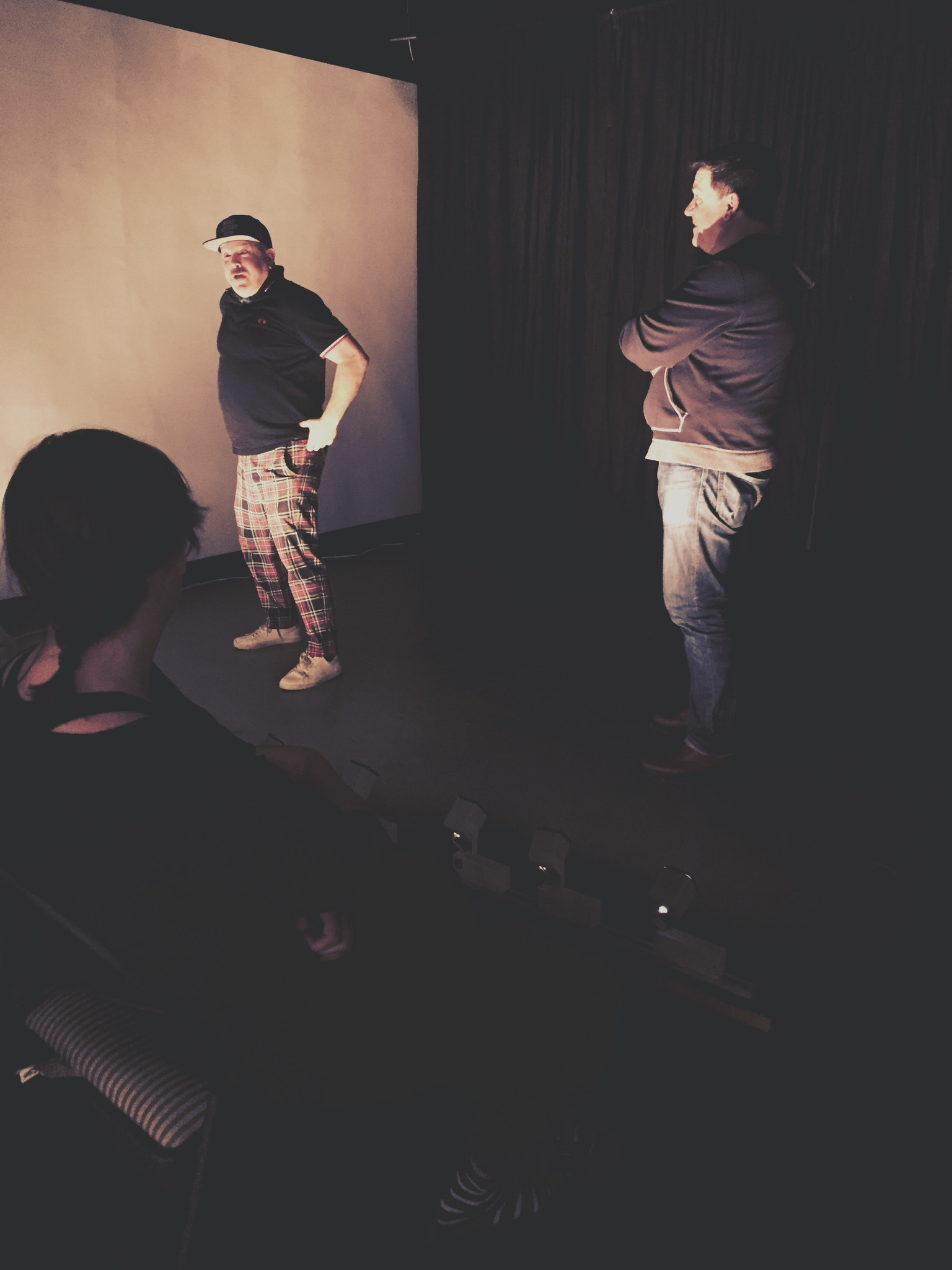 Director Wm. (Billy) Bullion and writer Sid Feldman are the Conspirators’ brain trust, longtime friends and creative partners who share an approach honed over four decades of theatrical troublemaking. I talked to the pair in a diner across the street from the Athenaeum, where they were finalizing preparations for “Accidental Death of a Black Motorist,” their latest production. Both have day jobs and were running on much coffee and little sleep, but found the wherewithal to be effusively friendly and responsive.

Bullion and Feldman both hail from Evanston, where they met as teenagers almost forty years ago. “We were both Mods,” says Feldman. “We would go to the same concerts.” Their paths split during their college years, with Bullion attending UCLA, where he fell in with Tim Robbins and other members of the Los Angeles-based Actors’ Gang, and afterward spent a year studying directing at the Goodman School of Drama (now the Theatre School at DePaul). The Actors’ Gang originated what’s called simply “the Style,” a modern take on the age-old Italian popular theater form known as commedia dell’arte, which combines character-based improv with a zany physicality. With its rimshot punchlines, grotesquely plastered-on makeup and emotionalized line delivery, the Style also owes much to such lowbrow art forms as vaudeville, burlesque and Looney Tunes. Every Conspirators play is performed in the Style… but I’m getting ahead of myself.

While Bullion, who calls himself a “lifelong storefront theater maker,” studied drama and later acted and directed at a number of local troupes, including Sliced Bread Productions, Prop Thtr, Akvavit, Babes with Blades and Factory Theater (where he’s currently marketing director), Feldman took another route. “I had no training in theater,” he says. “I was a philosophy major at Loyola when I opened my own window-cleaning business and dropped out of school.” Early on, Feldman got into the business side of the arts, promoting nightclubs, managing bands and eventually producing plays.

In the nineties, Feldman served as producer at New Crime Productions, which imported the Style to Chicago. The high-concept, punky troupe was meant to be a surrealistic slap in the face of the local theater scene, but it ended up more as a launching pad and side project for such heavy-duty talents as John Cusack and Jeremy Piven. I reviewed New Crime’s hyperkinetic 1989 staging, directed by Cusack, of Yvan Goll’s Dada-inspired oddity “Methusalem,” concluding that the play “won’t bore you, but it may grate on your nerves,” which of course was the point.

New Crime got old and died in 1995, a victim of its own success, but not before doing “Accidental Death of an Anarchist,” Nobel Prize-winning playwright Dario Fo’s fact-based account of an Italian radical’s police-assisted “accidental” tumble from a high window. The production made an impression.

In the meantime, Feldman had been bitten by the writing bug. “I was involved in theater, and I didn’t always like what I saw,” he says. “I thought I could do better. So I started writing plays and screenplays, and then I reconnected with Billy.”

By the middle of this decade, the two old friends felt the time was ripe for a new theater company. Says Bullion: “We were champing at the bit, feeling like we wanted to do something rougher and more significant.”

As the presidential election loomed in 2016, the pair devised its takeoff of Brecht’s “The Resistible Rise of Arturo Ui,” performed in the Style. Recasting the villainous Ui—a melding of Hitler and Al Capone—in a Trumpian mode made Brecht’s 1941 play both more relevant and more resonant.

“We want to create theater that’s magical in the Brechtian way, showing the audience our tricks,” explains Bullion. “But it’s not just clowning around,” adds Feldman. “There’s a serious eye on reality.”

Which makes Dario Fo’s 1970 satire such a natural fit for the cabaret troupe, after being retrofitted for 2019 Chicago. “We’re doing that play, but we’re not doing that play,” says Feldman. “Here, we don’t have an anarchist problem, like Italy. We have a cops killing black people problem.”

As with Fo’s original, the show will have its share of commedia-style playfulness, as the troupe seeks to convey not just the viciousness of racism and police brutality, but also the absurdity and hypocrisy of a system whose idea of serving and protecting too often involves shooting first and lying later, and which protects the perpetrators with a Mafia-like code of silence.

Treating subjects as dark as police violence and encroaching fascism in a farcical manner may seem counter-intuitive, not to mention inappropriate. But the two Conspirators argue that such an exaggerated, stylized approach is dramatically necessary to reach today’s theatergoers.

“Quizzical isn’t theatrically interesting,” says Feldman. “Scared to death is. Look, the big, serious theaters in town are losing subscribers as their audiences get older. But a vaudeville-ish style draw draws everyone in, because it’s theatrical. Without that style, you might as well watch it on PBS.” Echoes Bullion: “Theater has to be theatrical. It has to have some reason to exist as theater, not as any other medium.”

And so the Conspirators forge ahead, doing their own thing, challenging not just the reactionary political forces in society, but also the stodginess, cautiousness and narrowness of the city’s theatrical establishment.

“Theater should be the thing that exorcises our demons collectively,” says Bullion. “I love all those large questions asked by modernism. What’s missing now in theater are the universal truths. All we get are the tribal ones. It’s tribalism that sells tickets. But you’ve dropped all critical and self-critical thinking.”

There’s no shortage of critique in the Conspirators’ radically irreverent work, which attacks everything from political chicanery to media idiocy to their own pretensions, all in a spirit that’s intellectually serious but never solemn.

The simplicity and informality of the group, which holds no auditions but does subject performers to demanding workshops in the Style, are its strengths.

“We’re reverse-privileged,” says Bullion. “We don’t have to pay much rent, so we can be fast and loose.”

After three years, the Conspirators are well on the way to forming a community of like-minded artists, which will make their collaborative theater-making process easier and more fluent.

“To conspire literally means to breathe together,” notes Bullion. And that’s their goal: Not only to come together creatively as a company, but also to connect in a deep and meaningful way with their audience.

On December 20 and 21, the troupe will present “Ayn Rand’s ‘It’s a Wonderful Life’ as Performed by The Conspirators Under the Direction of Debbie Wasserman Schultz,” a holiday show with variety acts, written by Sid Feldman and directed by Wm. Bullion. It will be performed at the Charnel House, 3421 West Fullerton. For more information, visit conspirewithus.org