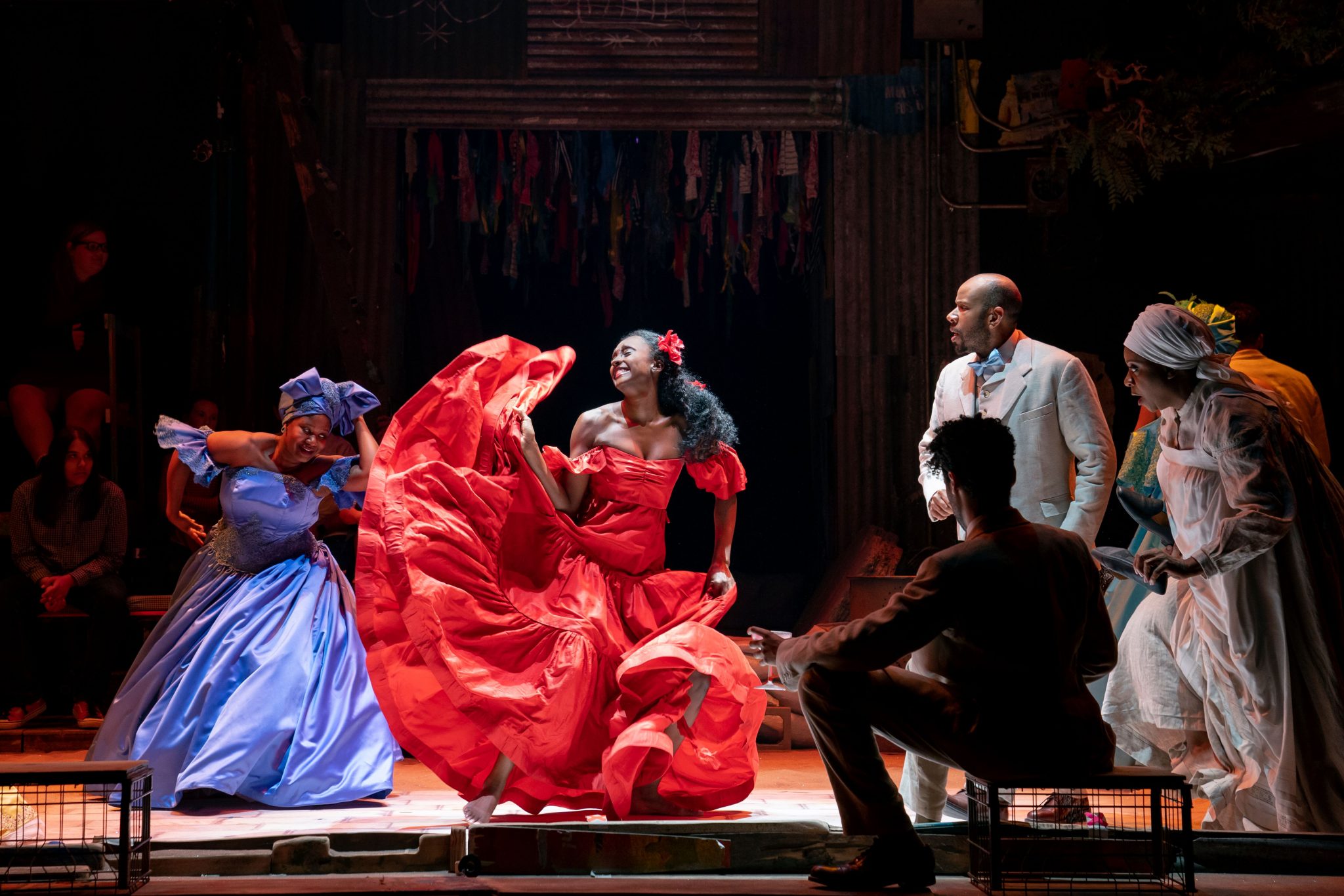 If our country’s political environment is exhausting you with its complexity, Broadway In Chicago offers some of the same themes in a gentler rhythm. Ride on the flowing skirts of calypso-style music, brought to life by a fantastic cast of performers, several of them veterans of the Broadway production.

“Once On This Island” is a fable, as pure and simple as rushing spring water. Through the intervention of the gods of the island, a young girl (Ti-Moune) is saved from a storm that wipes out her entire village. An older couple find her stranded in a tree and, with a little more godly intervention, take her in, despite their own meager state. The girl comes to believe that the gods spared her for a reason and begs them to show her what it is. The Goddess of Love, Demon of Death, God of Water, and Mother of the Earth decide to give the girl the opportunity to choose between life and love. They arrange for the son (Daniel Beauxhomme) of one of the wealthy, lighter-skinned descendants of French planters and their slaves living on the other side of the island to wreck his car in another storm and for the girl to find him. She saves him by promising her life to Death in exchange for sparing his. The clashing of classes, born of entitlement, fed by uneven distribution of resources, fight against the girl’s determination to live her life for the purpose of loving. This ninety-minute cantata, similar in format to “Joseph and the Amazing Technicolor Dreamcoat,” requires no subplot. This parable of “one small girl” is feast enough.

The four gods are beautifully etched by Cassondra James (Love), Tamyra Gray (Death), Jahmaul Bakare (Water) and Kyle Ramar Freeman (Earth), with James and Gray repeating their Broadway assignments. Both Courtnee Carter (who made her Broadway debut as Ti-Moune) and Tyler Hardwick invest the lovers with layers of complexity while never overplaying. Carter sings with a fantastic high mix, keeping her voice fresh for the many passages where she must float lyrical phrases and Tyler’s pliant tenor is just as attractive. There is not a weak link in the casting.

The players in this production dance with great freedom, and it is heartwarming to see a variety of body types celebrated in the casting. This production, as was true on Broadway, eschews traditional notions of gender, without apology or self-congratulation. If the music wasn’t wonderful and the story a hopeful look at macro-challenges that never seem to evaporate, these points would still be enough to send folks flocking to the Cadillac. (Aaron Hunt)