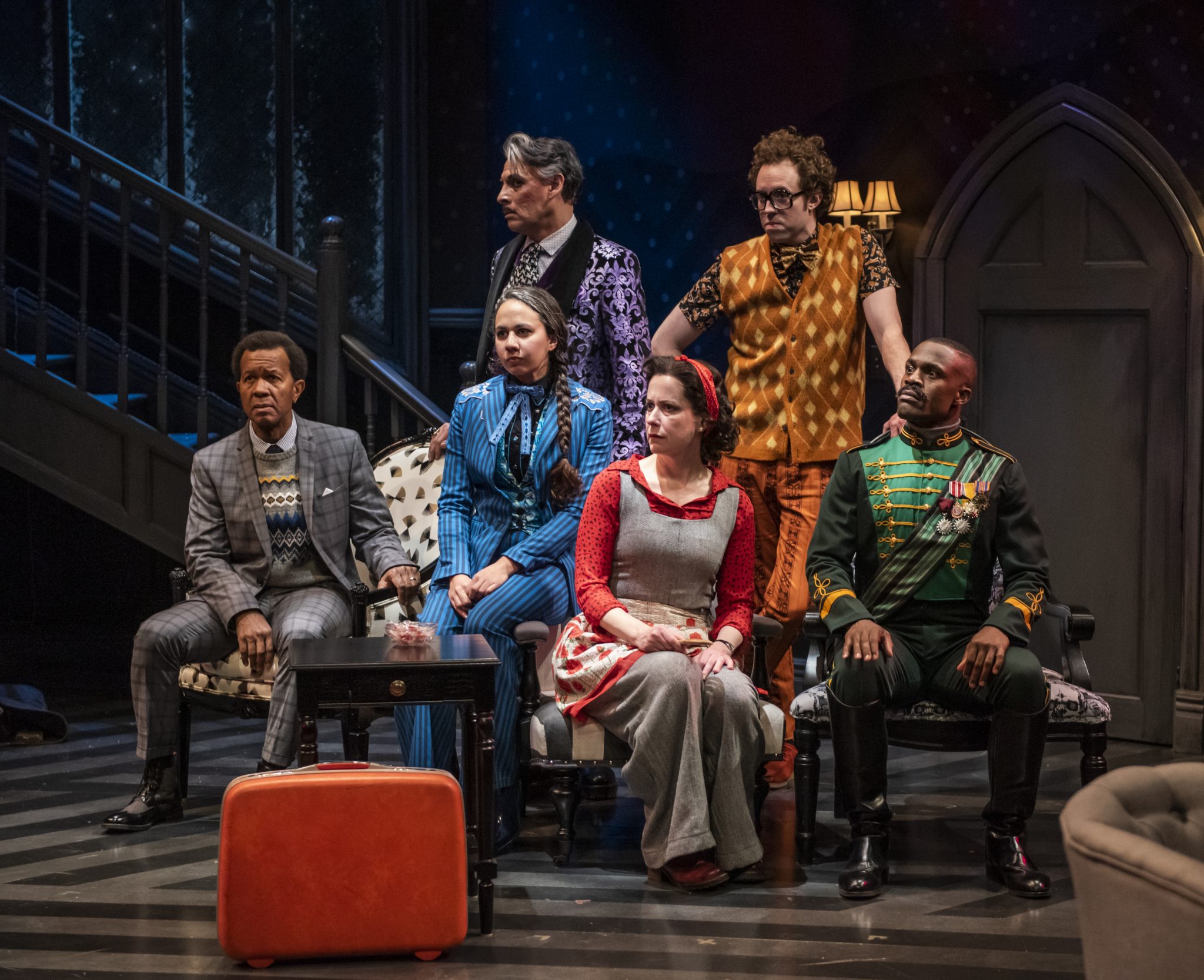 The cast of “The Mousetrap”/Photo: Michael Brosilow

“We must have a nice dinner. I was thinking of opening two tins of minced beef and cereal and a tin of peas and mashing the potatoes,” says Mollie Ralston (Kate Fry), the new proprietress of Monkswell Manor, anxiously and unironically. With her husband Giles (Allen Gilmore), Mollie is welcoming strangers into her lodgings for the first time, several of them on a relentlessly snowy evening, where mischief, murder and mayhem are to descend upon the unsuspecting young couple.

It’s the precipitation that seals such decisions so firmly and sets the scene for a mystery that demands the proximate satisfaction of certain revelation. We know something of this here in Chicago, with our Airbnbs and Ubers, our polar vortices and homicides. But the English, whatever their flaws, have always succeeded in creating cozy nostalgia for themselves, their barbed propriety, their charming eccentricity and understatement and even the pasty monotony of their cuisine. All these qualities, which Americans have been bred to revere, are on full display in Court Theatre’s vibrant production of Agatha Christie’s “The Mousetrap,” directed by Sean Graney.

The action unfolds on a looming set (by Arnel Sancianco) replete with stone fireplace, high windows and doors that swing loosely on their hinges and the portrait of an unspecified woman glaring witheringly upon those assembled. The murders begin before the play proper, when a woman named Maureen Lyon is strangled in her London home. Lyon isn’t her real name, and no one is very sorry to hear of the death of a woman who abused and criminally neglected her foster children years ago. But the murderer has left two clues: the address of Monkswell Manor and the nursery rhyme, “Three Blind Mice.” Who will it be: the fey faux architect Christopher Wren (Alex Goodrich)? The insufferably pompous Mrs. Boyle (Carolyn Ann Hoerdemann)? The brooding, bratty Miss Casewell (Tina Muñoz Pandya)? The flamboyant unexpected guest Paravicini (David Cerda)? Or someone else just as fabulously committed to monochrome couture (costumes designed by Alison Siple) and characteristics just on the far edge of ordinary?

The lights (Claire Chrzan) shift constantly across a spectrum of colors that reflect our universal inability to quite know who we’re with and what we’re seeing. All the cigarette smoking of the original has been replaced by a frenzied consumption of hard candies, a device that subtly ramps up the tension on stage with the nervous crackle of wrappers coming undone, the mild anxiety that the supply of sweets might abruptly come to an end and the persistent threat of autoasphyxiation. Catch this “Mousetrap” while you can: unlike the West End production, which hasn’t closed since 1952, there’s only about three weeks to have the pleasure. (Irene Hsiao)