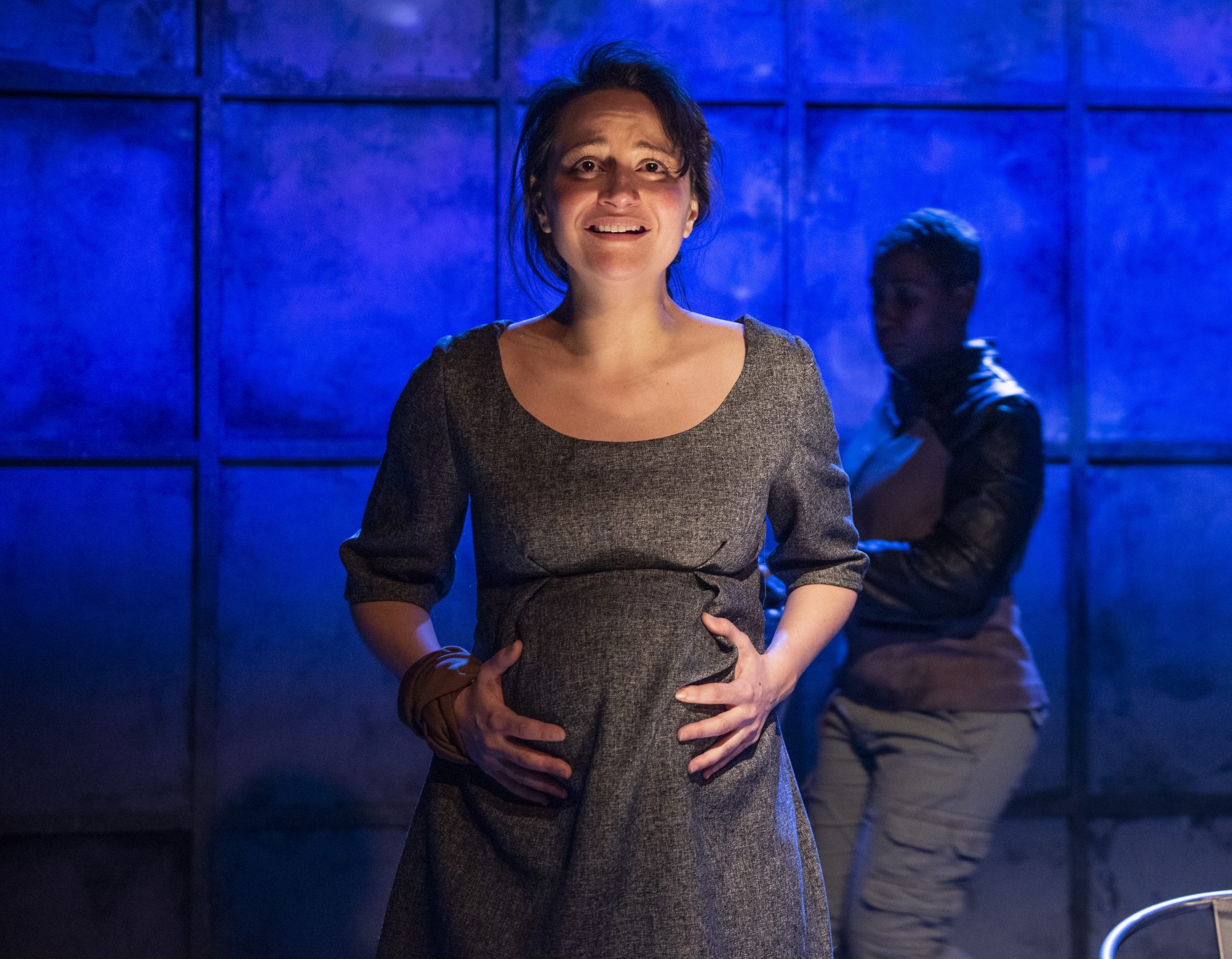 Meghan Brown’s new play, “The Tasters,” a dystopian tale about an authoritarian state wracked by civil conflict, is a riveting work of theater, carrying the audience through ninety minutes of unpredictable plot twists and ever-accelerating suspense. Set against the all-too-real backdrop of the Senate’s see-no-evil “trial” of a proudly corrupt, sadistic and law-flouting president, the play seems less futurist fantasy than a parable of life in a failed state turned patriarchal prison-house. Director Devon de Mayo and her youthful, highly charged cast distill every drop of relevance from Brown’s taut and imaginative script, transforming Rivendell’s tiny storefront space into a pressure cooker of dramatic tension and political implication.

The playwright captures the paranoid national mood, translating it into an Orwellian fable of a society run along the lines espoused by the omnipotent Party in “1984”: “a boot stamping on a human face—forever.” The story plays out in a windowless room—designed to maximum claustrophobic effect by Yeaji Kim, who also devised the artful projections that evoke the outside world—where sit the government’s three female food tasters, who sample the delicacies which batten the murderous General (Eric Slater) and the Great Leaders he serves. The meals, wheeled in by a smarmily obsequious junior officer (Collin Quinn Rice), lend a darkly funny, yuppie-foodie touch to the dreary environs. It’s all aioli this and quinoa that, no doubt organically grown and locally sourced. Also potentially poisoned, thanks to the rebels who have infiltrated the General’s fortress and make eating, the most basic life-giving activity, a daily encounter with the possibility of gruesome death. Well-chosen slide projections illustrate this paradox with sped-up footage of fresh, enticing food rotting away into moldering piles of decay: the same fate that awaits neglected democratic institutions.

The three tasters—Bianca (Paula Ramirez), the pregnant mistress of the General; Corrine (Daniella Pereira), a true believer eager to serve the monstrous government; and Elyse (Shariba Rivers), the captured head of the resistance forces—are the most important members of the General’s staff and key to the regime’s survival. The play traces their different responses to oppression, ranging from Corrine’s initial eager-beaver identification with power, which one sees at Trump rallies, to Bianca’s pragmatic acceptance of her own weakness and willingness to dally with the demonic General in return for a vague promise of safety for her and her unborn baby and Elyse’s heroic and personally costly confrontational spirit, which takes the form of a hunger strike.

The actors portraying the trio of tasters dig deeply into their roles’ backstory and situation, producing characters that are intense, layered and plausible within the story’s context. Pereira’s ultimately traumatized and disillusioned Corrine and Rivers’ commanding yet vulnerable Elyse are rounded, compelling personalities. Slater is smugly villainous as the General (“We’re the ones cursed with having to pay attention,” he says self-pityingly) and Rice is suitably pathetic as his subordinate, who wants everyone to know how personally painful it is to carry out the General’s atrocious orders, which this nice, sensitive officer nevertheless does without fail. But the stage belongs to Ramirez’ Bianca, whose character arc expresses the work’s complex, moving and provocative message. In this pivotal role, Ramirez is never less than convincing and her memorable climactic scene vibrates with quiet dignity and resolve.

“The Tasters” has its plot holes and motivational lapses. As nasty as the General is, would he really subject the mother of his unborn child to the dangers and terrors of being a taster? And not every audience member will applaud the resistance’s shift in tactics from broad-based civil disobedience to conspiratorial coup d’état, which suggests a change from one lawless and violent regime to another. But this well-executed production makes its central point—that it’s no longer possible to avoid choosing sides—with devastating clarity. “The Tasters” mirrors the current moment, and the story it tells, which not long ago would have seemed far-fetched, now feels disturbingly like our own. (Hugh Iglarsh)