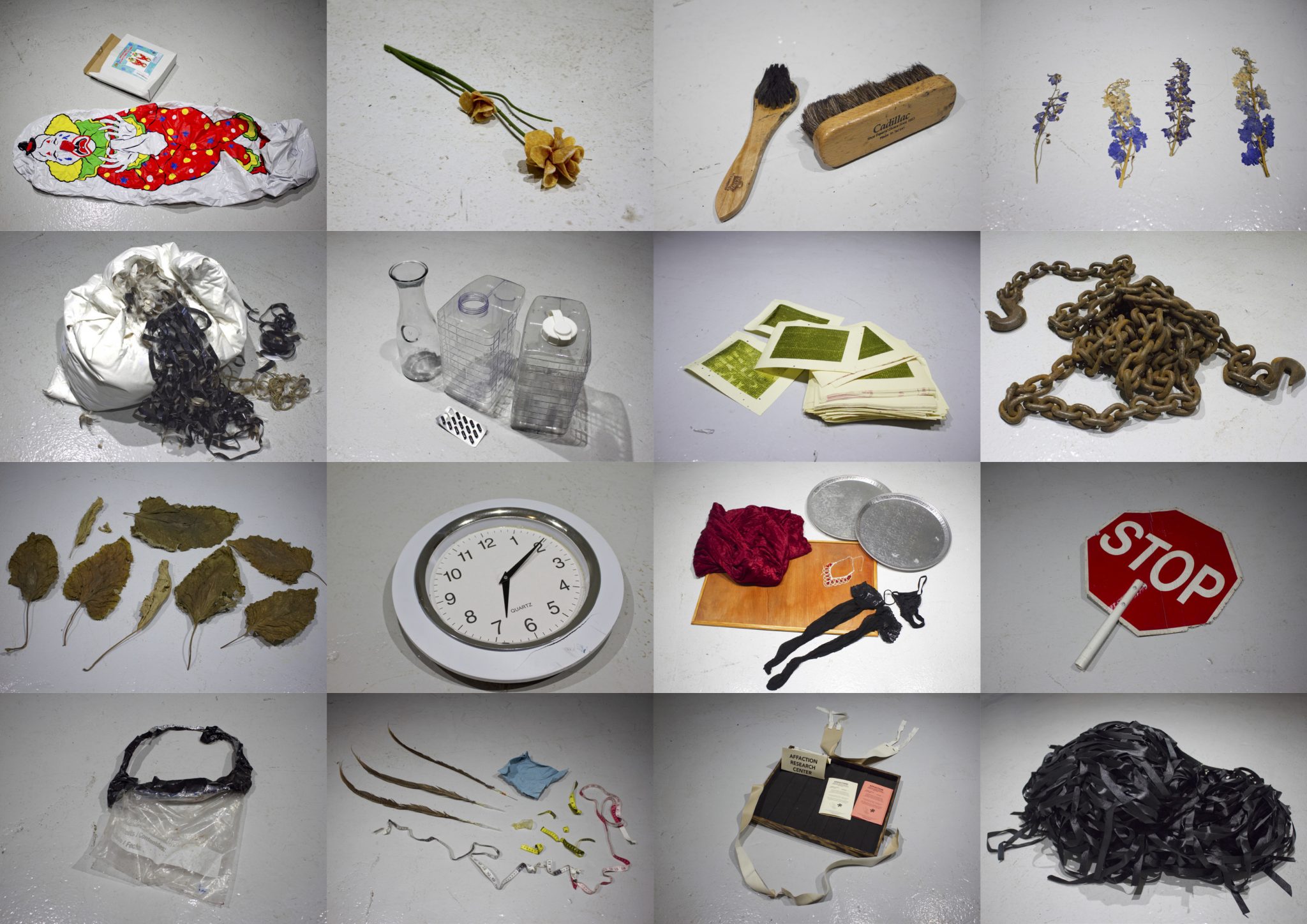 A few of the relics in the archive at Defibrillator Gallery.

In the nine years that Joseph Ravens, founder-director of Defibrillator Gallery (which is also rendered as DFBRL8R) has helmed Chicago’s home for performance art, he’s collected a lot of stuff. From common household items to gently decomposing organic matter to swept-up debris, Ravens estimates that his archive of relics from past performances and exhibitions is around 300 objects, although it’s tough to quantify exactly. “Do you count them by performance or do you count them separately?” artist and curator ieke Trinks asks rhetorically via Skype from her home in the Netherlands. Trinks found inspiration in Ravens’ archive when she visited Chicago a while back to present at DFBRL8R and poked around the basement at their old location on Chicago Avenue. Trinks saw potential in these modest relics: as inspiration for new work and as a bridge between artists past and present. What kind of creative response do these objects elicit? What do they retain from their original use and how do they transform in the hands of another artist? Why keep stuff like this at all? These questions are the prompts for and prompted by “What Remains: On the Sacred, the Lost, and the Forgotten Relics of Live Art,” a three-week festival of exhibitions, performances, discussions, community meals and lectures running February 7-28, marking DFBRL8R’s tenth-anniversary season.

Trinks invited four colleagues from the Netherlands to present as part of “What Remains,” then put out an open call for additional proposals that could be “bold, daring, (un)conventional, conceptual, personal, insightful, (de)constructive, (ir)responsible, monumental, fleeting, portable, technical, emotional, minimal, and all of the above.” The result: more than two-dozen artists from around the globe will converge in response to Ravens’ collection of relics from, or byproducts of past DFBRL8R events. Participating artists had the option to learn how the object was used or could elect to respond just to the thing itself, picking from a catalog of images photographed and compiled by Trinks. The inventory process was long and laborious. “What should the background be? Or, oh there’s a box. Is that a relic?” Trinks says. “I don’t know the original artists, and sometimes Joseph wasn’t there so I wasn’t sure.”

Trinks’ uncertainty about what constituted a relic and what was just random basement stuff is understandable; Ravens’ criteria for the collection is based on intuition. “Sometimes what we want to keep is negotiated in advance,” Ravens, also on our call, says. “But a lot of times it was coincidence. Sometimes it would be the next day and the artists have left and I’m sweeping up and I decide to keep this debris. So it’s the gamut of accidental stuff and things I’ve thought about. We have a makeup towel someone had used as a palette. Sometimes it’s these liminal side things.”

Take the random nature of the collection, introduce the randomness of which objects were included in the inventory and which weren’t due to sheer constraints of time, and then throw in the openness of what participating artists choose to do with them—informed by prior performances or not—and the doors are thrown wide open for what might happen in “What Remains” and where discussions might lead. However, Trinks has categorized exhibitions each week into rough themes of fixing, merge, referential and consume. As the last of those themes suggests, a few relics will disappear or change form by festival close. Trinks asked Ravens how he felt about this and, in particular, the planned departure of a popular red folding chair.

“The red chair has been used by so many artists over the last nine years,” Ravens says. “One artist in the festival is placing the chair in a public place, integrating it back in the world. Setting it free. I’m okay with it. It really makes you question the value of these things. What gives them value? What is the reason or purpose for keeping them? What does an archive offer? We have high hopes that it will be a resource or influence for future generations, but there’s a hubris in that as well, right? What if it just ends up in my sister’s garage for ten years and then gets thrown away after I die? It’s a questioning of it, appreciating the value of it. All that stuff is wrapped up in it. It’s kind of a retrospective without being a retrospective.”