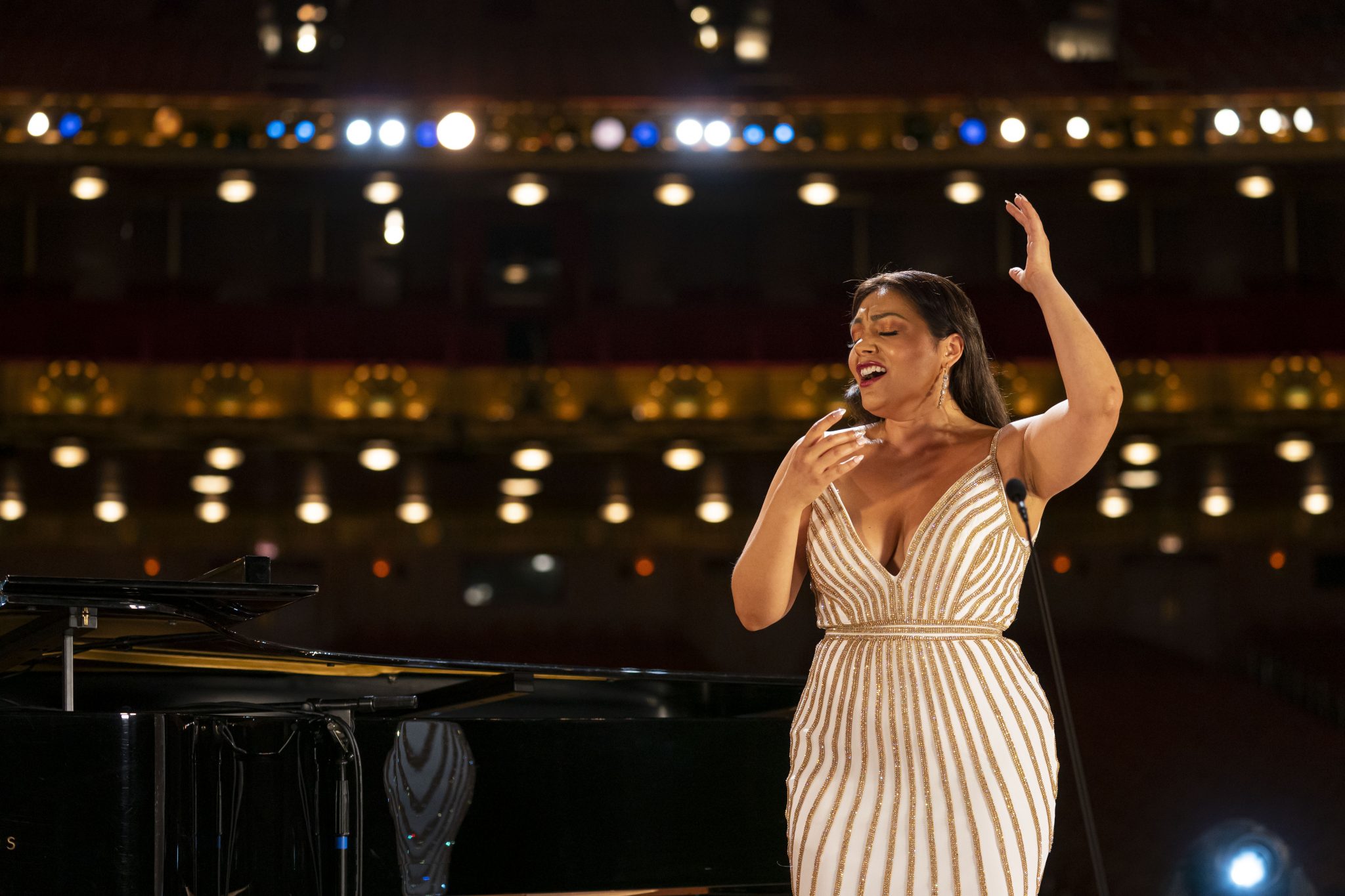 You know that tree in your neighborhood where the leaves always change to red before the others? You should check in with that tree, because autumn is upon us. It’s time for colorful sweaters, shoes that lace and an unusual start of the Chicago arts season.

This year is like no other, and many events that feel organic to the season will not happen. Arts organizations have been crippled by the pandemic, leaving most live performances suspended until sometime in the future. But this doesn’t alter artists’ need to create any more than it eliminates society’s need to be uplifted and renewed. While the Lyric Opera‘s customary grand opening opera ball—with black ties and ball gowns on the red carpet, trumpeters in the lobbies calling out the first spectacular opera of the season—won’t happen this year, the opera house has found a way to usher in the city’s arts season, giving artists the opportunity to make the magic which feeds them, and us. “For the Love of Lyric” will stream live Sunday, September 13 at 6pm, offering a free, thoughtful celebration of the season. Music director Doug Peck, who directed the moving and wildly successful “Chicago Voices Concert” at Lyric Opera in 2017, brings his encyclopedic understanding of vocal music, along with his singular talent for fostering collaboration to create an event that speaks to the time and to our shared humanity. “For me, the Nina Simone quote, ‘You can’t help it. An artist’s duty, as far as I’m concerned, is to reflect the times,’ is foundational,” says Peck. “We have [created] a program that is healing, enlightening, and entertaining in perfect proportion. There’s no orchestration, just me on piano. We didn’t want to put lives at risk so we’re just keeping it simple, as if we’re gathering in people’s homes.”

Soprano superstar Renée Fleming headlines the event, joined by Tony and Grammy winner Heather Headley, soprano Ailyn Pérez, bass Soloman Howard, mezzo-soprano and Ryan Opera Center alumna J’Nai Bridges, current members of The Ryan Opera Center and members of the Chicago Children’s Choir. “The other character in this story is the opera house itself,” says Peck. “Most of us will not be in there for a long time. Some of the Lyric audience members have been going there from the beginning. For them to get to see that space, lit and filmed beautifully, with great singers singing well inside of it is a beautiful placeholder until we can be back in there next time.” 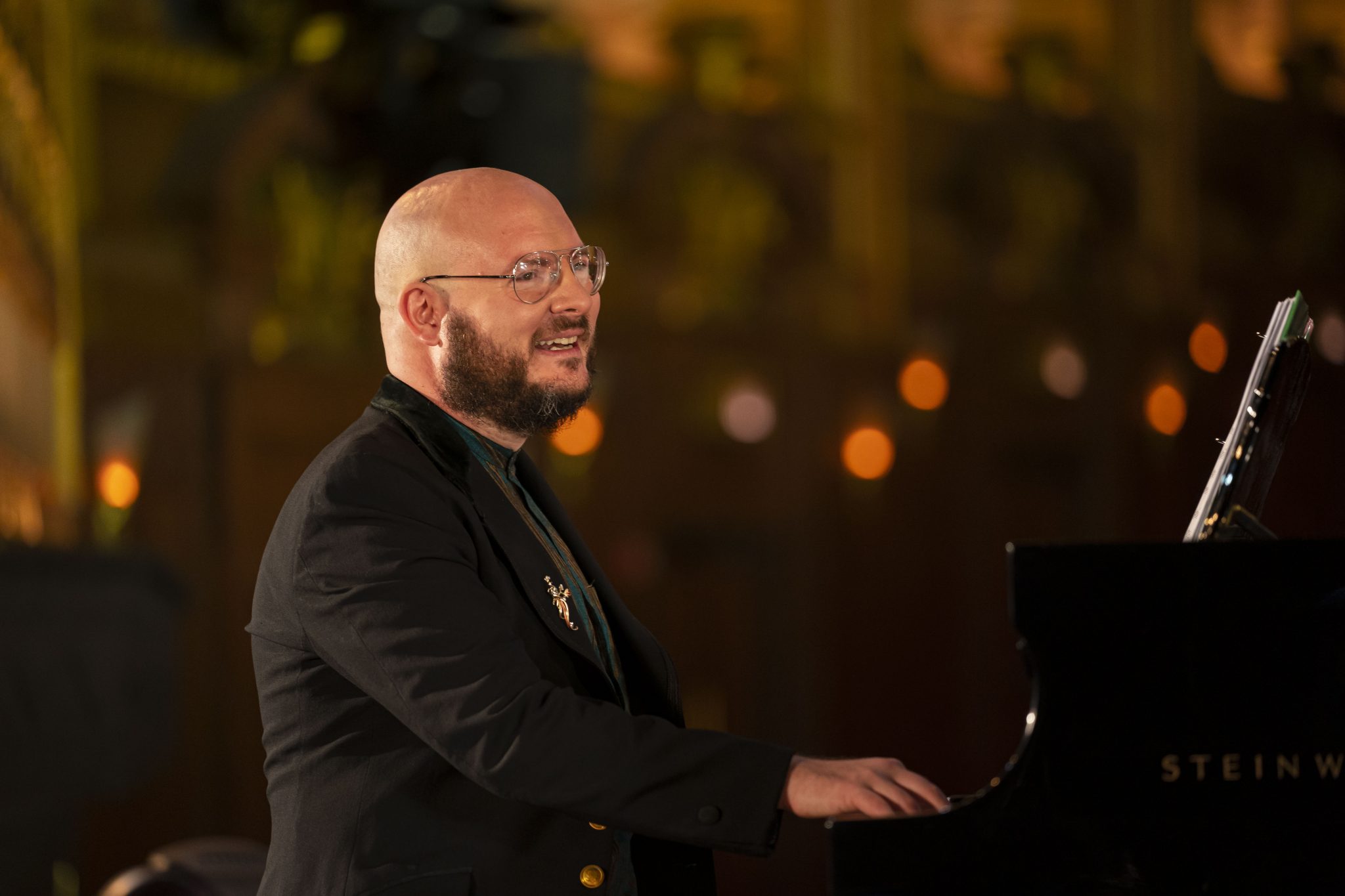 I asked Peck if the singers were able to go into the opera house to record, and if so, what safety precautions were in place. “We did have the chance—Heather, Ailyn, Soloman and I—to go into the opera house last month, and Lyric’s protocol was incredible. We were kept very, very safe. The crew was masked, the singer and I were at six feet facing in the same direction so there was no chance of spray of any particles, and I was masked until we finished the take and I was masked the minute we finished and we went back to rehearsing. We felt safe and it just felt so grand to be in the opera house, hearing voices in that space.

“One moment I’ll never forget… I played the first chord of ‘Il bel sogno’ (from Puccini’s “La Rodine”), and Ailyn Pérez teared up and she said, ‘I haven’t had anyone to play the piano other than me in five months. It’s so nice.’” The Chicago Children’s Choir and The Ryan Center ensemble will appear in the little Zoom windows many of us have grown to appreciate, their tracks passed from artist to artist until it was time for the audio technicians to glue it all together. “The music is definitely multi-genre, about fifty-fifty classical music and non-classical music,” Peck explains. “I reached out to each star and said, ‘Here’s what I’m thinking, but tell me what you want to sing,’ and all of them said that they’re so seldom asked what they want to sing. They had the opportunity to think about where they find themselves in this moment in time. We are in a pandemic at a time of civil unrest, and our art form is threatened, yet we are hopeful. With those pieces all in play, what do we want to sing?”

Instead of the national anthem, the program opens with Soloman Howard’s rendition of the Black national anthem, ‘Lift Every Voice and Sing,’ first performed in 1900. The piece began as a poem by James Weldon Johnson, which was set to music by his brother, J. Rosamond Johnson. “Soloman is also singing ‘The Impossible Dream,’” Peck says, “which he felt is where his spirit is at right now, that man covered with scars who’s reaching for the impossible stars.” Pérez is also thinking heavenward at this time. Peck says, “It was really important to Ailyn to include a Spanish-language piece because Chicago has such a large Spanish-speaking population, so she and I did a new version of ‘Estrellita (Little Star),’ that she sings so beautifully.” While often thought of as a love song, “Estrellita” reaches further in its exploration of the human condition, with lyrics that that begin, “Little star from the distant sky / That watches my pain / That knows my suffering / Come down and tell me if you like me a little.”

The Chicago Children’s Choir will add some Sesame Street, and The Ryan Center artists have prepared “The Promise of Living,” the first-act finale from Aaron Copland’s “The Tender Land” with lyrics by Erik Johns—who lived with Copland for many years—writing under the pseudonym of Horace Everett. The opera deals with women striving for agency during the Great Depression.

In a major artistic coup, Lyric has been able to add acclaimed singer-songwriter-actor Heather Headley. Headley, with whom Peck has frequently collaborated, created the title role in “Aida,” but audiences may remember her best from her Broadway debut, when she originated the role of Nala in “The Lion King,” introducing the world to the haunting song, “Shadowland.” Peck says she had not sung the song “since she closed in it way back when. So we did a solo arrangement for voice and piano that’s like a prayer that becomes a lament. She sang that with grand piano on the stage at Lyric Opera and it’s an enormously powerful moment.”

Renée Fleming will perform a mix of new and older songs recorded at The Barns at Wolftrap. “She will be doing a surprise video duet with a guest artist,” Peck says “Of course I can’t tell you who it is, but we’re all looking forward to that. She’s singing Strauss, ‘Tis the Last Rose of Summer,’ and she’s singing a musical theater piece as well, so she’s giving you the gamut of what she does. She’s been so supportive of everything else. It’s been very beautiful to partner with her, as always.”

Most of the Lyric’s full-time staff is still on board, working to make this and future programming available to their audience and to the larger world. “We’re trying to make it as easy as possible, so our plan is threefold,” Marianna Moroz, Lyric’s public relations manager, tells me. “We’re going to stream live on our Facebook page, so if you go to Lyric Opera on Facebook, it will be the first thing that pops up on September 13. It will also be live-streamed on our YouTube page. And it will be streamed live on our website so if anybody goes to the Lyric site, they can find it right on our homepage.”

Nina Simone, Peck’s muse for this event, was an American singer, songwriter, musician, arranger and civil rights activist. Her musical work was enriched by influences from classical to jazz, from blues to pop. Peck has chosen well. The concert speaks to the spirit of the times, while balancing that gravitas with many moments of joy and celebration. In Moroz’s words, “We’re trying to make art. Everyone is. We want everyone to have Lyric in their hearts and minds, wherever they are in the world.”