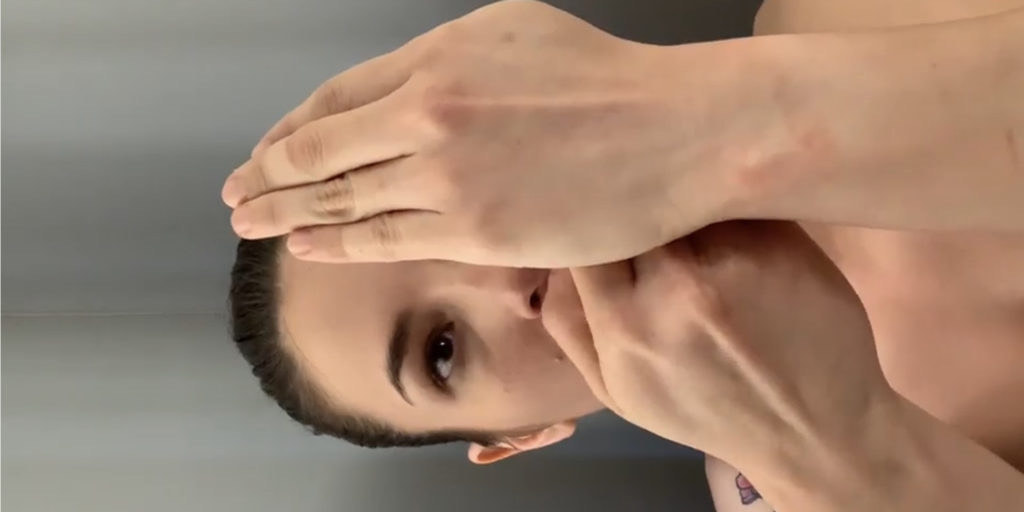 Hedwig Dances presented a one-time livestream last Saturday of a new work created for a virtual audience. “Kaos,” choreographed and directed by Rigoberto Saura, knitted four dancers, each in their respective homes, together in a performance driven by the isolated anxiety of 2020. As with the most successful dance video productions, videography and choreography were given equal import. The opening, prerecorded in black-and-white, used super-tight closeups of faces with hands coming in at odd angles, speeding up and slowing down, with quick cuts and overlays—heightened by an electronic score by Henry Labrada—set a tone of agitation and neurosis. The feed cut to livestream and a split-screen between a dancer in their room, and another reciting a poem. The low-fi quality of the video, the camera angles that seemed like an afterthought, the intimacy of watching a performer in their bedroom, and their confined movement was reminiscent of both a YouTuber confessional and a scene from a horror film.

The screen split again, this time in three. Dancers in cramped spaces, further cramped by the frame, was claustrophobic. Rarely in the thirty-five minutes of the piece did we see a body in its entirety; cameras placed on the ground or on low pieces of furniture created extreme foreshortening, the frame dismembering the performers who navigated around and over couches and beds. More than one room contained mirrors and monitors set to snow—cold, flat windows to the self and the virtual outside world bordering three-dimensional, human movement in a cage. All actual windows were covered—this may have been for the sake of lighting but, intentional or not, it added to the hermetic, bunkered atmosphere.

Before the closing section of “KAOS”—a return to the polished, pre-recorded opening theme—a penultimate, dancier section with all four performers captured full-body movement in the four-square many of us have come to associate with online gatherings… and quartets. Still, I found the most compelling moments were those where disorienting camera angles, low-fi video quality and awkward interactions of the body and the technology reflected the physical and psychological effects of long months of quarantine amidst sociopolitical upheaval.