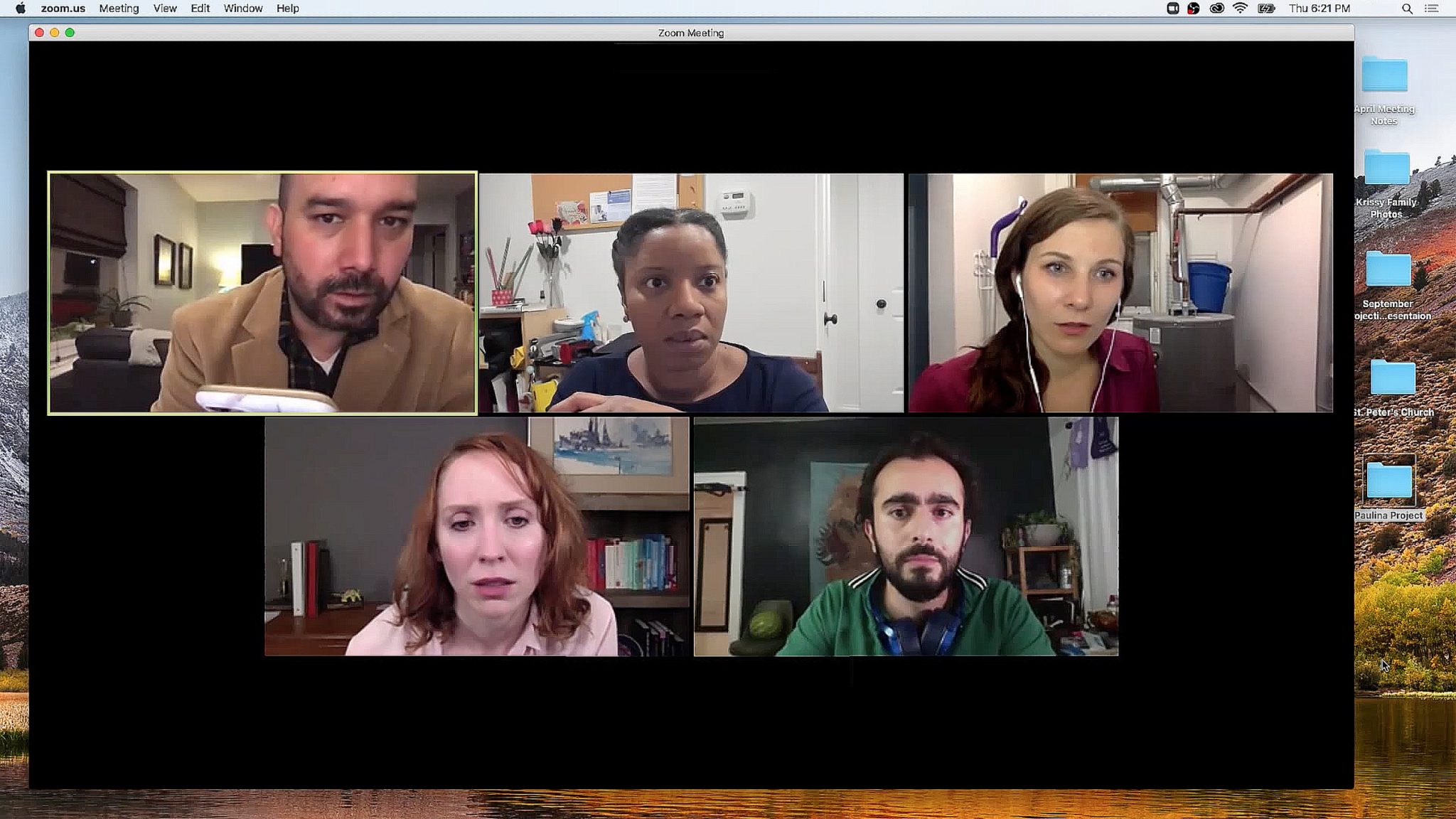 The news cycle in 2020 America has reached the point that headlines from The Onion sound more believable than those in papers of record. We have no idea how the outcome of the election that unfolds today will hit the newsstands, but one thing is certain: on both sides, win or lose, the spin doctors will be hard at work. Their dizzying efforts are the subject of director-playwright Spenser Davis’ made-for-digital play “The Spin,” debuting via Interrobang Theatre Project.

When a local politician does the unthinkable, how will his communications team distance themselves from corruption while protecting their other clients at the same time? That’s what Clark (Salar Ardebili), Deirdre (Elana Elyce), April (Sarah Gise), and Lorne (Matthew Martinez Hannon) have to figure out ahead of an on-air interview, during which they coach the mayor’s top aide K.C. (Laura Berner Taylor) through a minefield. No matter how you spin it, it’s a tricky situation.

Davis is known for being adept at capturing genuine human connections. His dialogue is always in tune with how people speak to one another, and “The Spin” is no exception. The only hindrance in this digital format is that folks are less likely to talk over one another in a Zoom call. We’ve become acclimated to speaking one at a time in meetings, and that politeness only hurts Davis’ prowess for writing realistic dialogue. “The Spin” has the snark of Davis’ “Plainclothes” without as much opportunity for talking ensemble tsunamis. Still, it’s delightful to see Davis out of his usual element. A spin on his usual dialogue, if you will.

Hannon and Elyce are the perfect traditional campaign workers to Ardebili and Gise’s new kids on the team. The dichotomy of the old and new schools are pivotal in American politics, particularly this year. The rise of social media has given every interview, talking point and campaign stop an opportunity to go viral. There are so many strings pulled at once in politics that depicting the madness online is the great way to show the intricacies to an audience.

I’ve been working on “get out the vote” campaign communications in light of the absurdity that is 2020, so I can attest that the personalities depicted in “The Spin” exist.

Even with political anxiety at an all-time high, Elyce and Taylor are quick to bring the humor. The chemistry of the entire ensemble is clear even through a screen. Being the inexperienced youth on a campaign myself, Clark’s clashes with Lorne hit home. I wanted to reach out with a virtual hug even as Clark tries to brush it off.

After watching other plays recently adapted for the screen, “The Spin” is refreshing. As awful as this year has been for live performance, it’s exciting to see artists making work specifically for digital consumption rather than adapting existing work or just recording a stage play. Zoom has its own intricacies, rules and performative qualities. Taking advantage of where we are to tell a story about what we’re up against is one of the best ways we can battle quarantine fatigue.

“The Spin” at Interrobang Theatre Project, through November 22. Streaming at interrobangtheatreproject.com, $15.