Dance is an art form that relies wholly on human interaction and bonding. In it we find the means to gather and create communities, to relate to ourselves and to critically reflect and heal through its ritual. Since the pandemic began, many of us have asked how we might interact through dance when we can’t physically connect? How can we dance alone, together?

The Dance Center of Columbia College is among many presenters, companies and artists that answered that call. In a customary season, Dance Presenting Series director Ellen Chenoweth curates performances by the most cutting-edge dance makers and dance companies in the United States and abroad. As social distancing measures shaped all of our behavior this fall, Chenoweth nimbly attuned the Dance Center’s programming to meet the needs of our time with “Dance Buffet,” an online smorgasbord of dance that stretched from September through November. The “Buffet” included virtual performances, choreographic residencies, workshops and seminars that addressed a broad swath of issues in the dance field, from decolonizing dance education, to the embodied contemplation of collectivity, to present-day remodeling of historic dance works. The series virtually dispatched Chicago-based dance artists to the Dance Center’s national and international audience and, at the same time, deepened connections within our local arts community.

While I have done my fair share of binge-watching, bread baking and home beautification projects, I also had the pleasure of participating in several “Buffet” events, which were a welcome distraction from the ambiguity and isolation we all experience daily. But the events were far more than a distraction. They provided a much-needed coping outlet and substantiated my belief that dance is a uniquely suited vehicle for grappling with the complexities of the world in all of its splendor and dissonance.

“The whole thing was completely out-of-the-box from what we normally do and how we operate,” Chenoweth said in a recent conversation about how the “Buffet” unfolded. “It was a big experiment to see what people would respond to and what would feel good in this moment. I feel like each event was so different, yet they all felt like a genuine place of connection. That was very satisfying to witness. That’s the through-line between what we do in a normal season and what we’ve done in Fall 2020.”

As a participant, this was my reaction, too. I was admittedly skeptical about the digital format and questioned whether it would depersonalize my dance experience, but this was not the case. Chenoweth selected facilitators and performers who had the capacity to extend beyond the screen and draw the participants into the “liveness” of each event.

The first and last workshops, both of which explored interconnectedness, created fitting bookends for the rest of the series. Michelle Boule, a Bessie Award-winning dance artist and creative coach originally from the Chicago area, facilitated the first event. Her workshop, “Creating Empowered Connection,” presented us with a series of creative tools based in what Boule referred to as “body listening” to create a connection with the other participants. After tapping into various aspects of our physicality, including internal rhythms and sensations, we embarked on an improvisational exchange with a partner, akin to Authentic Movement techniques developed by Mary Starks Whitehouse. Boule added her own twist via in-process queuing that was designed to trigger our individual, intuitive voices while sparking connections amongst the group.

The final workshop was in the same vein as Boule’s, but took a different approach using score-based improvisations, writing and discussion to explore three interwoven topics. “Moving From Memory: Training Towards the Ghostly, Resistant and Collective,” was led by Danielle Ross, a dance artist who moved from Portland, Oregon to Chicago four years ago to pursue her Ph.D. in performance studies at Northwestern University. The workshop was designed to explore the dancing body as a vessel of personal and shared memory, and posed the question, “How might bodily memory support radical togetherness?”

When discussing her participation in the “Buffet,” Ross said, “Anything that pulls you into community right now, even if it feels like a different form, is critical. In the workshop, we’re not pretending that we’re in a dance or performance space or that we’re in close, physical proximity—I think it’s important to fully acknowledge what we’re working with in this present moment. Artists are consistently expected to work with less than what they need, so acknowledging the reality of what we have and don’t have is important to me. Even while grappling with restrictions, I’m interested in finding new ways to see and experience the domestic. How can the texture of my floor feel different because I’m experiencing it in a more collectively charged way?”

This type of perspective shifting extended into Ross’ workshop activities. In one example, Ross prompted us to improvise while imagining a thousand people were moving in sync behind us. As I did the exercise and became the proud leader of a large army of imaginary dancing bodies, I found that every time I turned around I was at the back of a crowded sea of people, which forced an instant change of perspective in how I functioned within the group as both a leader and a follower. 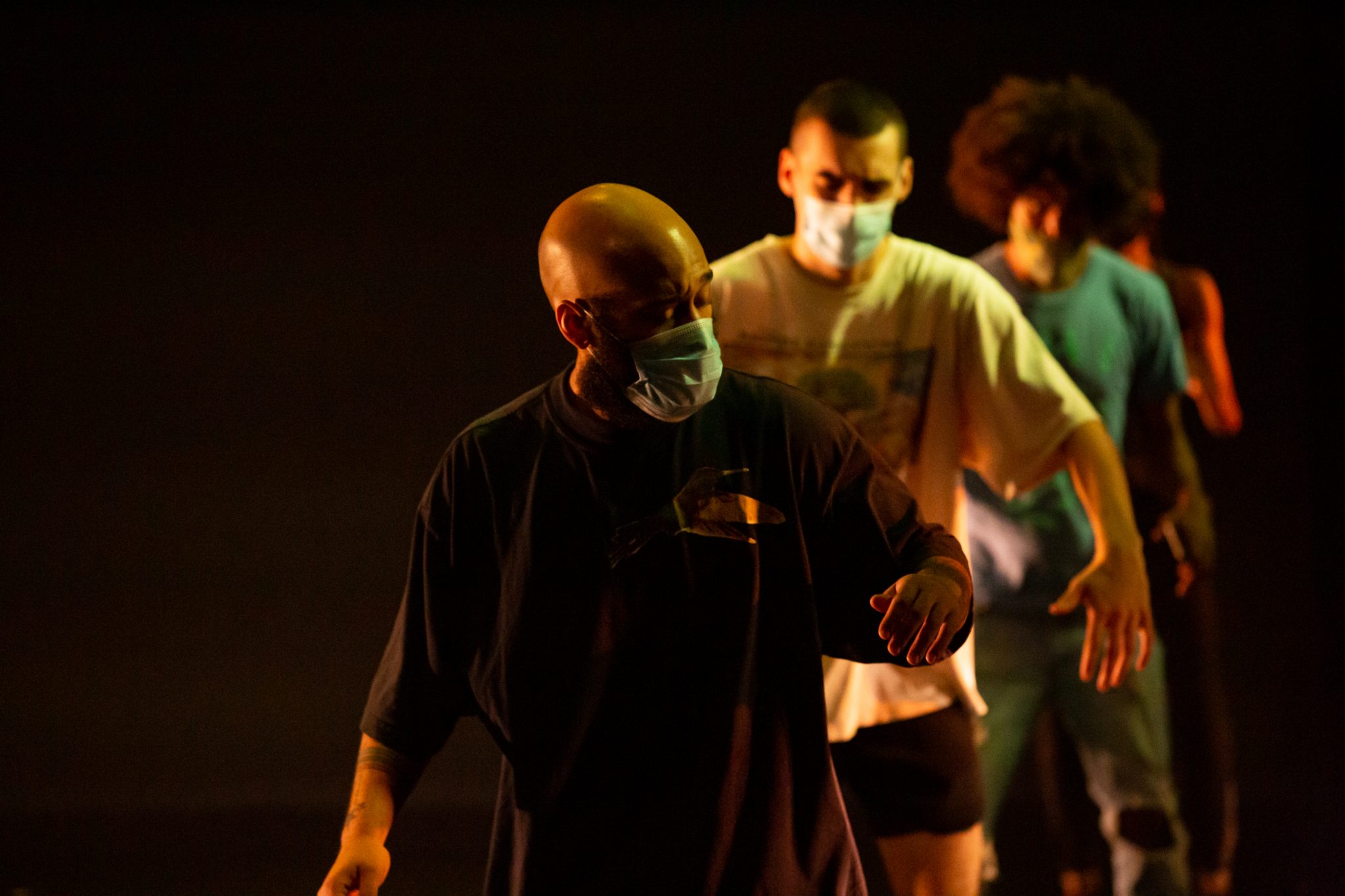 In between the workshops led by Boule and Ross were other events and performances, including two production residencies with Chicago tap artist Jumaane Taylor and German-born, Chicago-based choreographer Nejla Yatkin in the Dance Center’s black-box theater in the South Loop. Along with Chicago Dancemakers Forum, the Dance Center provided each artist with logistical and financial support for the production of a new work. Contributors to Performance Response Journal documented the artists’ processes and outcomes. During Taylor’s residency, he created a tap ensemble piece inspired by two iconic musical selections, Ornette Coleman’s “The Shape of Jazz to Come” and Igor Stravinsky’s “Rite of Spring,” which culminated in a livestream of the in-process work in early November.

Yatkin worked with composer Shamou and multimedia artist Enki Andrews to create “Other Witch,” a solo film combining dance, ritual, text, sound and music, which screened in three parts in late October. Inspired by Mary Wigman’s 1914 dance “Hexentanz” (Witch Dance), Yatkin and her collaborators created an otherworldly sensory experience that extended far beyond the screen. Each segment was paired with a moderated discussion between artists, dramaturges and viewers, providing a rich context to further understand and reflect on Yatkin’s intoxicating piece. When looking back on the work and its connection to Wigman, Yatkin said, “There are multiple layers to the ‘Other Witch.’ First, it is a response to ‘Hexentanz’ but also a departure. Second, throughout the process, I was reflecting about the role of the witch and why it was making a comeback. There is, for example, the archetype of the witch represented in Jungian psychology, the collective shadow. But, there is also the shaman, who channeled the fears and dreams of the collective into a song, dance or ritual and by doing that takes or diffuses the fears of the collective. I was moving between representing a witch, to channeling the collective shadow, to sharing an experience, to exploring otherness.”

Yatkin’s work conjured a spectral sense of bewilderment as it explored the interplay of light and shadow. This duality was a timely reminder that despite the darkness shed on the world this fall, there will also be lightness, however difficult it might be to see at present.

Now that the series has concluded, the Dance Center faculty and staff are reflecting on the unusual season as they plan for future programming. According to Chenoweth, all events will remain virtual at least until September 2021. As we all eagerly wait for a time when we can gather together in-person once again, hopefully we’ll see more imaginative virtual offerings like the “Dance Buffet.”